Looking at the writings of Shantideva, Constance Kassor explains why patience isn’t a passive tolerance of harm, completely devoid of anger. Instead, patience requires a recognition of the deep interconnectedness of the world and an active engagement with it. 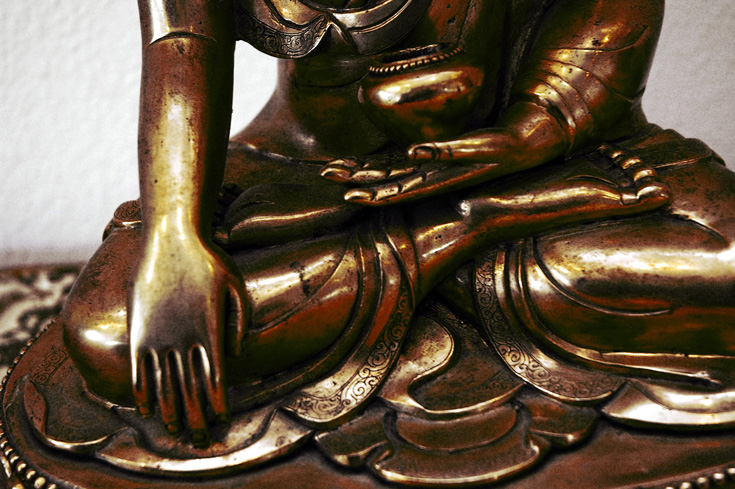 In the aftermath of Joe Biden’s win in the US presidential election, my social media feeds were flooded with calls for Biden voters to be patient with Trump supporters, or to forgive members of the Trump administration for the harms they have caused over the last four years. Implicit in these calls for patience was an assumption that quiet tolerance is somehow morally superior to the “Fuck your Feelings” attitude that the Trump administration – and many Americans – have overtly expressed in recent years.

We Buddhists love to talk about patience. Patience, or kṣānti, is one of the six perfections – the noble qualities that Mahāyāna Buddhists are expected to cultivate. Perhaps the most well-known proponent of the virtue of patience is Shantideva (Skt., Śāntideva), the 8th-century Indian monk who composed The Way of the Bodhisattva. He is often credited with explaining patience in terms of a passive tolerance of harm, completely devoid of anger. If we apply Shantideva’s teachings to our own lives, however, we can see that patience isn’t necessarily passive. In fact, in order for patience to be a virtuous quality, it must be practiced alongside an active engagement with the world.

In the sixth chapter of The Way of the Bodhisattva, Shantideva famously extolls the virtues of patiently enduring harmful situations. Imagining a hypothetical situation in which one is harmed by another person, Shantideva writes:

If I become angry at the stick-wielder
Although I am actually harmed by his stick,
Then since he, too, is secondary, being in turn incited by hatred,
I should really be angry with his hatred!

In this scenario, Shantideva urges his readers to contemplate a situation: Imagine a hateful person beating you with a stick, causing you intense physical pain. Your inclination might be to get angry at the person holding the stick. Shantideva suggests, however, that that if you analyze the situation, you will realize that it’s not the person who harmed you; it’s the stick that actually inflicted the pain. But it’s ridiculous to get angry with a stick! The stick, after all, is just an instrument without any agency of its own, being manipulated by the hateful person. If you analyze the situation even further, Shantideva suggests, then you will realize that just as the stick is under the control of the person wielding it, the person is similarly under the control of his hatred, which was produced by a number of causes and conditions. Therefore, you really shouldn’t get upset with the person who beat you, because that person is nothing more than the product of their circumstances.

There isn’t anything noble about quietly tolerating suffering without also actively working to undo the structures that caused that suffering in the first place.

Some have concluded from this argument that “good Buddhists” shouldn’t get angry. They argue that we should work hard to cultivate patience, and quietly endure difficulties, no matter what hardships might come our way. But that kind of interpretation of The Way of the Bodhisattva ignores the Mahāyāna doctrine of interdependence, and disregards suffering that is brought about due to broader, systemic causes.

Shantideva wrote about being hit with a stick because he was a person of some privilege in his world. He was an educated male, a monastic student at Nālandā, a large academic institution full of material resources. His life story does suggest that he was unpopular among his peers, and was picked on by fellow monastics, but as a privileged member of society, Shantideva did not have to struggle against systemic forms of oppression. As such, the harm that he describes in The Way of the Bodhisattva is a simplistic kind of interpersonal harm. But we can extrapolate from Shantideva’s example, and apply his understanding of patience to broader, more systemic forms of harm as well.

Shantideva is not suggesting that we should never get angry with those who cause harm. What he is really pointing out here is the need to recognize the deeply interconnected nature of the world. Patience is not the absence of anger, or the passive acceptance of harm; more than anything, we should understand that patience as a skill that allows one to pause long enough to see a situation clearly, and then respond to it accordingly.

With this in mind, we might consider Shantideva’s example of the hateful stick-wielder as a first step: When we encounter harm, rather than reacting with blind rage toward the specific person or situation that inflicted that harm, we need to clearly see that there are certain conditions – certain structures – that allowed that harm to happen in the first place. Police violence against Black people in the US is a product of racist structures. The murdering of trans people is a product of transphobic structures. The skyrocketing hospitalizations and deaths due to COVID-19 are due to capitalist and political structures. In each of these cases, I don’t think that Shantideva would suggest that we shouldn’t be angry at racist police, or at transphobic murderers, or at inept politicians. His point, rather, is that only getting angry at a specific person or a specific situation doesn’t do anything effective in the long run.

There isn’t anything noble about quietly tolerating suffering without also actively working to undo the structures that caused that suffering in the first place. Passively putting up with harmful situations in the name of patience is not a compassionate or virtuous act. The hateful stick-wielders of the world will continue to inflict harm and perpetuate suffering unless we can change the structures that allow them to cause that harm and suffering in the first place.

So, if patience isn’t passive, how can we practice patience in our own lives? We can begin by working to understand the ways in which interconnected systems of oppression exist in our society, and by learning to recognize the ways in which we contribute to those systems. Once we are able to practice patience and see things more clearly, we can begin the work of undoing those systems.

All of us will have to do this in slightly different ways. Like Shantideva, many of us have our blind spots, or our places of privilege. As a white person, it is my responsibility to learn to understand the systemic causes of racism, and the ways in which I contribute toward perpetuating those causes. Then, I can work to help undo those structures. As a queer person, on the other hand, while I can easily see – and often readily experience – certain homophobic aspects of our society, I have fewer resources at my disposal to work to change things, and so I must rely on my fellow travelers on the bodhisattva path to help undo those structures. In both of these cases, passively witnessing or experiencing harm is not useful; what must happen instead is collective action. With patience, we can all work together, in community, to undo oppressive structures and change the situations that enable people to cause others harm in the first place.

Constance Kassor Ph.D. is an assistant professor of Religious Studies at Lawrence University in Appleton, Wisconsin, where she teaches courses on Buddhist thought and Asian religious traditions, with a special interest in how Buddhism relates to questions of social justice and gender. She is the creator and voice of Religious Lessons from Asia to the World, a ten-part program on Audible. For more information visit constancekassor.net