The next book from 86-year old Zen teacher and social activist Peter Matthiessen—and what he says may be his last—draws from his experiences meditating at one of the most infamous sites of 20th century genocide, The New York Times reports. 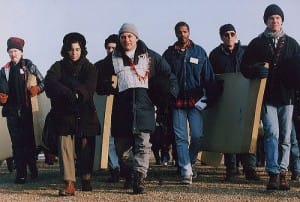 An award-winning author of more than two dozen works of fiction and non-fiction, Matthiessen has chosen the former medium for In Paradise, a novel about those who embark on “a weeklong meditation retreat at the site of a World War II concentration camp, and the grief, rage, bewildering transports and upsetting revelations that surface during their time together.”

On three different occasions, including the inaugural one in 1996, Matthiessen participated in a “Bearing Witness” meditation retreat at Nazi Germany’s notorious Auschwitz-Birkenau extermination site, at which at least 1.1 million prisoners were killed, the vast majority of them Jewish. These retreats have been organized annually by Matthiessen’s fellow Zen teacher Bernie Glassman and his Zen Peacemakers project. According to the blurb for this year’s retreat, to be held in November

“Most of each day is spent sitting by the train tracks at Birkenau, both in silence and in chanting the names of the dead. There is time to walk through the vast camps, do vigils inside women’s and children’s barracks, and memorial services. Participants meet daily in small Council groups designed to create a safe place for people to share their inner experiences. The whole group meets in the evenings to bear witness to oneness in diversity.”

The Times reveals that, “Mr. Matthiessen… said he has long wanted to write about the Holocaust, but that because he is not Jewish, he did not feel qualified. ‘But approaching it as fiction — as a novelist, an artist — I eventually decided that I did,’ he said. ‘Only fiction would allow me to probe from a variety of viewpoints the great strangeness of what I had felt.’”

In Paradise will be published by Riverhead Books in spring 2014.

Read an extensive interview here that Lion’s Roar editor Melvin McLeod conducted with Zen Peacemakers founder Bernie Glassman in 1997, the year after they began the “Bearing Witness” retreats at Auschwitz.