The words of the renowned Korean poet Ko Un offer powerful glimpses into the human condition and the paradoxes of the Buddhist path. 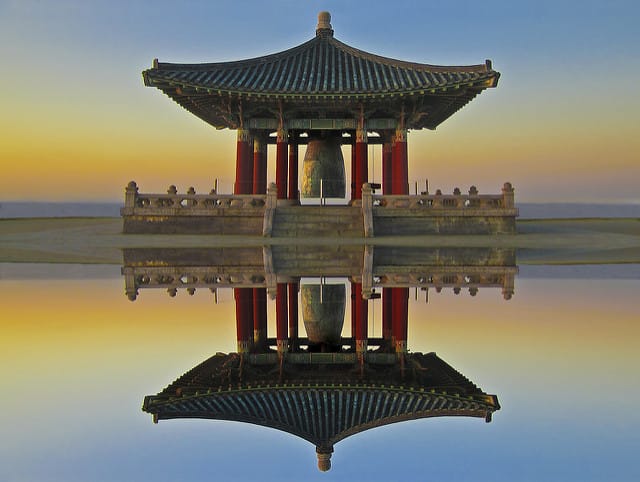 Glancing at these pages, you might get the impression that someone picked up a brush without knowing whether to write a poem or draw a drawing. A perpetual freshness permeates the atmosphere.

Hand in hand with such immediacy and spontaneity, you can freely glide through these poems like a fish unaware of the water—and suddenly be surprised by the taste of the entire ocean in just one drop: That shock of recognition. Words can point beyond words. To silence (which makes words possible). To the whole cosmos. To the luminosity of being. To the heart within the heart.

And who, you might well ask, is the particular someone creating such universal art? Lawrence Ferlinghetti has hailed him as Korea’s greatest living Zen poet. U.S. poet laureate emeritus Robert Hass writes: “Ko Un is a remarkable poet and one of the heroes of human freedom in this half century, a religious poet who got tangled by accident in the terrible accidents of modern history. But he is somebody who has been equal to the task, a feat rare among human beings.”

Ko Un came of age during the Korean War, during which he witnessed rape and murder by the Communists. On the other side, the South Korean Army executed anyone suspected of collaborating with the Communists, including some of Ko Un’s family members, neighbors, friends, and his first love. He was ordered to exhume corpses from military dugouts and wells, and to transport them on his back for many days and nights. He then attempted suicide, pouring acid in both ears, the first of four suicide attempts in his life.

The war was still on when, at age nineteen, he became a Buddhist monk. In the tradition of the first disciples of the Buddha, Ko Un later traveled the whole of postwar Korea as a mendicant pilgrim, living on alms. He recalls, “The path I followed was my own mind. … As I walked through Korea’s ravaged countryside, I made that journey meaningful in the name of pilgrimage. The road is a parable for truth. Walking or following the road was a practice of truth. The road was my absolute present.”

He became a disciple of Master Hyobong, who gave Ko Un the syllable mu to meditate on. Master Hyobong had been a judge during the Japanese occupation of Korea, when he sentenced a fellow Korean to death for a crime against Japanese law. The incident haunted him so much that he quit his job, left his wife and two children, and became a monk. Eventually, Master Hyobong became Supreme Patriarch of the Unified Jogye Order.

During his time as a monk, Ko Un helped establish Korea’s first Buddhist newspaper, and sometimes he’d fill leftover space with his poems. These reached the attention and commendation of one of Korea’s master poets, Midang. But, ultimately, Ko Un decided he couldn’t practice both Buddhism and poetry fully. He left the monastery, but not the way of the Buddha.

When he returned to the ravaged roads, he found nihilism blocking his path. Nihilism wasn’t just a philosophical concept but a daily reality in Korea’s devastated landscape, within and without. Another botched suicide attempt led him to the shores of Cheju Island, where he taught at a charity school. Then, after a decade, he discovered activism.

Ko Un came to spearhead a group of artists and writers opposed to the dictatorial military regimes ruling his nation. For this, he was incarcerated four times, once in a military prison, where he lived with the threat of each day being his last. Today, he actively supports the eventual unification of his country. You can taste that engagement in these poems and in their commonplace language—nothing precious or academic.

Ko Un is like a force of nature. To date, he’s published more than 135 books. Yet each of his poems is universal in its vivid particularity, each has its own teaching. Poem or brush drawing, whichever the moment calls for, each is unpremeditated and unrepeatable, born from the core of creation available within each moment. Tapping into the active imagination. The wellsprings of art.

The traveler along the way of art can trod the way of Buddha, the art of awakening. There’s no contradiction. It’s all an art. All an invitation to awakening. And if you look with the eyes of such an artist-poet, you might glimpse the ink still drying on the surface of these bright pages. Question: From whose brush? (Hint: That question is asked by the rain. Answered by the wind.)

A baby dragonfly perches on a bulrush tip
The entire world surrounds it, watching

What can I do?
Peach blossom petals
have been drifting all day long into the empty house

Perpetual movement!
Endless change!
You are all there is left to be enlightened about

Ah, ten years of studyÐall for nothing

Compassion is
tenderness of heart

You say the Tao is possible
without tenderness?

With that sort of Tao, what petty larceny
do you intend?

what point would there be in talking about Buddha?

The Passage of Time

Long ago
on his deathbed
the Buddha said:
“In days to come
when I am no more
I beg you, make no images of me.”
After that request
the people who had lost their master
had no choice:
the buddha was nowhere else
but in their hearts.

Everywhere they went,
no matter where, he was surely within.

But that, it seemed, was not enough.
Since he’d become enlightened at Bodhgaya
at dawn under a bodhi tree,
people took one leaf from that tree
offering it reverence
bowed down to it
joining palms before it.

Then one day some artists of Gandhara,
inspired by Greece,
carved sensuous statues of seated buddhas

to which people offered reverence,
bowed down,
palms joined.

What sound can be heard
with an ear that has never heard
a sick child groan?
The wings of autumn dragonflies vibrate soundlessly.

In a world like ours there’s plenty to do,
even for lugworms.
As the price
for one holy man’s coming
thousands of extremely
unholy men come along too.

I really wonder why the Buddha ever bothered to come.

Ox-head’s disappeared?
Horse-head’s appeared?
All those founders of Buddhist sects
said useless things all their lives

Those children are cursed by their illiteracy
while I am cursed by my ten thousand books.

Ill-advised, those who think this world
is nirvana.

How can you can make it through winter
without knowing the fragrance of winter wind?

Dreams of that fragrance
are utterly unknown
to frogs, and snakes
underground.

Utterly unknown,
and that’s the place you’ll reach in the end.

Late autumn leaves all fallen.
Branches stretching bare.
In such a season
might a dark stream be flowing underground?
My dreams are broken by the sound of water
as if a subterranean stream were surging upward.
As I listen, it fades away. But in blue night
as I try to get back to sleep, I hear it again.
Not with my ears
but with my eyes.
The depth of my eyes, one insect buzz!
No ears.
No sound.
Dawn, awakening by the darkness in my eyes.

Poems translated by Brother Anthony of Taizé, Young-moo Kim, and Gary Gach. drawings and brief poems by Ko Un from Flowers of a Moment. Copyright ©2006 by Boa Editions, Ltd. reprinted by permission of the translators. “Passage of Time,” “Since Antiquity,” “Writing,” “Winter Journey,” and “Insect Buzz” from Songs for Tomorrow: a Collection of Poems, 1961—2002. Copyright © 2006 by Green Integer. Reprinted by permission of the translators.