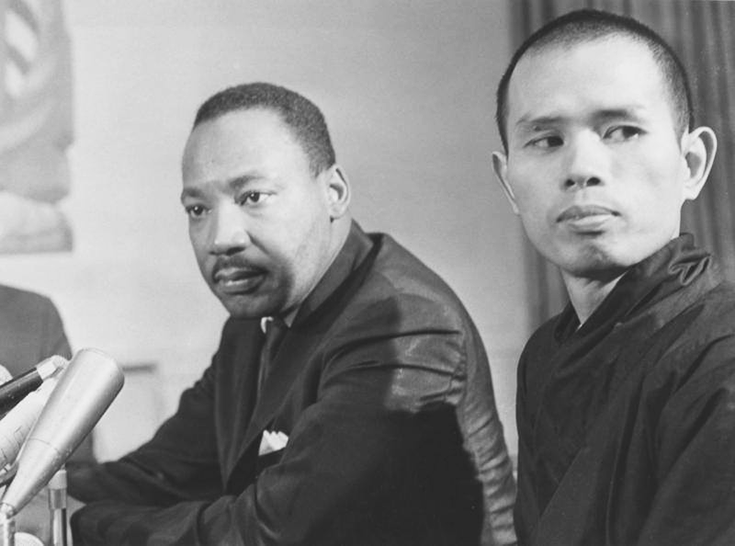 He’s taller than you’d expect—especially for a Vietnamese man—and thinner. He has big ears and huge eyes set deep into his face that give the impression that he is watching you very closely but from very far way. And he speaks so softly that you have to pay exquisite attention or miss his point entirely. Maybe that’s his ploy.

A dharma teacher friend of mine calls his brand Buddhism Lite. And I tended to agree when I first saw Thich Nhat Hanh address a packed auditorium at Berkeley High School in California in 1988. His simple message and his demure persona, especially in comparison to the personas of those who were traveling the North American Buddhism circuit at the time, convinced me that this guy was never going to catch on in the West.

Little did I know.

Many people already knew he had been nominated for a Nobel Peace Prize for his anti-Vietnam War activities, speeches, and writings. Many more knew of Vietnamese monks whose acts in demonstration against that war had galvanized anyone with a sentient heart at the time. The image of Thich Quang Duc in 1963—sitting in full lotus, sitting as still as if he were in deep meditation before a statue of the Buddha but in fact fully engulfed in flames in a Saigon plaza—was burned into our collective consciences. We were both riveted and repulsed each time we saw it on TV, in newspapers, and in magazines. The thing was, though, to do such a thing was unimaginable no matter how committed we were to ending the war. Although there seemed something inherently hypocritical for someone from a tradition whose operating paradigm was to harm no living thing to kill himself or herself in the name of peace, we all still could identify with a frustration that made us feel as if we would implode.

Thay, as he is commonly called, which means “teacher,” was a lecturer at Columbia University when he saw that image with the rest of us. He rushed home, realizing that the conflagration was about to rage out of control in the country he so dearly loved. He set harder to work. In 1965, he established the School of Youth for Social Service, a grassroots Peace Corps of sorts made up of Buddhist volunteers who rebuilt bombed villages, set up schools and medical centers, resettled homeless families, and organized agricultural cooperatives. He also set up the Order of Interbeing, the Tiep Hien Order. Tiep means “being in touch with” or “continuing.” Hien means “realizing” and “making it here and now.” I often muse on that term interbeing, reflecting a clever poet’s love of wordplay as well as a sublime comprehension of Buddhism. In the most economic fashion, the word speaks volumes about the law of cause and effect, about karma. My interpretation of interbeing: OK, fine, you practiced enough to get from “doing” to “being.” Now what are you doing with being? Wallowing in it? Or taking that wisdom a step further, to the third pearl of the refuges, to sangha. To learning how to “be” together. It expresses the Buddhist concept of interdependence, with attention to the relationship between and among people. It is the heart of socially engaged Buddhism.

A few years later, in 1967, we saw yet another widely circulated photo of yet another monk self-immolate, but this time it struck too close to home for Thay. The victim was Nhat Chi Mai, a nun who had been one of the first six members ordained into the Tiep Hien Order. She wrote in her last note, “I offer my body as a torch to dissipate the dark, to waken love among men, to give peace to Vietnam.” The date of her death was May 16, 1967.

Only a few months earlier, on January 25, the Rev. Martin Luther King, the Nobel Laureate of 1964, had written the letter recommending Thay for the same prize. The irony alone would have debilitated a man with less fortitude: to be thus honored and then four months later to see the war escalating, to witness his close followers forfeiting their lives to awaken people to the plight of Vietnam.

But Thich Nhat Hanh pressed on. Even after the Paris Peace Accord was signed in 1973 and the Vietnamese government denied Thay entry back into the country, he led efforts from France, where he lived in exile, to rescue his fellow citizens, who were fleeing his homeland and floated in boats in the Gulf of Siam. When the government forced him to stop, he established the Unified Buddhist Church in France. By 1982, with growing support, he and his longtime colleague Sister Chan Khong founded Plum Village as a place to conduct retreats and workshops and seminars on peace negotiation and conflict resolution. The work goes on to this day.

I met Rev. Hanh at Plum Village in the south of France, ninety kilometers east of Bordeaux, a region more famous to devotees of the god Bacchus than of the Buddha. We sat inside his cottage, which overlooks a patchwork quilt of rich green vineyards interspersed with radiant yellow sunflowers—a scene that would have made Van Gogh run for his easel. He had accepted my request for an interview for an article I was writing for no less prestigious a magazine than National Geographic on one condition, a condition he requires of all journalists no matter how prestigious the publication. First, I had to sit his retreat, then I could conduct the interview. I welcomed the chance to sit. I was exhausted from a twenty-week road trip following the footsteps of the growing worldwide engaged Buddhism movement, set in motion by Thich Nhat Hanh, and I needed a place to collect my wits, to marinate in meditation. I got there as a retreat was in progress for the Vietnamese Diaspora, which was very much a cultural in-gathering of families and friends who had settled in far-flung Western countries after 1975. I tried to let go of my disappointment that my own schedule made me miss the previous week, when Thay and Sister Chan Khong led conflict-negotiation workshops for Israelis and Palestinians. The journalist in me knew that would have generated terrifically sensational dynamic tension, the stuff on which reporters thrive. As it turned out, I was at precisely the right place at precisely the right time with precisely the right people.

Though I have attended close to twenty retreats over the years, I had not participated in one of Thich Nhat Hanh’s. But that was not why I felt like a fish out of water. I felt little in common with Vietnamese people. I had never been to Vietnam. I knew little to nothing about their culture, except that I loved their spring rolls. Though I had protested the war in Vietnam, had been tear gassed at Dupont Circle in Washington in 1969, had seen them on television through the sixties and early seventies, their faces speaking the international language of grief and terror, I had never actually met a Vietnamese person.

But over several days, the Vietnamese at Plum Village won my heart with their warmth and compassion; with their good humor, curiosity, and intelligence; with their friendliness after some initial shyness (and with their still-delicious spring rolls). They exemplify the human condition, of both the dark and the light side: they have suffered immeasurably, yet they continue to have hope.

Between the sitting sessions, Thay’s dharma talks took me somewhat aback, to be honest. Knowing his influential role in spearheading a more socially and politically relevant Buddhism, I was surprised that his talks were about everyday mundane relationships—about open communication between parents and children, about keeping love fresh between husband and wife, about the importance of non-discrimination and mutual understanding in the increasing number of relationships between couples of different religious and cultural backgrounds.

By then I’d already interviewed some of the great Buddhist leaders and religious thinkers of the world—Robert Thurman, Joseph Goldstein, Huston Smith, Mark Epstein, S.N. Goenka, Reggie Ray, even His Holiness the Dalai Lama—and had come to expect nothing less than highly relevant profundity in such lectures, Buddhology at its best.

“Aren’t there enough relationship gurus?” I asked when we met. I was thinking of Dr. Phil, John Gray, Oprah, and others who impart their versions of “truth” on us between commercial breaks, in books, in books-on-tape, on DVDs and videos ad nauseam. “Aren’t there more important issues to discuss?”

“Such as war, violence, death, economic problems, terrorism?” he asked rhetorically. My tape recorder strained as much as me to hear his softly spoken and carefully selected words. “The conflict in the Middle East, tension between religious groups—these are about relationships. The Buddha identified ignorance as the second noble truth. We create ignorance through poor communication. Misunderstanding begins in the microcosm, between two people. It creates fear, and fear creates violence. When you act with violence and anger, you create more violence and anger. The majority of the people who come here suffer from relationship, health, and work problems. But if your relationship is good, then you are happy, your health improves, and you’ll be more successful in your enterprise.”

I had forgotten, as we all so often forget, that profundity comes in the simplest truths. And, in the manner of the dharma teachers, Thay brought his abiding message back to the cushion.

“It all starts with a spin on an old adage: ‘Don’t just do something; sit there,’” he said. “With all this socially engaged work, first you must learn what the Buddha learned, to still the mind. Then you don’t take action; action takes you.”

Action of that quality has guided and informed the missions of the Buddhist Peace Fellowship, the International Network of Engaged Buddhists, the Zen Hospice Project, the Sarvadoya Shramadana Movement of Sri Lanka, and so many more that its truth and wisdom are undeniable. Those groups, their leaders, and I symbolically circumambulate the lotus pond at Plum Village in honor of the foundational work of Thich Nhat Hanh, Sister Chan Khong, and their Tiep Hien Order.

Perry Garfinkel is the author of “Buddha or Bust: In Search of Truth, Meaning, Happiness and the Man Who Found Them All” (Three Rivers Press, 2007).