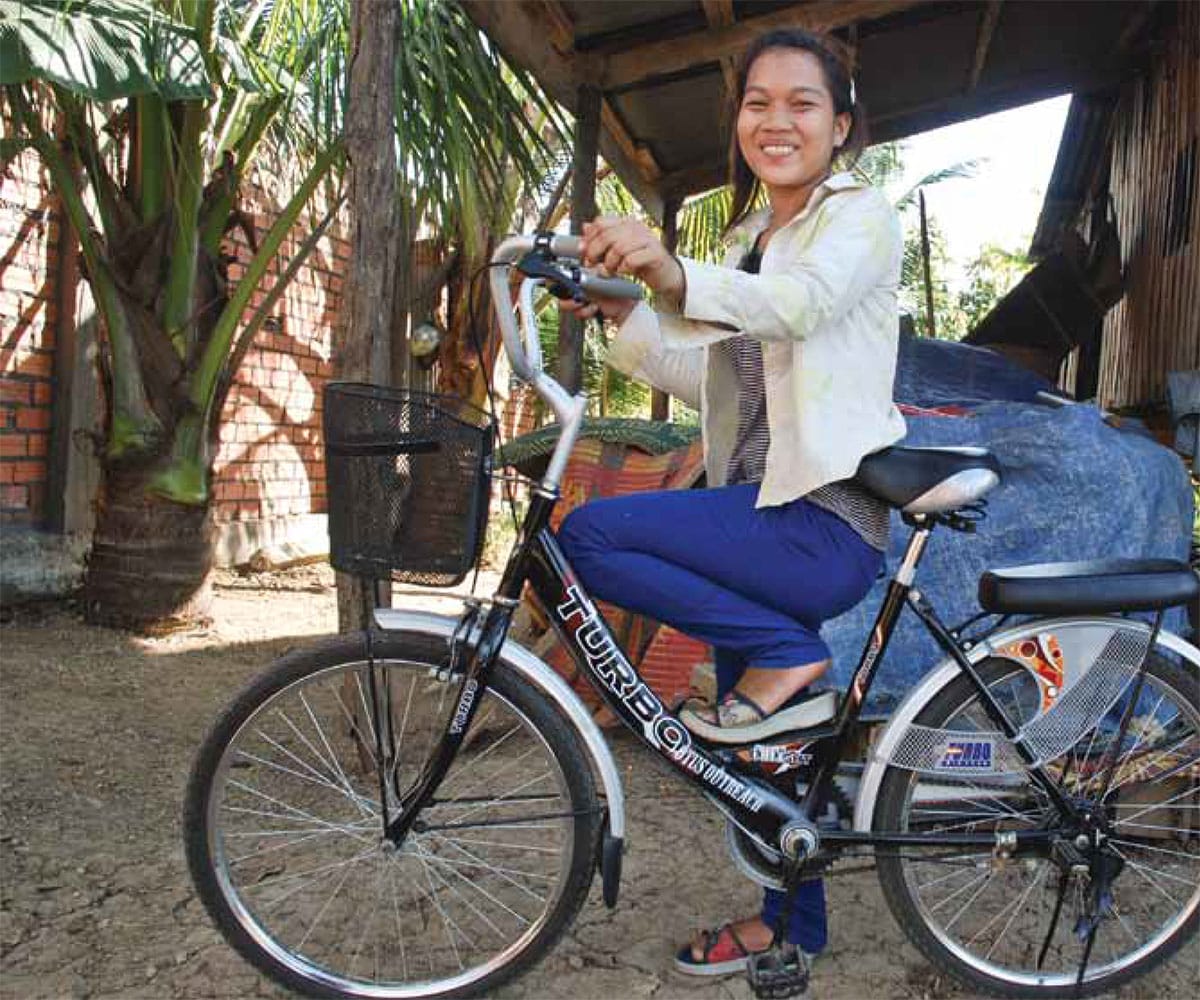 Rina Long, an intelligent and ambitious teenager from Cambodia, had always wanted to become a doctor. Then her father died, leaving the family in poverty, and Rina’s future suddenly looked grim.

It seemed that there was no other option but to drop out of school and seek employment in Korea, where—with her lack of job skills—she almost certainly would have been forced into prostitution.

Working in partnership, two humanitarian organizations, Buddhist Global Relief (BGR) and Lotus Outreach International, intervened. As they do for other Cambodian girls in similar situations, they began providing Rina with some of the expenses associated with education, including school supplies, uniforms, and transportation. BGR also began providing her with food assistance so her family would be motivated to keep her in school. This support has enabled Rina to stick to her goal of becoming a doctor and she is expected to graduate from high school next year.

In addition to supporting the education of at-risk and exploited girls in Cambodia, BGR is now involved with a similar program in Vietnam. But the scope of its relief projects goes beyond education. Among other initiatives, they have assisted Myanmar cyclone victims; aided internally displaced people in Sri Lanka; fed hospital patients in Vietnam; and provided emergency food parcels in South Africa.

Ven. Bhikkhu Bodhi is the chair of Buddhist Global Relief and the inspiration behind it. In 2004, when the tsunami struck Southern Asia, he decided to do something to help the people in Sri Lanka and he sent an appeal for donations to all his dharma friends. Within two weeks, they had collected $160,000 and set about finding nonprofits to give the money to.

Over the next few years, the lack of Buddhist relief organizations played on Bhikkhu Bodhi’s mind. Then he wrote a commentary for the Fall 2007 issue of Buddhadharma, urging American Buddhists to move beyond simply talking about loving-kindness and compassion and to become active in alleviating the suffering of the world’s poor and disenfranchised. The message was blunt:

We Western Buddhists tend to dwell in a cognitive space that defines the first noble truth largely against the background of our middle-class lifestyles: as the gnawing of discontent; the ennui of over-satiation; the pain of unfulfilling relationships; or, with a bow to Buddhist theory, as bondage to the round of rebirths. Too often, I feel, our focus on these aspects of dukkha has made us oblivious to the vast, catastrophic suffering that daily overwhelms three-fourths of the world’s population… If Buddhism in the West becomes solely a means to pursue personal spiritual growth, I am apprehensive that it may evolve in a one-sided way and thus fulfill only half its potential. Attracting the affluent and the educated, it will provide a congenial home for the intellectual and cultural elite, but it will risk turning the quest for enlightenment into a private journey that, in the face of the immense suffering which daily hounds countless human lives, can present only a resigned quietism.

Some of Bhikkhu Bodhi’s students were inspired to take up the challenge and by June 2008 they had formally established Buddhist Global Relief and had it registered as a corporation in New Jersey. BGR, however, does not have an office or headquarters in New Jersey, or anywhere else. It is a volunteer organization and the volunteers, who are based across the globe, work out of their homes. BGR staff do not themselves do work in the field, rather, for each project that BGR is involved with, they team up with a partner organization that is already working in the country they seek to help. BGR’s approach keeps overhead and administrative costs to a minimum and maximizes their efficiency.

The long-range goal of Buddhist Global Relief is to combat all manifestations of poverty. However, Bhikkhu Bodhi said, the specific mission is to focus on hunger and chronic malnutrition because “the Buddha himself said that hunger is the worst illness and that the gift of food is the gift of life.”

Every year, ten million people die from hunger and malnutrition—more than half of them children. “The most stubborn roots of poverty and hunger lie in the lack of education,” said executive director Kim Behan, so BGR addresses hunger and malnutrition by fostering education as well as by giving food aid and assisting with agricultural development.

In its first year, BGR exclusively funded projects in Southeast Asian Buddhist countries. It began expanding its scope when it teamed up with Helen Keller International to provide micronutrients such as iodine, iron, and vitamin A in Niger and Mali. “Many people in West Africa go blind or die because of a lack of sufficient micronutrients,” said Bhikkhu Bodhi. “The micronutrient supplements themselves are not very expensive, but it is important to get people who are trained to distribute them and to see that they’re administered properly. So we sponsored this project to train people.”

After that, BGR also began to sponsor projects in Central Asia, and more recently it got involved with projects in Haiti and the United States. “We were doing a lot of work internationally,” Kim Behan said, “but donors were asking what we were doing here at home. There is a lot of poverty right here.”

This U.S. project that BGR sponsored was done in conjunction with Golden Harvest, a nonprofit farm run by volunteers. Through its Adopt-a-Plot Program in Maryland, Garden Harvest is providing local emergency food agencies with a means to ensure a steady supply of nutritious produce. Participating agencies choose a plot of land and, with the help of volunteers, they grow food for the people they serve and give any surplus to smaller agencies. A grant from BGR enabled the Adopt-a-Plot Program to feed thousands of people living in poverty in Maryland and Pennsylvania.

In Haiti, BGR is providing four thousand meals a month to several hundred children displaced by earthquake damage who are still living in tent cities and squatter communities. The grant is for six months’ worth of food and it is likely to be renewed. Patricia Price, one of BGR’s board of directors and a former employee of CARE, said helping Haiti was particularly urgent. “Of all the places I have ever visited,” she said, “Haiti is the one place that still shows up in my nightmares. The fact that Haiti is in the condition it’s in at this time in history is shameful, and it’s in our backyard.”

Though Price is on the BGR board, she’s a practicing Jew, not a Buddhist. Embracing diversity, BGR welcomes people of all faiths and all branches of Buddhism.

In July 2010, BGR was invited to join a task force called the Global Initiative for Faith, Health, and Development, which was established at the National Cathedral in Washington by the Center for Interfaith Action on Global Poverty. Last year, the task force held meetings at the White House to prepare a framework for enhancing the role of faith-based organizations in international development. Bhikkhu Bodhi and Behan participated in these landmark meetings with people of other faiths. Now BGR is looking into the possibility of collaborating on aid projects with Muslim, Christian, and Jewish organizations.

Looking to the future, Behan hopes Buddhist Global Relief will help create a new culture of giving, whereby the people they help will in turn help other people. She says, “I hope it’s like we throw a stone into the water and the circles keep expanding.”