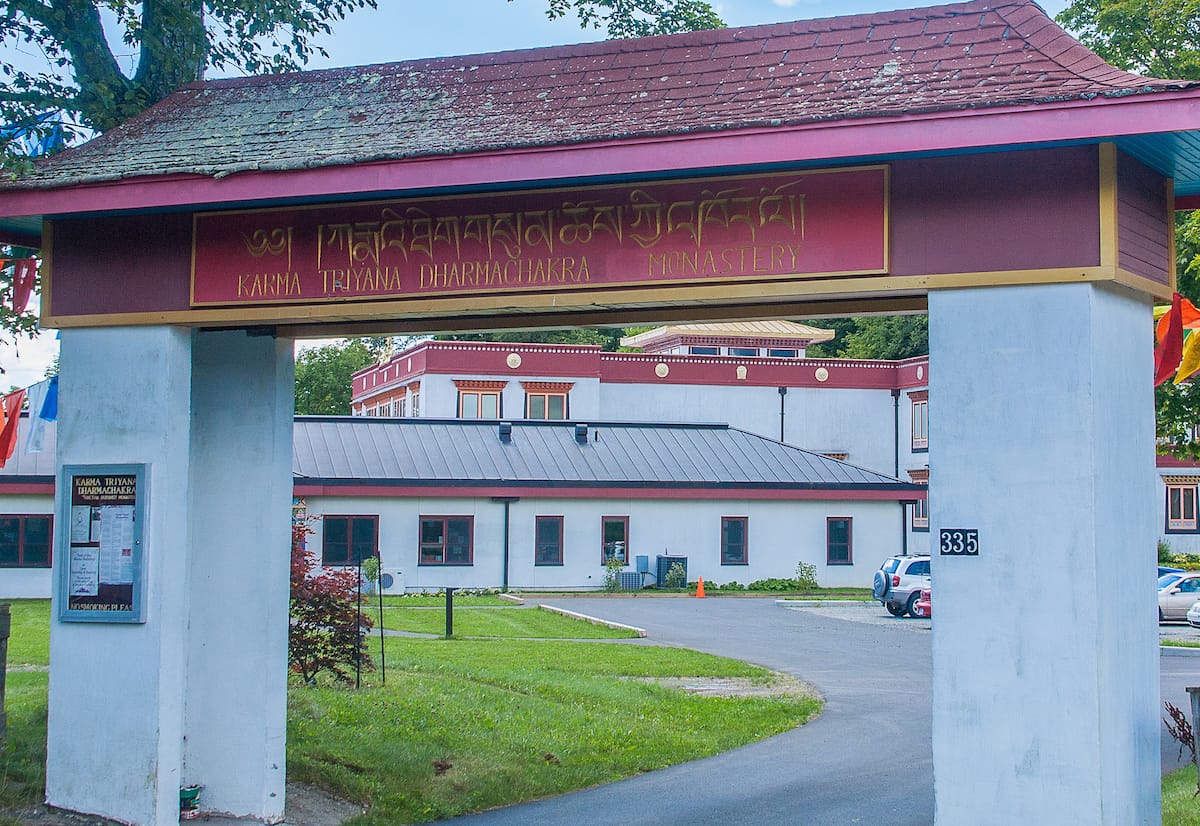 A year before his death in 1981, His Holiness the Sixteenth Karmapa, head of the Karma Kagyu school of Tibetan Buddhism, was traveling in the United States on what would become his last world tour. At that time, he showed some of his students a sketch he had made years before. It depicted what His Holiness envisioned for his principal seat in the Western world: a fully functioning Tibetan-style monastery in a North American setting. Now, more than twenty-five years later, his vision – Karma Triyana Dharmachakra (KTD) – is on the verge of completion.

KTD offers daily practice sessions that are open to the public, and on most weekends it offers programs that range from introductory presentations to in-depth instruction in Vajrayana view and method. The monastery houses the Karma Kagyu Institute, which provides a showcase for Tibetan art, offers Tibetan language classes, makes recordings of sacred music, produces DVD lectures, and publishes works of Tibetan literature and philosophy. A few minutes’ drive away, KTD also maintains a center for traditional three-year retreats.

The Sixteenth Karmapa felt that the site of the KTD monastery, near Woodstock, New York, in a well-watered valley that offers exquisite views of the Catskills, had features that indicated it would be an auspicious location for a contemplative center. “The local people always considered these twenty-three acres special,” says Patrick Cliett, the KTD project manager, “and they never built much here.”

At the time of the purchase in 1979, the only large building on the property was the Meads Mountain House, a twenty- two-bedroom inn built in the nineteenth century for summer getaways. Since the wooden structure wasn’t insulated and was heated with woodstoves, one of KTD’s first priorites was to winterize the former inn, since it would be needed to serve many essential functions. To this day it houses the dharma supply shop, kitchen, dining hall, residencies, and offices. Until the current shrine building was completed in 1992, the house was also where guests and members practiced.

The shrine building, modeled after the Tolung Tsurphu Monastery in Tibet, took ten long years to build, says Thomas Schmidt, the external affairs officer, because staff and volunteers did both the fundraising and almost all of the grunt work. “We bought a backhoe and I helped lay the pipes and build the septic field,” Schmidt says. “And Bardor Tulku Rinpoche and a fellow Tibetan spent several years laying every single cinder block.”

The hard work paid off, and today the shrine building boasts columns with wing-like decorations; a cupola with a gold-colored roof; windows accented with double dorjes (a traditional Tibetan logo that symbolizes the indestructibility of dharma); and dharmachakra wheels. In fact, the shrine building is so authentically Tibetan that only one thing separates it from its Asian counterparts: it was built using modern Western techniques. Made of mostly fireproof materials and supported by concrete and steel, the building is nearly maintenance free and will hold up for a very long time.

KTD is now in the process of constructing a building to replace the Meads Mountain House, which was never intended to last this long under regular year-round use. “It has certain inherent structural problems,” says Cliett, “which means it’s not up to current safety require- ments.” It also isn’t nearly big enough. The building that replaces it will provide KTD with an expanded residency, dining and administrative facilities, a large library and dharma supply shop, an art gallery, additional shrines, a yoga room, and a 10,000-square-foot courtyard paved with decorated Tibetan tiles. Its completion will represent the culmination of the Sixteenth Karmapa’s vision.

Cliett began working on the design of this new building in 1995, but construction didn’t get under way until October 2005 because there were difficulties in obtaining the building permits. “A small group of people – eighty-five    percent    of    whom    lived on the same road as KTD – had some concerns that were initially legitimate,” says Cliett. “First, they were worried about how much water we would use and, second, they were worried about increased traffic. But we did extensive hydrology and traffic studies and, after four years, the approvals went through.”

According to the KTD operations officer, Byron Coulter, people in the surrounding area feared change. “Woodstock is small, so a large monastery moving in could have had a big effect,” he says. “But I don’t think we’ve changed the nature of the town, and I don’t think we will.” Local residents now seem to agree, and they have developed a good relationship with KTD over the years of the building campaign.

Last September, the monastery offered a gift to Woodstock: a free talk by the Dalai Lama. To prevent crowds from overwhelming the town, the talk was not publicly announced until the last minute. Still, news traveled by word of mouth and between 2,000 and 3,000 people attended. To celebrate the International Day of Peace established by the United Nations, the Dalai Lama spoke about developing peace in the heart. “It was just a perfect day,” says Coulter. “The event was held outdoors and the weather was beautiful. The adults were sitting on the grass and the children were playing. I have heard nothing but positive reports.”

KTD is now looking forward to another important visit. The Seventeenth Karmapa, who at twenty-one has never seen his North American seat, is expected to visit in the near future. No one knows for certain when that visit will take place. “But it will happen sometime,” says Coulter. “It is just a question of when. Though he has not been able to travel outside of India yet, when he is able to this will be one of the first places he comes, and that’s what we’re focusing on now.”

In anticipation of an eventual visit by the Karmapa, KTD is trying finish the building work as soon as possible, hope- fully by this summer or fall. “We’re trying to complete the building with donations, so we can keep our financial liabilities down,” Cliett says. “If we have to take out a construction loan for several million dollars, we would have to raise our rates, and then a lot of sangha members could not afford to come.” Thus far, however, KTD has been very successful in gathering donations, and it currently has 75 percent of the necessary funds.

When asked what his other goals are for KTD’s future, Cliett says he just hopes that the monastery will be able to continue doing what it has been doing. “In the 1970s, when I got involved with Buddhism, it was difficult to even find dharma books,” he says. “Now I am so impressed to see how the dharma has flourished. As the main seat of the Kagyu lineage in North America, KTD has played an important role in that flourishing.”