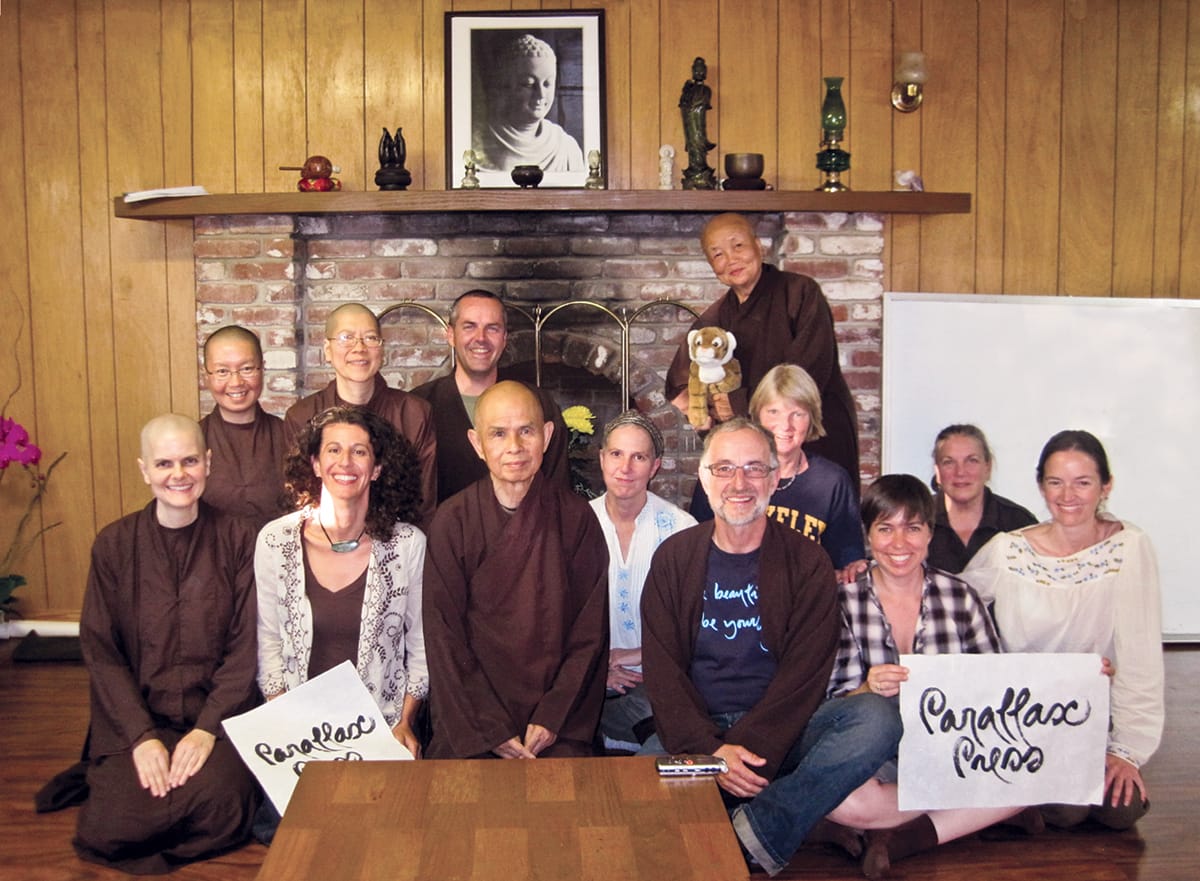 During his 1985 American teaching tour, Thich Nhat Hanh and about a dozen retreatants were in a small room at the Providence Zen Center when he suggested to longtime Zen practitioner Arnie Kotler that they start a publishing company. Kotler agreed, and over the next eighteen months he established the infrastructure of Parallax Press and transcribed and edited some of Thich Nhat Hanh’s lectures into what would become the landmark book Being Peace.

“When the first 5,000 copies were delivered, it felt like giving birth,” Kotler wrote in the Spring 2007 issue of Inquiring Mind. “I kept the trunk of my car filled with books and felt joy and gratitude as Bookpeople agreed to distribute copies, Black Oak Books put them on a front table, and retreatants in Santa Barbara and other cities where Thich Nhat Hanh taught purchased copies directly from the publisher. Parallax Press was up and running.”

Now, Parallax is celebrating its twenty-fifth anniversary. Being Peace is in its fourteenth printing and Parallax—based in Berkeley, California—releases about a dozen titles a year. As the publishing arm of Thich Nhat Hanh’s Unified Buddhist Church, Parallax has been instrumental in spreading his teachings. It is the core publisher of his books, as well as the books of other teachers dedicated to socially engaged Buddhism. Among its notable authors are Joanna Macy, a Buddhist ecophilosopher with five decades of activism under her belt; Sulak Sivaraksa, a prominent Thai intellectual and social critic who founded the International Network of Engaged Buddhists; and Robert Aitken, the late American Zen pioneer who cofounded the Buddhist Peace Fellowship.

Plum Blossom Books is an imprint of Parallax Press that’s dedicated to publishing books on mindfulness and peace education for children and young adults. Plum Blossom’s most recent release is Gail Silver’s lovingly illustrated Steps and Stones, a story about a hairy, red monster that teaches a boy named Anh how to count his steps and coordinate them with his breath, transforming anger into a peaceful walk. Most of Plum Blossom’s releases are children’s books by Thich Nhat Hanh, such as The Hermit and the Well, The Coconut Monk, and A Pebble for Your Pocket.

Thich Nhat Hanh’s teachings are meant to be of help to you where you are right now, as opposed to trying to get you someplace,” says senior editor Rachel Neumann. “His teachings start with something that is common sense—it makes sense to people right away without a lot of arguing or convincing— but then when people try to practice it, they feel a need for more teachings.” Parallax’s other authors, she says, also start with teachings that are simple on the surface but are in reality incredibly challenging to practice.

Parallax has a series of books geared to a readership of longtime practitioners, but in the last ten years it has put a push on publishing titles aimed at a more mainstream audience. Neumann points to Child’s Mind as an example. Written by Christopher Willard, it’s a guide to practicing mindfulness with children. “He’s a psychotherapist with a broad knowledge of Buddhism,” Neumann says, “and he incorporates a lot of Buddhist techniques and translates them into a language that works for parents and teachers and educators of any background.” An upcoming book on mindful gardening and another on relationships are two additional titles Neumann thinks will have a wide reach.

Neumann would like to see a world in which no one thinks that mindfulness is “too hippie or too Buddhist” for them, and her hope for Parallax’s next twenty-five years is that it can help make mindfulness a large and positive force in society by continuing to find ways of breaking down people’s barriers to mindful living.

“In the past ten years,” she says, “there has been a huge increase in awareness around mindfulness and it is no longer associated specifically with Buddhism or specifically with Thich Nhat Hanh.” That blossoming is wonderful—a big leap forward—as long as it doesn’t lead to a watering down, Neumann says. She believes that Parallax, given its strong background in presenting the teachings of Thich Nhat Hanh, plays an important role in maintaining the integrity of the true meaning of mindfulness.

Since mindfulness and interbeing are at the heart of its books, Parallax is dedicated to creating a workplace that reflects this. “We start our workday with half an hour of reflective time, which we spend together,” says Travis Masch, who has been Parallax’s publisher since Kotler left in 1999. One person rings a bell and the staff gathers in Neumann’s office. They take their seats in a snug circle of zafus on the floor and sit for fifteen minutes—a candle burning and incense smoke curling to the ceiling. After that, they have a fifteenminute check-in to update each other on projects.

“We also have a day of mindfulness three or four times a year where we practice together as a staff outside of the office,” Masch says. “That might entail us meeting at a park or green area around Berkeley and practicing walking meditation together, or it might entail going to Green Gulch Farm or the seaside to meditate and spend the day together developing our practice—and our connection as staff members, beyond working together.”

“We have really made Parallax into a sangha,” Neumann says, “a community where we are trying to work in the way we want the world to be. It’s a working environment that honors the whole of people. We ask ourselves if what we’re doing is good for the world, as opposed to just a good business practice for profit.”

The word “parallax” is derived from a Greek word meaning “alteration,” alluding to how when you change the way you look at something, the thing itself appears to be different. Because the word “parallax” is of Western origin, yet conveys one of the deepest meanings of Buddhism, it’s an appropriate moniker for a publishing house that translates Buddhist concepts into a modern English idiom.