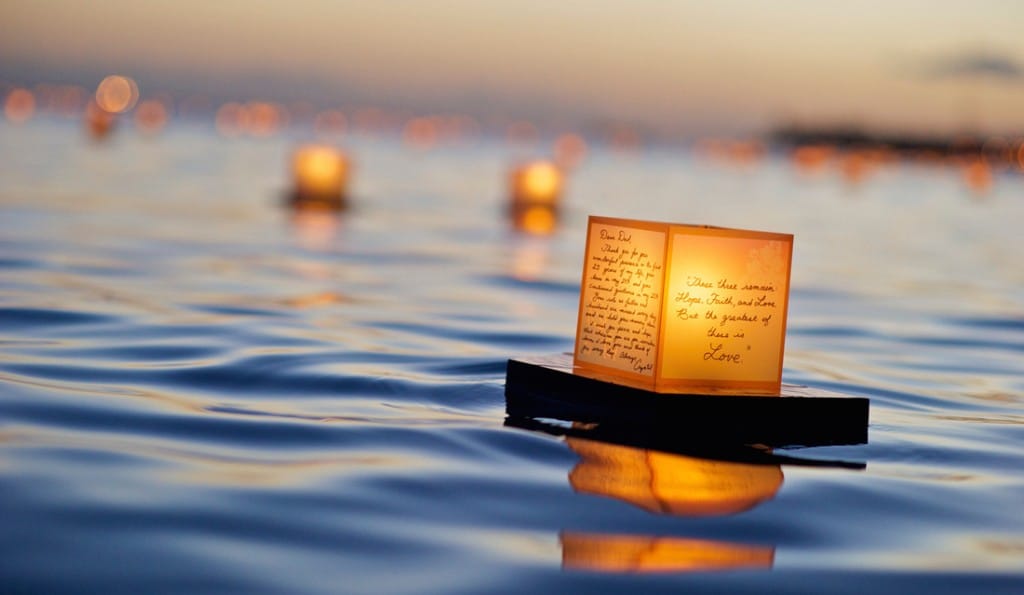 As Honolulu’s nearby skyscrapers gleamed pink in the late afternoon light, forty thou­sand people gathered in Ala Moana Beach Park on Memorial Day 2012. The festivities unfolded with taiko drumming, hula dancing, and traditional Hawaiian chanting. Then at twi­light, Shinso Ito, the leader of the Japanese Bud­dhist organization Shinnyo-en, took the podium, her bright orange robes contrasting with the pur­pling sky. The huge assembly filling the beach before her had come to participate in a toro nagashi, a Japanese lantern-floating ceremony to honor and commemorate the dead. After a brief address welcoming the crowd and explain­ing the ceremony, she ritually blessed and purified the lanterns and sounded a bell. The thousands of participants then waded into the water with their glowing paper lanterns, each inscribed with personal messages and prayers for the dead. With the hope that the deceased would move toward enlightenment with the tide, the participants released their lanterns into the waves.

Since 1999, Shinnyo-en has held a lantern-floating ceremony in Honolulu every Memorial Day weekend, giving special thought to those who have died in war and to victims of natural disasters, famine, and disease. It has grown into a popular event that reaches far beyond the local Buddhist population. While it is not well known in American Buddhist circles, Shinnyo-en now counts more than one million members, mostly in Japan. An independent lay Buddhist order founded in 1936 by Shinso Ito’s father, Shinjo, and mother, Tomoji, the organization now has centers scattered across the globe, including six in the United States. Shinso Ito assumed her role as the head priest of Shinnyo-en in 1989, and today she remains one of the few women to have ever attained daisojo, the highest priestly rank of Japanese Shingon Buddhism.

Shinjo Ito was originally an aircraft engineer, but he believed that despite the great advance­ments in modern engineering, technology did not have all the answers. He pursued monastic training in Shingon, a Japanese tantric Buddhist tradition that was founded in the ninth century, and eventually received the highest transmissions for laity and priests in the Daigo order of Shingon. While he had great respect for the teachings of Shingon, it troubled Ito that the Shin­gon path was geared toward monas­tics and priests and thereby limited the number of people who could attain enlightenment. Shinnyo-en took shape in the period following World War II, a time of anxiety and uncertainty for many people in Japan. “Shinjo wanted to help them lead a mentally more stable life through Buddhism,” his daughter explains. “This was why he founded a form of training that did not just allow lay practitioners to participate alongside monastics. Rather, the fact that one was a layperson—that in itself—defined the path.”

Following this, Shinjo Ito came to emphasize the teachings of Mahaparin­irvana Sutra, one of the most important texts of Mahayana Buddhism in East Asia. Believing that it encompassed the teachings of Shingon and made them accessible to laypeople, he made this sutra the backbone of the Shinnyo-en teachings. But the new organization that Shinjo and Tomoji Ito founded also had important roots in another lineage as well, one that was outside of institu­tional Buddhism. “Tomoji’s conviction,” says Shinso Ito, “came in part from a spiritual faculty she’d inherited from her maternal relatives, in particular her grandmother and aunt, who had used their spiritual abilities to help others based on religious principles inspired by the Lotus Sutra.” This spiritual fac­ulty involved communicating with the spirit world, a realm that is tied to tra­ditions of ancestor worship and is part of the doctrinal beliefs of many Japa­nese religious traditions. According to Shinjo Ito, this was a means of accessing a spiritual dimension related to the deep layers of consciousness (vijnana): the eighth (alaya) and ninth (amala) levels of consciousness described in Mahay­ana Buddhism as the “storehouse” and “untainted” layers, respectively. The alaya level contains the seeds of both positive and negative potentials or karma, while the amala layer is the pure realm of buddha-mind, or enlightened wisdom. By accessing this buddha-mind, one can in turn serve as a spiritual guide, helping others touch into it as well.

The important role of this practice in Shinnyo-en is most evident in its princi­pal meditative training, called sesshin, which its members translate as “touch­ing the essence.” (The same word is used in Japanese Zen traditions, but there it refers to particular long periods of inten­sive meditation.) Shinnyo-en members practice two types of sesshin, called structured and unstructured. In struc­tured sesshin, which is only practiced at Shinnyo-en temples, spiritual guides sit across from individual participants during meditation. These guides offer reflections and advice on practice and life, spending three to five minutes with each person. “It’s a union that takes place so that the person who is medi­tating is guided to further deepen their meditation and to look at themselves more objectively,” says Nichelle Madri­gal, an American Shinnyo-en priest. As such, it is not a conversation between participant and guide but rather an opportunity for the participant to listen and contemplate in order to experience one’s own innate wisdom.

The insights found in structured sesshin inform unstructured sesshin, a practice of reflecting on daily life and applying the teachings to one’s every­day activities. As Patrick O’Connor, a spiritual guide in the tradition, explains, “Shinnyo-en teaches that everyone has the opportunity for enlightenment in this life and that it can be achieved through practice, but that practice comes not only from a meditative experience like sesshin but also from acting in every­day society.” This teaching is apparent in the emphasis that Shinnyo-en places on social awareness and outreach. Their philanthropic activities have included giving scholarships to underprivileged students around the world, construct­ing schools in developing countries, and providing help in the wake of natural disasters, such as building a mosque for a community in Pakistan that was rav­aged by an earthquake.

In 1994, the Shinnyo-en Foundation was established to support educational programs encouraging young people to engage in acts of service. Service, from the point of view of the foundation, is not defined simply as volunteerism or activism but rather as any action that is “other-centered,” be it washing dishes for a family member or visiting a sick friend in hospital. The key is that service is a combination of the external actions we take in the world and the internal motivations that drive our actions. As Shinso Ito explains, “The future of Shin­nyo-en lies in helping build a world in which everyone can find happiness.”