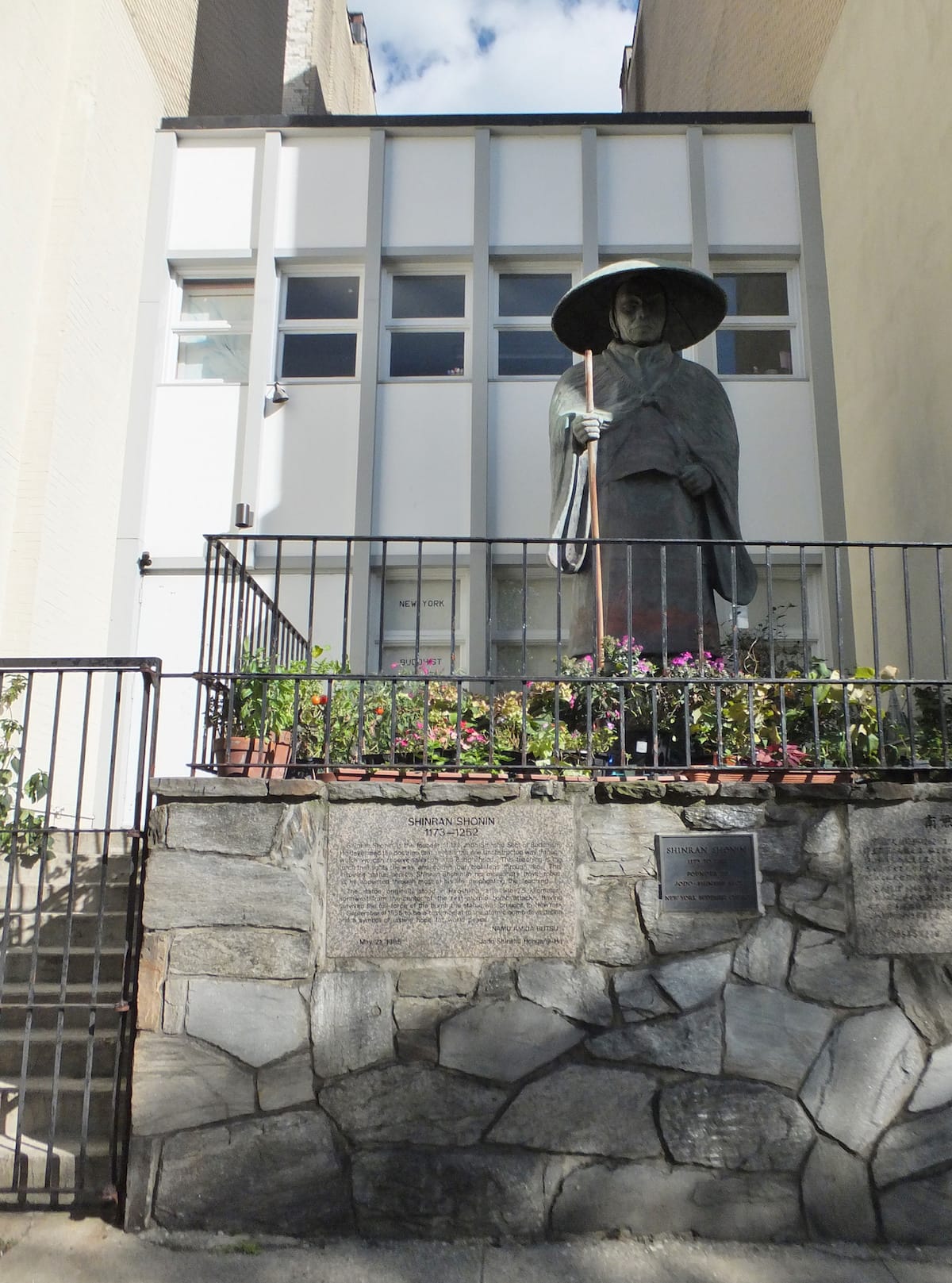 The weathered bronze statue of Shinran Shonin, the thirteenth-century Japanese religious reformer, gazes watchfully across Riverside Drive toward the Hudson River, greeting visitors arriving for Sunday-morning services at Manhattan’s New York Buddhist Church. Taking their seats in rows of chairs, they will spend the next hour chanting together in Japanese, singing Western-style hymns in English accompanied by piano or organ, listening to a dharma talk, and lining up to offer a pinch of powdered incense at the altar.

This easy blend of Eastern and Western influences has long typified Jodo Shinshu Buddhism in America, says assistant minister Matthew Wise. He explains that when Japanese immigrants arrived in North America in the late nineteenth century, “they wanted to assimilate—they didn’t want to stand out.”

Many Western adherents of meditation-based Zen may be surprised to learn that Jodo Shinshu, a branch of the Pure Land school, is the most widespread Buddhist sect in Japan. It’s a community-based, lay-oriented tradition that centers around the simple recitation of the Nembutsu: Namu Amida Butsu.

Many of the Japanese who emigrated to Hawaii and the West Coast were Jodo Shinshu followers. The scattered congregations they established eventually coalesced into the Buddhist Churches of America. Today, the organization has more than sixty independent temples and some 16,000 members in the mainland U.S. A separate organization, Honpa Hongwanji Mission of Hawaii, has thirty-seven member temples in that state, while the Jodo Shinshu Buddhist Temples of Canada serves members north of the border. All three organizations are affiliated with Nishi Hongwanji, the Jodo Shinshu home temple in Kyoto.

A former Buddhist monk, Shinran (1173–1263) taught that the pursuit of enlightenment is a futile, ego-driven exercise, and that thanks to tariki, or “other power,” we come to understand that we are already enlightened. “We should chant the Nembutsu out of gratitude,” says Wise. “We don’t have to click our heels together three times to realize that we’re home. We’re home and we’re grateful.”

This kind of abiding, optimistic faith is evident in the origins of the New York Buddhist Church. The Japanese-born founder, Rev. Hozen Seki, the son of a Jodo Shinshu minister, had plans to become a missionary in Taiwan when he learned of an opening with a congregation in California and took that instead. He served at a temple in Los Angeles and founded another in Phoenix, Arizona, but decided to start a temple in New York after reading that a Zen teacher, Sokei-An Shigetsu Sasaki, had a sangha there. Rev. Seki made the cross-country trip in spectacular fashion, flying in an open-cockpit plane with a Japanese pilot and navigator, making frequent stops to refuel.

Members of the Japanese community bought a building for $10,000 on West 94th Street and started holding services in 1938, even as relations between Japan and the U.S. were reaching the breaking point. During the Second World War, the church remained open, but Rev. Seki was sent to an internment camp. He returned after the war ended, and the congregation soon saw its greatest period of growth and prosperity, adding a Sunday school, a Japanese school, and other activities.

In 1951, Rev. Seki established the American Buddhist Academy. “He felt that there were a lot of people who would be interested in learning about Buddhism but were not particularly interested in becoming part of the Buddhist church,” says his daughter, Hoshina Seki. “My father was a very progressive thinker.”

The academy bought a five-story townhouse on Riverside Drive between 105th and 106th Streets that had once belonged to heiress Marion Davies, the longtime mistress of William Randolph Hearst. In 1955, Japanese businessman Seiichi Hirose donated the statue of Shinran Shonin, which had stood in a park in Hiroshima, a little over a mile from where the atomic bomb was dropped. “His wish,” says Hoshina Seki, “was that there be no more Hiroshima.” Zen scholar D.T. Suzuki, who was a frequent visitor in those days, spoke at the statue’s dedication ceremony.

In the early 1960s, the church moved into a newly constructed annex in the garden next to the townhouse. Rev. Seki retired in the 1980s and passed away in 1991. “I think he was very pleased at the teaching spreading,” says Hoshina Seki. “But I think he was also saddened that compared to all the other Buddhist religions, Shin Buddhism seemed to be the slowest to be understood and to catch up.”

Hoshina Seki believes Shin Buddhism in America is less attractive to Westerners than Zen because it is so straightforward. “It doesn’t have that exotic Asian flair or mystery,” she says. “As a Shin Buddhist, it’s simple. We rely on Amida Buddha and say the sacred name—and that’s it.”

Nancy Okada, whose parents helped found the temple and worked to keep it open when Rev. Seki was interned, says when first-time visitors arrive at the church, they bring expectations rooted in the religious traditions in which they were raised, particularly when it comes to reciting the Nembutsu. “Some of them take it as a mantra. It’s not a mantra,” she says. “Some of them take it as a prayer. They try to put everything into little brackets so it fits their way of understanding.”

Newcomers with preconceived ideas about Buddhism may be taken aback by hymns reminiscent of Christian worship. “They say, ‘This is not what I expected,’” explains Okada. “I tell them, ‘No, what you’re looking at is Americanized Jodo-Shinshu.’ This came from the missionaries who decided to absorb what they thought a Judeo-Christian service looked like to make it familiar to the population.”

The interplay of Japanese and Westernized forms continues even as the New York Buddhist Church has become home to a racially and ethnically diverse cross-section of New Yorkers. That would have suited Rev. Hozen Seki, who in the 1970s ordained three Caucasians, incurring the wrath of the Japanese Jodo Shinshu hierarchy. “He was a maverick, a renegade in his own way,” Okada says.

He would have been gratified to know that after seventy-five years, the congregation he founded still embodies that maverick spirit.