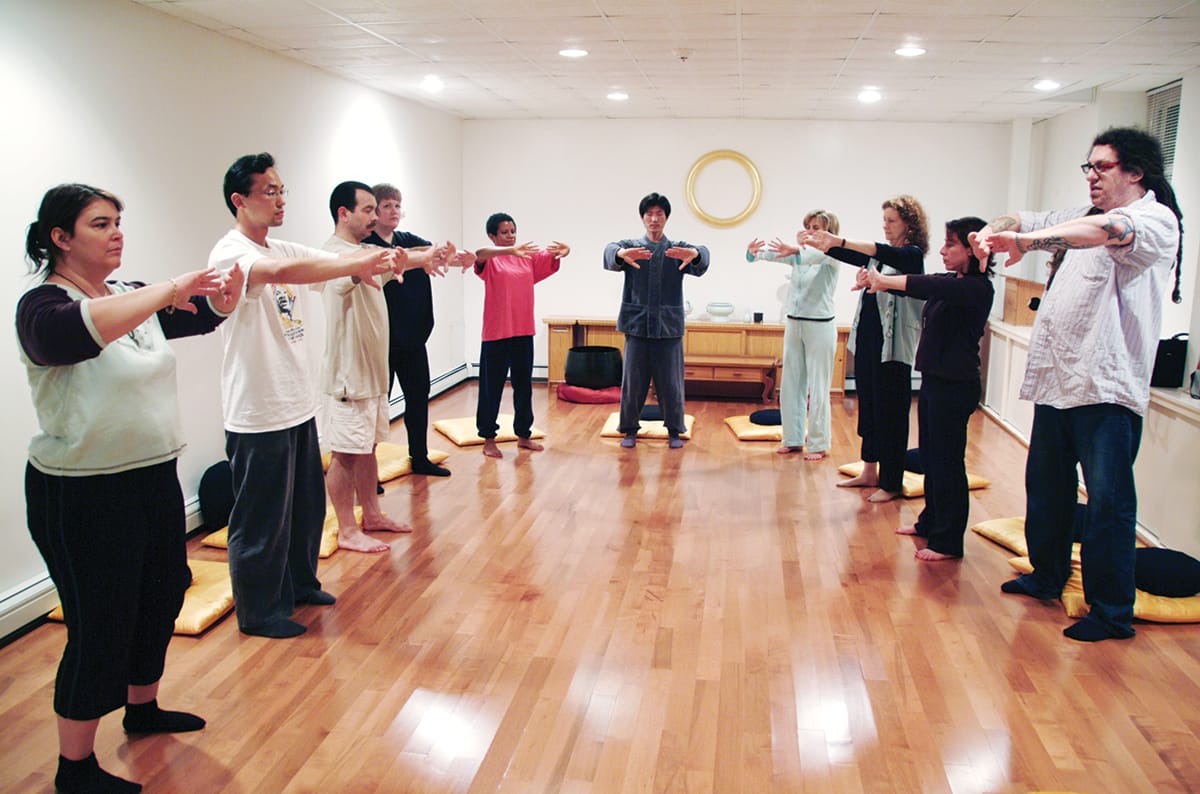 In a stately converted bank in Glenside, Pennsylvania, there are classrooms and chalkboards and a library with students reading at desks. In that sense, “It looks like a workaday educational institute,” says associate professor Glenn Wallis. “But then there are things that give you the signal there’s something else going on here.” Things like Buddhist art and artifacts, meditation cushions, the scent of incense, and the sound of bells ringing.

This is the Won Institute, a small but vibrant academic institution that offers three graduate programs: applied meditation, acupuncture, and Won Buddhist studies. The inspiration for this school came from the third head of Won Buddhism, who envisioned the order establishing meditation institutes around the world.

Won Buddhism was founded by the Korean teacher Sotaesan (1891–1943). At age ten, he was sent to a Confucian school, where he made daily visits to a mountain to pray and offer fruit to a spirit said to reside there. Sotaesan never saw the spirit, and in 1906 started searching for a teacher—testing beg­gars, strangers, and supposed sages. Five years later he stopped looking and dedicated himself to meditation and ascetic practice. His students say that the strict regimen eventually caused him to fall ill, but one day in 1916 he felt suddenly refreshed. On that day, accord­ing to Won tradition, Sotaesan attained enlightenment, and when he overheard neighbors discussing a complex spiritual text, he immediately understood it.

He then undertook an intensive study of various religions, and decided to form a Buddhist order that incorporated ele­ments of Daoism and Confucianism. Gender equality was important to him, as was respecting the perspectives of both lay and clergy. Following Sotaesan’s teachings, the order’s decision-making body, the Supreme Council, has nine women and nine men, and an equal number of clergy and lay. Women have flourished in this progressive environ­ment, and today a female minister, Rev. Kyung-Ko Pack, is the head of Won Buddhism in North America.

Bokin Kim, also a female minister, was instrumental in getting the Won Institute off the ground. She moved from Korea to the U.S. in 1979 with the inten­tion of teaching Buddhism. But after arriving, she realized that she needed to work on her English first. She also real­ized that other Korean Won Buddhist ministers would be in the same predica­ment. She says, “If we are not trained in the language, we cannot teach in the West—only first-generation Koreans can be our target audience. We cannot even really teach the second generation.”

Kim advocated establishing a Won studies master’s program in the U.S., and the Supreme Council accepted her pro­posal. Now Korean students who want to be Won ministers in the West do their undergraduate degree in Won Buddhist studies in Korea and their master’s at the Won Institute in Pennsylvania. This gives them two years to study and live immersed in English before becoming ministers.

Since the institute opened in 2002, Western students also have become involved with the Won program, and Kim hopes that eventually most of its students will be from the West. Steps have been taken to make the program more accessible to those whose native tongue is English, and if a Westerner wants to be a Won minister, it’s no lon­ger necessary for them to do a bachelor’s degree in Korea. Instead, they now can do a one-year preparatory program at the Won Institute before completing the master’s program.

Although the institute’s original rai­son d’être was to train new ministers, Kim and her team expanded their vision because a school must offer at least two programs to get accredited in America as a college that grants master’s degrees. After a couple of unsuccessful ideas, the team settled on applied meditation studies as the institute’s second program and received accreditation from the Pennsylvania department of education.

Wallis, who teaches applied medita­tion, says most students in his program are American professionals, tending toward middle age. “Many work in psy­cho-social services—they’re counselors, social workers, therapists, psychologists. We’ve had students in education adminis­tration, bereavement counseling, even the corporate world. These are people who have come to the conclusion that they could incorporate meditation into their profession and enhance their work.”

However, the applied meditation program also has attracted younger stu­dents straight out of college. To students in this demographic, Wallis says, “You can’t hang your shingle as an applied meditation expert. You have to comple­ment it with something to earn your living.” The Won Institute helps stu­dents find ways to do something mean­ingful yet practical with the program, and often this means helping students develop entrepreneurial skills.

“A big part of what applied medita­tion is,” Wallis says, “is finding a way to deliver material that’s appropriate to the audience—learning how to translate the material into specific environments. We train students in ways to help them figure out how to do that, and students have been very creative with what they’ve done.”

In 2005, the institute started its acu­puncture program, where students also receive entrepreneurial training. “In the acupuncture program,” says Wallis, “some people are more interested in evidence-based science. Then there are other people who are critical of Western science.”

In the other programs, too, Won stu­dents and faculty have “different ideas about what an institute of higher educa­tion should look like,” he says. “When you read a Buddhist sutta, for example, do you read it critically and question it? Or do you read it as a source of teaching and truth? The Won Institute is a mix of the secular and religious, and what makes a place of learning interesting is different views.”

“We’re a diverse school,” says Colleen O’Connell, the director of institutional advancement and planning. But regard­less of the direction a student is headed in, be it spiritual or secular, the Won Institute firmly believes in cultivating meditation practice.

“All students,” O’Connell says, “no matter which program they’re enrolled in, are required to take meditation courses.”

A major tenet of Won Buddhism, Wallis notes, is that “the technological and material side of society advances rapidly, but meditation serves as a coun­terbalance,” allowing people to “culti­vate simplicity.”