It’s the ultimate reality we all share. Why not get together and talk about it over a cup of coffee? John DeMont on death cafés. 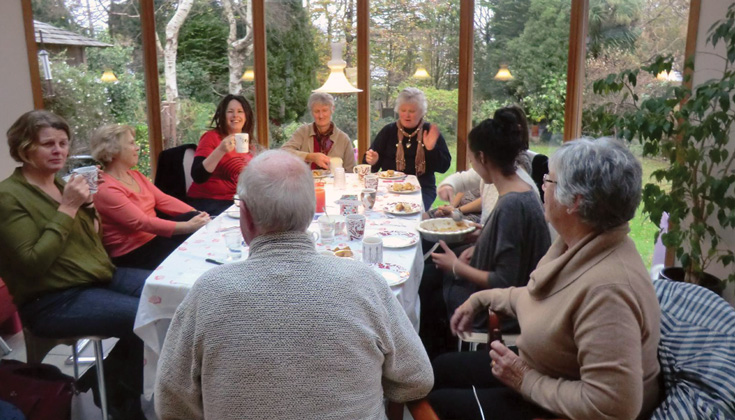 They come because the philosophical notion of mortality intrigues them. Or because they are death doulas, end of life therapists, palliative care nurses, or someone else who works with the dying.

Maybe they’ve got a loved one who is sick. Perhaps they, themselves, suffer from a terminal disease. Maybe, as long as they can remember, they’ve been haunted by death’s terrifying void.

“There are really too many reasons to count,” Caroline Dent says about why people attend the death cafe she runs in North London’s Finsbury Park.

But come they do for the chance to face death’s questions—in small Canadian towns and big American cities, on the western-most tip of New Zealand and the north coast of Crete, in the sweltering heat of Senegal and Iceland’s twenty-four-hour-a-day darkness.

Attending a death cafe can be illuminating as well as cathartic.

Since 2011, nearly 5,000 death cafes—self-directed sessions where attendees discuss the finality of death, why we all fear it, and how to live while awaiting it— have been held in fifty-one countries. That’s a startling turn of events for a subject that used to be taboo in much of the world.

“We had pushed it to the sidelines,” said the late Jon Underwood, creator of the worldwide death cafe movement. “We had taken real death and outsourced it to the professionals.”

Instead of hiding death and leaving it to the priests and funeral home directors, death cafes normalize mortality. They are also, pardon the pun, “living” proof of Judy Lief’s contention that the closer we are to death the less we fear it—and that death can be one of our greatest teachers.

In some ways, attend one death cafe and you’ve attended them all: They are strictly non-profit. What is said at death cafe stays at death cafe. There is always food and drink to ease the mood.

The format also tends to be similar. The leaders welcome everyone and explain the etiquette, before breaking the attendees into small groups for discussion of death. At the end, everyone reconvenes and shares the gist of their conversation with the rest of the room.

Attendees are warned beforehand that a cafe is not a bereavement counselling session. Nor is it a place where basic information about dying—how, say, to get your financial affairs in order before you depart—is supplied.

Instead, when the conversation flows, pretty much anything death-related goes. Suicide? Near-death experiences? Funeral rites? Are you emotionally prepared for your own death? What are your deathly fears and uncertainties?

The nature of the discussions, naturally, reflects the people in the room. Although aging baby boomers make up a majority at many cafes, teenagers sometimes take part, as do folks in their eighties.

More women, generally speaking, attend than men, perhaps because they are so often the caregivers when a family member is ill. Christians show up, as do Jews, Muslims, Sikhs, Hindus, pagans, atheists, and of course Buddhists, for whom awareness of death is a central practice.

In Jon Underwood’s obituary, the New York Times wrote that his Buddhism allowed him to draw “on the concept of ‘impermanence’ (anicca in Buddhism), the idea that nothing is for ever, that everything is subject to alteration and that change is the only certainty.”

The acceptance of death that brings most people to a death cafe can be liberating, even joyful, says Deborah Luscomb, a Buddhist who runs a death cafe in Halifax, Nova Scotia. “They’re far from morbid,” she says of the gatherings. “There is always more laughter than tears.”

Attending a death cafe can be illuminating as well as cathartic. Discussing this subject that dwarfs all others, people explore how to carry on while knowing that death awaits them. Hopefully, Jon Underwood said, we discover something else—how to “make the most of our finite lives.”