Musician East Forest’s collaborative album with the late spiritual teacher Ram Dass encompasses his lifetime of wisdom in 14 tracks, bringing his teachings to life after death. 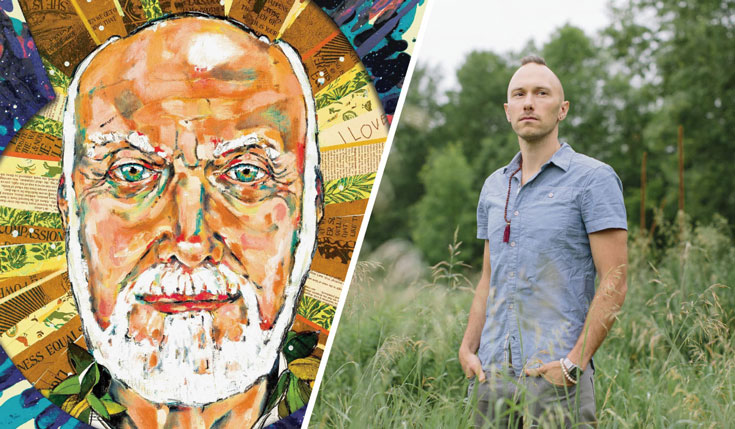 In 2018, musician East Forest found himself in Maui, Hawaii, sitting in the upstairs study of spiritual teacher Ram Dass’s home — just the two of them sat in the room with microphones set to record.

“I realized that I’d made my way into what felt like the spiritual White House, and that it was no small feat,” he says.

As East Forest hit record, Ram Dass stared at him, awaiting a question. East Forest asked him about nature, and how we might use it to connect to ourselves in the high speed, hyper-digitized world we live in.

Ram Dass paused, and thought for a while, staring out to the ocean and thumbing through his mala beads.

“When I heard the poetry, perfection, and mastery of what he was saying, I was totally blown away,” says East Forest. “And then we were off to the races.” 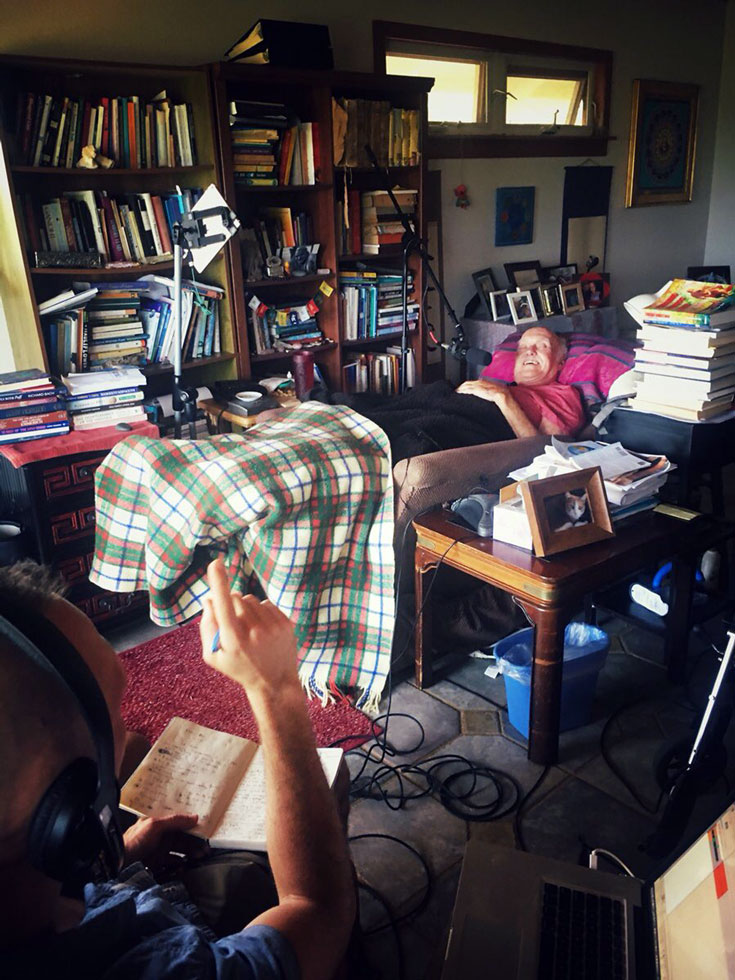 East Forest and Ram Dass recording at his home in Maui.

East Forest, an artist whose electro-acoustic music aims to bridge the digital and natural worlds, travelled to Maui in the summer of 2018 to record the collaborative album with Ram Dass, the beloved spiritual teacher and psychologist. The final four-chapter album, Ram Dass, released in full in August 2019, consists of 14 tracks encompassing the spiritual teacher’s lifetime of wisdom on timely topics, including our relationship to the natural world, dark thoughts, psychedelics, his travels to India, and, ultimately, death. Each track is set to East Forest’s music, which he composed to align with the emotion of the teachings.

East Forest says Ram Dass had been his “teacher from afar” for many years through books and pre-recorded talks, inspiring him with his “charismatic and humorous” personality and intellectual background in psychology.

On the 11th track of the album, “Like Taking Off an Old Shoe AKA Death,” Ram Dass speaks of the transformative quality of death:

“I think there was always a part of him that he was speaking about his himself and his near future too,” says East Forest.

East Forest originally set out to create a collaborative album with 13 spiritual teachers, but at the suggestion of his manager, decided to focus solely on Ram Dass. Born Richard Alpert, Ram Dass was a former Harvard professor and psychedelic researcher and pioneer who was known as a devotee of Eastern religion and the Hindu spiritual teacher Neem Karoli Baba. East Forest had been drawn to Ram Dass ever since he first read Ram Dass’s classic book Be Here Now. He pitched the idea of a collaborative album to Raghu Markus at Ram Dass’s Love Serve Remember Foundation, hoping to translate his teachings to new audiences through music.

His work was the way he lived his life. We can all live our lives in loving awareness.

Initially, East Forest was meant to work with prerecorded teachings from Ram Dass, but — as an artist who works exclusively with field recordings he makes himself — he wanted the “alchemy and magic” of original sound instead of archived recordings.

Having suffered a stroke in 1997, Ram Dass was left with aphasia, a condition that impairs one’s ability to formulate language, making it challenging to connect the words in his mind to speech. As a result, he spoke very slowly and with long pauses, but with careful editing and the high-quality condenser microphone East Forest used, Ram Dass’s voice, laughter, and teachings come to life with extreme clarity on the album.

“The technology of recording him and putting it to music was so perfect because he could suddenly become alive,” says East Forest. “He was locked behind this aphasia, but when he’s inside of the music and the pauses aren’t there anymore, and the music amplifies the emotional weight of what he’s saying, all of a sudden he blooms back into life.” 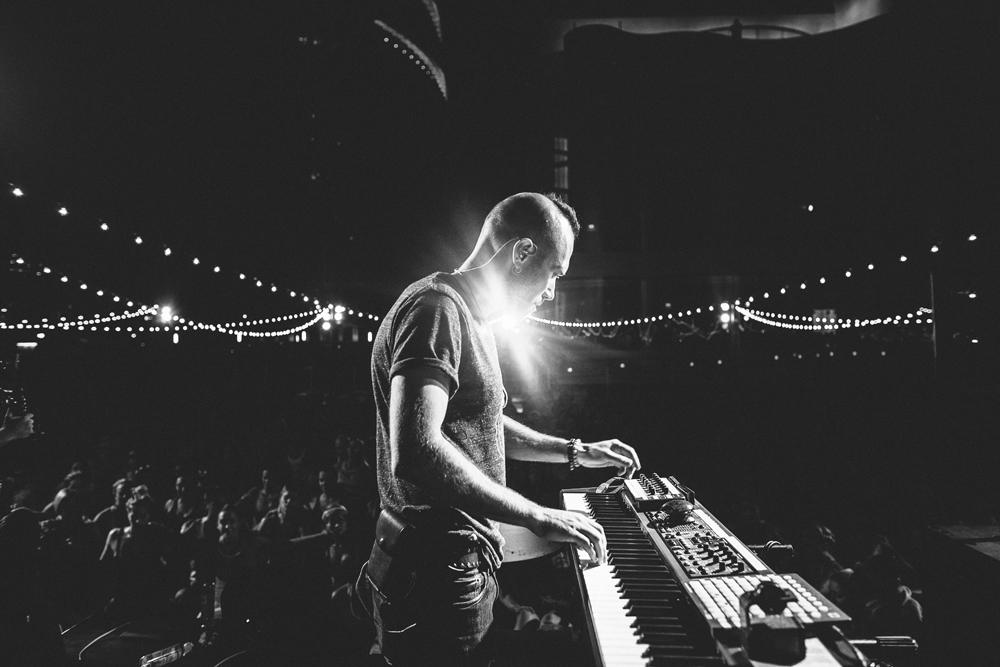 During their time together, Ram Dass also gave East Forest, whose real name is Trevor Oswalt, the spiritual name Krishna, which he’s adopted in his personal life.

“When you change your first name, you’re adopting another sound as your name, and it drops the baggage you’ve been carrying with your other name. All of a sudden you have this new opportunity to be something different,” he says.

“I was just going there to try to make this record and serve whatever he’s been doing. I never thought I’d walk away transforming my sense of self on a personal level.”

After recording the teachings, East Forest returned to his Utah studio where he composed the soundtrack to support each songs’ subject and its unique emotional quality, approaching each micro-teaching like a film score. East Forest himself has been the leader of underground “sound healing” ceremonies for the last decade, and combines a number of instruments and musical styles to create his electro-acoustic sound, many of which you’ll hear throughout the album. Ram Dass also features the voices of guest artists including Trevor Hall, Stic of Dead Prez, and Krishna Das. A selection of reworked tracks from the album were scheduled to be released within days of Ram Dass’s death.

The last time East Forest saw Ram Dass was at his December 2019 retreat in Maui just weeks before his death on December 22. Though he had begun speaking less and less, “he was still this beautiful presence,” he says.

In the wake of Ram Dass’s death, East Forest says he’s still trying to understand what the project means to him. Though he’s grieving the loss of the spiritual teacher, he says he feels a great amount of “gratitude and humbleness” when he thinks about his role in the project. Going forward, he hopes to continue to bring the album to new, younger audiences who could benefit from his timeless teachings and example.

“His work was the way he lived his life. We can all live our lives in loving awareness, truth, and compassion. He was just mirroring that back to us in a very beautiful, pure, and inspiring way.”

I am loving awareness