Sometimes we think irrational things while the truth is right in front of us. When that happens, says Jeremy Mohler, four simple words can help bring us back to earth. 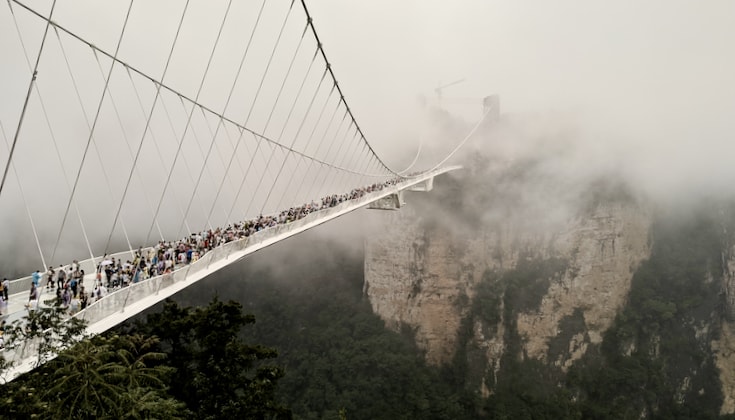 A glass footbridge in in China. Photo by Zhidong Cao.

Once, while riding in a van in the Dominican Republic, I was blindsided by an emotion that quickly turned to shame.

I had been feeling the familiar anxiety of traveling abroad. I was on my way to a new friend’s wedding at an all-inclusive resort. I don’t speak Spanish, and I had little bearings on the geography.

As the van’s young driver darted between scooters and horses along crumbling rural roads, I noticed my shoulders tighten and questions flood through my mind. What do I do if we crash? Why are there only men on the roads? Where are all the women? Why isn’t my cellphone working?

But, then, I spotted a familiar red, white, and blue. Among mahogany groves and sugar cane fields, an Exxon gas station sat open for business.

To my surprise, I wasn’t disgusted by the sight of an American petro company in a developing country. Instead, I was somehow comforted. For as long as I could keep my eyes on the station, I felt safer, less adrift in a choppy sea of unknowns.

The moment was a real-life demonstration of a phrase coined by Buddhist teacher Tsoknyi Rinpoche and popularized by meditation teacher Tara Brach: “real but not true.”

Tsoknyi Rinpoche often tells a story about crossing an extremely high bridge in Malaysia that was made of glass. He was so wracked with fear that his body locked up.

The comfort I felt in seeing Exxon was not necessarily true. Capitalism is a violent and chaotic political economic system, particularly for poor and working class communities, and especially in developing countries. And, an Exxon in Punta Cana couldn’t guarantee my safety any more than one in West Baltimore.

But the feeling was real — to me. As we passed the station, my shoulders relaxed and my mind stopped worrying.

“Real but not true” gives us space to both notice thoughts and emotions and acknowledge that they might not correspond with reality. It’s an antidote to our habit of trying to escape uncomfortable emotions. It alleviates the suffering that is caused by futile attempts to avoid what actually is.

“When we are suffering, we are believing something that is not true,” writes Brach.

Tsoknyi Rinpoche often tells a story about crossing an extremely high bridge in Malaysia that was made of glass. He was so wracked with fear that his body locked up and wouldn’t move. But then he realized that, though his fear was real — it was happening inside of him — it wasn’t true. Hundreds of people were crossing the bridge in front of him. He likely wasn’t going to die. But he still felt afraid — the thoughts and emotions he was experiencing were as real as the breeze on his skin.

“Not true means you’re not going to die,” he says. “But it’s really real that you feel it. So, I kindly sympathize with myself and be kind to myself: ‘I know you. You’ve got this symptom, but it’s not true. You will be okay. By really understanding your suffering [while acknowledging] it’s not true, you can make it. You can cross.'”

Meditation is a way to practice remembering this — that, most of the time, we do have options. It’s a training ground for “real but not true.” It gives us the space and time to relax into simply noticing our thoughts and emotions rather than trying to do something about them. It helps us recognize that the storylines that we attach to our emotions are just that, stories. But we also have room to accept that all of experience is still real.

As the Exxon faded in the van’s rear window, I quickly filled with shame. My mind pondered a different question: Why did I take comfort in an image of American capitalist imperialism, while the experience of traveling in a foreign country made me so uncomfortable?

But looking back, Tsoknyi Rinpoche’s phrase helps me see that my anxiety about travel and my comfort in something familiar were both real experiences. And that those experiences don’t necessarily reflect a truth that I was about to crash or that Exxon is a benevolent presence in developing countries.

“Real but not true” encourages us to hold both aspects in mind at the same time: how we feel, and what is true.

Jeremy Mohler is a political writer and meditation teacher based in Washington, D.C. He writes at jeremymohler.blog and produces a weekly podcast, Meditation for the 99%.