When a student confronts his famed teacher, Steve Silberman learns the meaning of “intimate practice.” In that moment, he becomes a Buddhist. 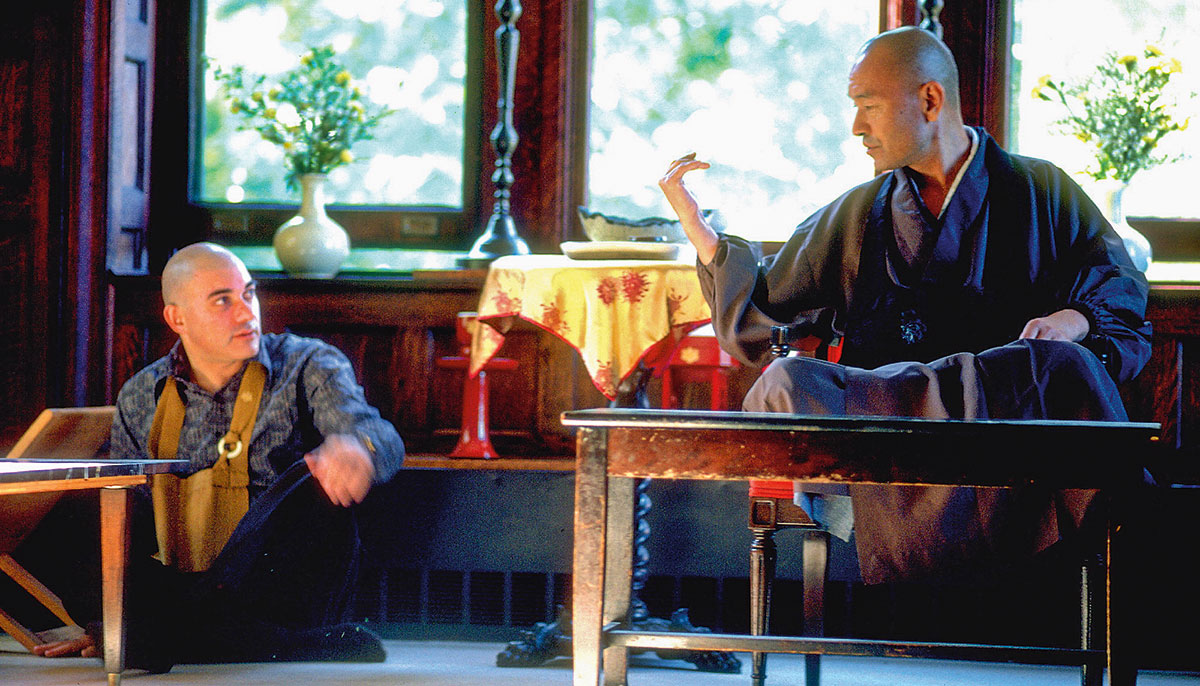 An exchange between Taizan Maezumi Roshi and his senior monk, Tetsugen Bernie Glassman. Later, as a roshi in his own right, Glassman would become an influential and innovative leader in American Buddhism. Photo by Peter Cunningham.

One day in 1977, in his “Literary History of the Beat Generation” class at Naropa Institute, Allen Ginsberg challenged his students with a question: “How many of you have signed up for meditation instruction yet?” Only about half of the scruffy aspiring poets in the room shyly lifted their hands. “Aw, you’re all amateurs in a professional universe,” he groaned.

As a scruffy nineteen-year-old poet myself, I’d come to Boulder that summer mainly to study literature with my Beat heroes, not to study Buddhism. But Ginsberg’s question embarrassed me into signing up to learn how to meditate. I didn’t want to be an “amateur” anything.

There were at least two paths for beginning meditators to take that summer at Naropa Institute (now University). Most chose to get instruction in basic mindfulness/awareness practice from a senior student of Naropa’s founder, Chögyam Trungpa Rinpoche. They were the guys (and they were mostly guys) in suits and ties. They looked like brash young CEOs when most of my peers were still shambling around in T-shirts and jeans.

Wait — that was it? Enlightenment was that simple?

Alternately, you could get zazen instruction from the monks visiting from the Zen Center of Los Angeles with their teacher, Taizan Maezumi Roshi. It was the summer of the first Star Wars movie, and Maezumi Roshi—wiry, shaven-headed, and handsome in his robes—looked like a young Jedi. I chose the latter path, which didn’t have a waiting list.

Only a handful of students showed up for the morning session, but I was impressed to see that Roshi himself would be teaching us to sit. He showed us to take the proper lotus or half-lotus position on the cushion, keeping “soft eyes” on the floor in front of us, straightening but not stiffening our spines (I can still feel Roshi’s hand pressing on my back, gentle but insistent), and counting our breaths from one to ten, starting with the first outbreath. He told us that when we caught ourselves daydreaming, we should just bring the mind back to the breath to start again at one.

Wait—that was it? Enlightenment was that simple? (The practice of breath-counting in zazen turned out to be so simple, and yet so inexhaustible, that I’ve kept doing it almost every day for more than forty years.) I wanted more. Where was the lightning flash of satori, the dropping off of body and mind, the “mosquito attacking an iron bowl” I’d read about in Philip Kapleau’s The Three Pillars of Zen? Maybe that came later.

Curious to go deeper, I signed up for Roshi’s course in Dogen Zenji’s “Genjokoan,” the title of an essay written for a lay practitioner that can be translated as “Manifesting the Heart of the Matter.” Now we’re talking! Calling it a course was stretching it a bit, because there was no syllabus, no tests or quizzes, and no bonus projects for extra credit. Instead there was Roshi, sitting in his robes in the hot and crowded gymnasium that Naropa rented for the summer, plucking out phrases from the 750-year-old text and saying whatever came into his mind.

It was certainly not the standard, scholarly explication of a classic text. Perhaps the best description of Roshi’s teaching style was written by former student Andrew Cooper for Tricycle:

“Roshi’s particular genius as a teacher was a matter of subtle appreciation. He might take a phrase from a koan or a passage from Dogen—or just one character from one of those—and work it up and down, backward and forward, and maybe, at some point, you’d feel like something had cracked open and now glowed. You’d feel as if, alongside him, you’d touched upon the world the text carried and, alongside him, had been touched by the line of Zen folk that stood behind him.”

One by one, hands shot up. “Intimate practice is when there is no division between the teacher and the student,” said one young man. It sounded good, but what did I know? Roshi, however, made a sound like a disgruntled cat. He was clearly looking for something else. Next?

“Intimate practice is when sitting is just sitting.”

That sounded good too, but Roshi made another “no” sound. This was clearly going to be trickier than I thought.

That sounded really Zen. But Roshi frowned again. What was going on? I felt like I was observing a game being played with very high stakes, though I didn’t yet understand the rules, which seemed to resist rational analysis in a way I’d never been exposed to before. I had to figure it out.

Meanwhile, the tension was becoming unbearable. Just then, Roshi’s senior monk, Tetsugen Bernie Glassman—a burly guy with astonishingly thick eyebrows—unexpectedly spoke up from behind him. “Roshi, you are very drunk,” he said, “and when you get drunk, I get angry.”

What was this? Though I was still figuring out the rules of this game, Bernie’s statement seemed to break them. Or did it? Was Roshi drunk? I was quickly learning that drunken Buddhist teachers were hardly rare at Naropa, as were their student’s rationalizations for their drinking. The apprehension in the room verged on spilling over into chaos.

But Roshi remained implacable and plowed on.

Finally, a young man at the back of the room burst into tears. “Roshi!” he cried out. “My mother is very sick. The doctors think she has cancer. In the morning they will have to operate!”

The room was stunned into silence.

Then he added softly, “That is intimate practice.”

I still didn’t know quite what had happened, but the whole exchange stuck in my mind, like an iron bowl that my mosquito brain could not penetrate.

That was the moment I became a Buddhist.

But then things changed abruptly. In 1983, with great remorse, Roshi admitted to the ZCLA sangha that he was an alcoholic and sought treatment at the Scripps Memorial Hospital in La Jolla. At nearly the same time, the rumors that Roshi—who was married—had been having affairs with female students, including one of his dharma successors, proved true, further roiling the community. Maezumi’s wife and children moved away, as did many of his students. To make ends meet, ZCLA was forced to sell off some of its properties. Some days, Roshi found himself giving dharma talks to a nearly empty zendo.

Many senior monks set off on their own to start their own successful sanghas. Bernie, now known as Roshi Glassman, launched the Greyston Mandala in Yonkers, New York, and founded the Zen Peacemaker Order, which held “Street Retreats” in cities around the world and “Bearing Witness” retreats in places such as the Auschwitz–Birkenau concentration camp. He took up clowning, christening himself Bernie the Boobysattva. But he was still teaching Zen in his own way, as Maezumi Roshi—who had been sober for many years by that point—confirmed in 1995, when he wrote a poem declaring his intention to confer upon Bernie the ultimate recognition of deep insight, known as inka.

Shortly after composing the poem, Roshi boarded a train for Tokyo after spending the day with his mother. He apparently fell asleep, missed his station, and arrived very late at his brother Junpo’s temple, where he was planning to spend the night. Heavy drinking is as much an accepted part of the social order in Japan as it was at Naropa, and Roshi may have felt like it would have been awkward to decline to drink with his brother. Afterward, he announced that he was going to take a bath, and the following morning, Junpo found him drowned in the tub. The true cause of his death was kept secret from his children and the ZCLA sangha for months.

As it turned out, Maezumi Roshi was very sick that night at Naropa. He was also a very powerful teacher, to whom I still feel profoundly grateful. But the night I became a Buddhist in 1977, only Bernie was bold enough to step outside the rules of the game, speak the truth bluntly, and “operate” on his teacher.