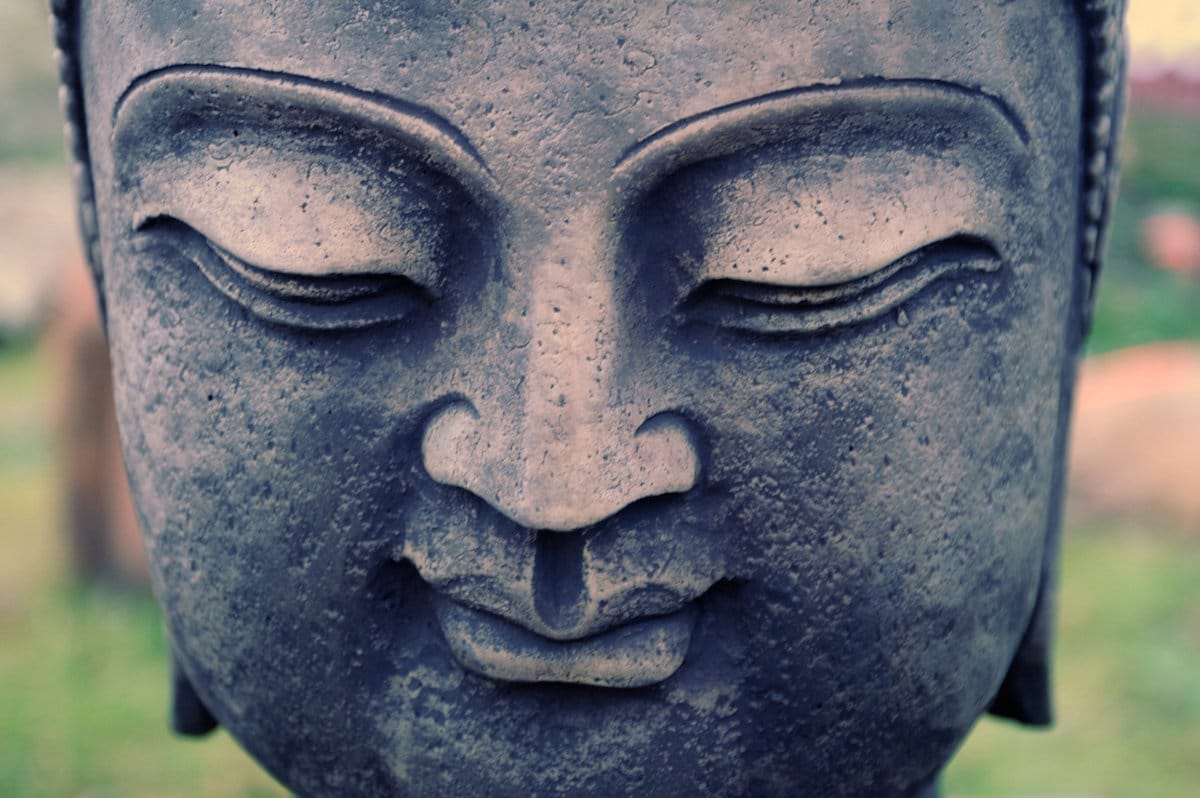 Seven wise sisters planned a spring journey. One of them said, “Sisters, instead of going to a park to enjoy the spring flowers, let’s go together to see the charnel grounds.”

The others said, “That place is full of decaying corpses. What is such a place good for?”

When they arrived, one of them pointed to a corpse and said, “There is a person’s body. Where has the person gone?”

“What?!” another said. “What did you say?” And all seven sisters were immediately enlightened.

Indra, Lord of the Gods, was moved by their awakening and showered flowers down onto them. He offered them whatever they needed for the rest of their lives. One of the sisters replied, “We have everything we need. But please give us a tree without roots, some land without light or shade, and a mountain valley where a shout does not echo.”

“Ask anything else, holy ladies,” replied Indra, “and I will gladly provide it. But I don’t have those things to give you.”

“If you don’t have them,” said the woman, “how can you help others liberate themselves?” At this, Indra took the sisters to visit the Buddha. When the Buddha learned why they had come, he said, “As far as that’s concerned, Indra, none of the arahants has the slightest clue either. Only great bodhisattvas understand this matter.”

There is much to love and study in this story and many ways to appreciate it. But I don’t want to overlook the simple picture: a group of women freely discerning how best to use their time and taking some time to be alone together. So one of the first teachings here is the quiet reminder that women may need some time to walk with one another as these women do, literally, “amid the burning.”

It is much harder to maintain the walk of awareness without other women. Receiving the legacy of our grandmothers and mothers helps us. So does knowing that our sisters are beside us and recognizing that we are here to make a better world for our daughters and granddaughters.

But the story of the wise women also reminds us that facing what needs to be faced—walking toward the charnel grounds—can strike us as basically unpleasant. Aren’t there always sweeter ways to spend a day, if one has the option, than in the contemplation of death and impermanence?

But the lead woman cuts through: “Sisters, just go. Very good things are there.” As we take the step off the edge, here is a reminder to trust the perfect air. Our wise woman gently turns aversion on its head; the place where release from the suffering of decay will be realized might just be exactly where we least expect to find it.

The women make the journey we all make to face mortality. Arriving at the charnel grounds, they awaken. But they look at the sky, and it rains flowers. One of them asks, “Who praises us and showers us with flowers?” Indra, the god of the Earth, answers that it is he who is celebrating the women’s awakening, and he asks for the honor of taking care of all their needs for the rest of their lives.

In order to connect with the depth of the story here, and the gorgeous turning that’s about to happen, we have to connect with what is realized amid all the decaying corpses. What state of mind requires no support? What empowers the woman to say to this god that she already has everything he has to give her?

We can say that the women in that charnel ground were whole and perfect, but that had been true before they went on their walk. What changed? When they saw the corpses, when their minds settled, they became, in a sense, beings who were no longer turning from pain or mystery. When that occurs, what becomes available? Something invulnerable—and inarguable.

Still, we need to be careful. What Indra offered is what many women do without every day. I recently came across the haunting citation that fully seventy-five percent of the world’s poor are women. That single, bald percentage shook awake something that’s hard to put to rest: the matter of who eats and who goes hungry, of who has a roof and who goes unsheltered, of who is cared for and who is abandoned when ill or aged.

It is likely that the wise woman who talked back to Indra was not poor by worldly standards, but still, it would not be easy to turn down such an offer. Nevertheless, from her awakened state, the wise woman was able to claim with confidence that they had everything they needed. And with that natural confidence, she was able to take the meeting to greater depth. She simply redrew the sky. She is not turning Indra away but standing in utter intimacy. And a subtle point, one that I often find hard in my life, is to realize that a caress of raining flowers—or some such sign—can’t be depended upon to affirm our every difficult choice. To the degree that I depend upon that, I look outside myself, losing myself and my voice.

To “talk back,” in this sense, is to live from the heart of the matter. It is to remember that we are the daughters of ancient springtime, of beginningless time. Finally, an answer to “What do women really want?” The tree without root, the valley without north or south, the shout without echo: each moment so full it has no measure, no boundary, no remainder. Then, as we reach for food, or ordination, or to take the lead when it is called for, we “stand alone between heaven and earth” (as the Buddha proclaimed after his birth)—and walk together.

Merle Kodo Boyd’s Reflections on Chiyono’s “No Water, No Moon.”