While belief can be just dogma or preconception, it can also be a guiding polestar that gives us a sense of direction. Elizabeth Mattis-Namgyl on the power of belief to move us out of a small, self-focused world and into a bigger way of being. 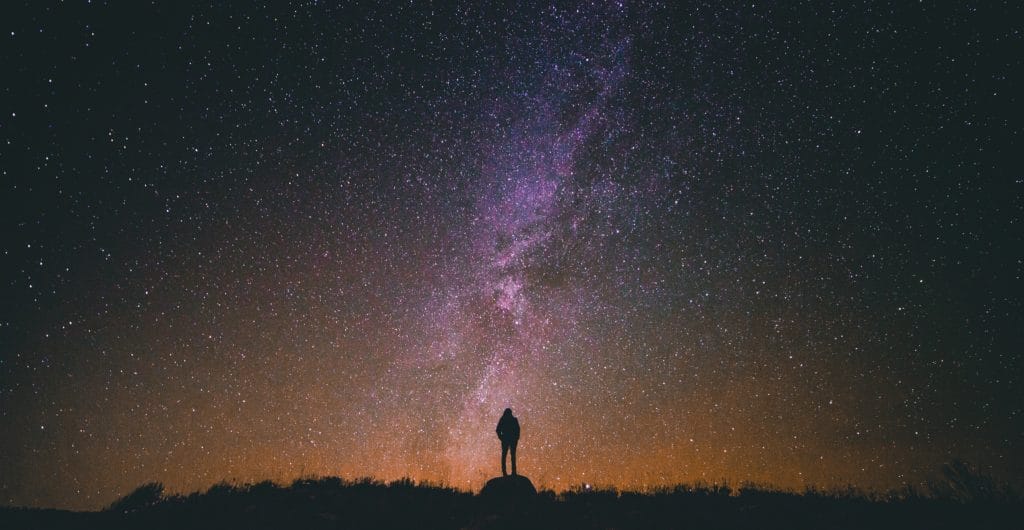 My friend Maryanne and I were riding our horses together across the high open desert of the San Luis Valley when she surprised me with a question: she asked if I believed in reincarnation. Since I’ve been a practicing Buddhist for over twenty-five years, it wasn’t the reincarnation part of the question that got me. It was the word “belief.”

To me, belief describes a static way of looking at things, different from the more open, inquisitive qualities of mind that I have come to appreciate through my years of practice. This is not to say I disbelieve in reincarnation. After all, we seem to enter this world with already-established dispositions. Why, for instance, did Bobby Fischer have a predilection for chess? Why do children raised under the same roof often have such different characters? Why do I always want to be around horses? Furthermore, I find it difficult to envision life, which is primarily an experience of awareness, as a strictly material process. In other words, it doesn’t seem like the mind begins and ends with this body.

And yes, the Buddha, whose teachings have deeply inspired me and opened up my life, did talk about his past lives. Yet as a Buddhist I never felt pushed to believe in reincarnation—to reach a solid conclusion. Instead, I have felt encouraged to stay open, to inquire. So when Maryanne asked her question, the word “belief ” seemed to undermine my understanding and experience of practice, which is investigative, lively, and interactive.

Whether something is true or not is very important to us. In the world of science, we continuously strive to discover new truths, and these new truths render old truths obsolete. That says something about how “true” they were in the first place. This is not to say that science doesn’t make some amazing and useful discoveries. It only suggests that we can and do function in the world, regardless of whether something is “true” or not.

We don’t need a sense of “rightness” to respond and be effective in life. In fact, how much does rightness serve us? How has it helped us in the realm of personal relationships, religious discourse, or politics? Even rightness in the name of altruism—or vegetarianism, or spirituality—can create aggression and divisiveness. When you think about it, belief and rightness seem extraneous to open inquiry, to responding to life in the most basic way.

Modern science acknowledges the limitations of holding on to static truths. As theoretical physicist F. David Peat says, “It is widely held that certainty about the real world is a failed historical enterprise.” That makes sense. Where does a static truth stand in a world that is dynamic, rambunctious, and open to interpretation?

I am not dismissing the value of belief altogether. In fact, the more I thought about Maryanne’s question, the more belief, as an experience, began to open up for me. I started to see that we use the word in many different ways.

For instance, a belief can be an idea with a strong sense of direction, a guiding polestar. When we say to someone, “I believe in you,” it doesn’t mean we see that person in a static way. It means we see the potential or goodness in someone and want to encourage her to move forward. I saw the movie Conviction recently, which is based on a true story. In the story a sister who had never graduated from high school took the GED exam and went on to finish law school in order to free her brother, whom she later proved innocent, from life imprisonment. Her devotion to her brother was deeply moving and driven by her conviction in his innocence—a belief.

If you look up “belief” in the dictionary you might be surprised by how many definitions it has: from dogma, opinion, and assumption, to love, cherish, or appreciate. There couldn’t be two more different experiences than dogma and love. Dogma is closed and exclusive while love is open and inclusive. So I started to look more deeply into the etymology of belief.

In her book, A Case for God, Karen Armstrong talks about the word’s origin. She says that, in the early translation of The New Testament, the word translated as belief came from the Greek word pistis, which means to love, hold dear, appreciate, or commit to. According to Armstrong, Jesus wasn’t asking his disciples to believe in his divinity; he was asking them to join him in his vision to serve. Here belief has nothing to do with conforming to an idea but serves as a vehicle to move us out of a small, self-focused world into a bigger way of being.

Sometimes we have experiences, which make us understand that life is much fuller than the ideas we have about it. We look up at the night sky and feel humbled by its beauty, grandness, and mystery. Yet we might also experience ourselves as part of this vastness, the great nature of interdependence. such experiences transport us beyond the limited constructs of “true” and “untrue” to a fuller way of knowing things. This way of knowing is basic to our humanness.

Not everyone is looking at life in terms of whether things are true or not. This is often apparent in indigenous cultures, in which belief expresses itself as a sense of wonder, respect, and appreciation for the mystery of life. In India, you may walk past a tree with an interesting knot in a branch. And you see that someone has already been there and offered a flower.

After hiking to a cave above seventeen thousand feet in Tibet, I met an old man there who had spent twenty years in prison during the Cultural Revolution. He was missing most of his fingers. He hadn’t received a formal education, much religious training, or instruction, but while in prison he prayed to Chenrezig, the bodhisattva of compassion. I couldn’t see a trace of aggression, blame, or “rightness” in this man—only a deep sense of humility, openness, and love. Clearly, belief for him was not a static idea but a way of accessing a bigger way of being.

Many of us have a tendency to dismiss what we can’t see personally as appealing only to superstitious or naïve minds. But that is because we are often looking through the lens of whether or not something is “true,” which reduces the fullness and mystery of life to an idea, a subjective conclusion. How “true” can that be?

Belief doesn’t necessarily have to concretize. It can be a feeling of inspiration from within, something we can learn from—an idea with a strong sense of direction. When I look at reincarnation in this way, I see that it has a powerful function in the way I understand and live my life. It helps me see beyond my idea of a singular and separate “I” that will, at some unknown point, fall into extinction. This brings me closer to the beauty, fullness, and mystery of life, something that’s truly beyond “me,” or the extinction of “me”—or even the reincarnation of “me.”

Elizabeth Mattis-Namgyel is a Vajrayana teacher and retreat master with Mangala Shri Bhuti, based in Crestone, Colorado. She is the author of The Power of an Open Question.