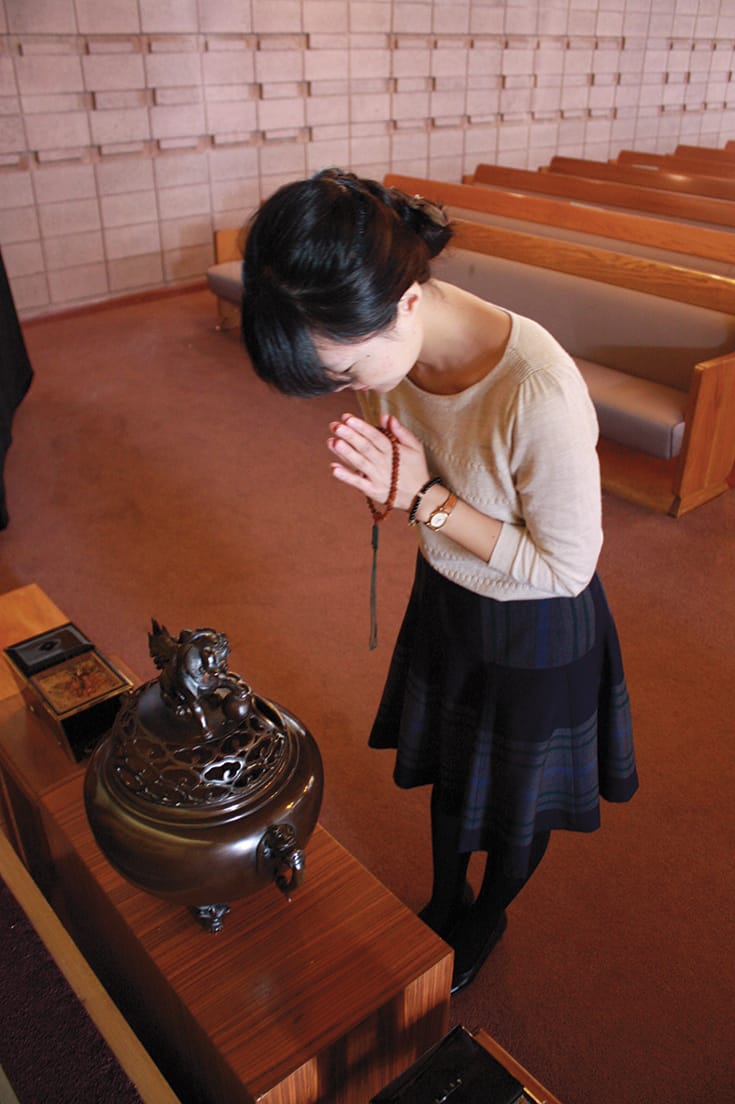 When we pray, says Mark Unno, it’s important not to get caught up in magical thinking or to become attached to specific outcomes. Just praying is enough.

The prayers for may or may not come to fruition. You might pray for a family member’s health to recover, or for the success of a fellow practitioner’s efforts at a particular stage of practice, or for yourself. Your family member may recover from illness, or she may not. The practitioner may attain the next stage of practice, or he may not. However, the prayer of the Buddha, be it Shakyamuni or Amida or some other expression of the ultimate oneness of the dharmakaya, is already fully present, unfailing.

Buddhist practice involves a transformation of one’s whole being; thus, it is sometimes referred to as a mind-body practice. When practiced communally, such as in a sesshin or dharma gathering, one’s own practice is supported by the mind-body energy of the entire group. There are palpable physical effects of practice that seem to be transferable from one person to another—from master to disciple, teacher to student, and within a group-practice setting—so it makes a certain amount of sense that the mind-body energy of such practice is also transferable through Buddhist prayer. This is the power of parinamana, or the transfer of the merit of practice from one being to another. However, whenever we pray for something or someone, there are potential pitfalls, namely attachment to specific outcomes and magical thinking. Ultimately, these are two sides of the same coin.

One can pray for something, but outcomes are always unpredictable. This doesn’t mean that prayer is useless, since the karmic power of true practice will inevitably come to fruition. But we can’t know what shape or form it will take. This is not unlike my work as a college professor. I might do something in an effort to positively impact students and their learning, but I can’t know exactly how and when these efforts might come to fruition. Sometimes a student who was very difficult in class will come back to me years later and out of the blue express deep appreciation. But in most cases, we will never know the full effects of our efforts.

The same is true of Buddhist practice, including prayer. There may be positive effects, but karmically it is difficult to know when and how something shifts. Sometimes a practice is presented as especially powerful, with a suggestion that outcomes will be known sooner rather than later. However, any experienced, sincere, and wise teacher will not make grand promises. If it sounds too good to be true, it probably is.

Because of the potential confusion caused by the popular use of the term “prayer,” some Buddhist traditions avoid the word altogether.

Buddhist practitioners, especially those who are new to the practice, are also susceptible to magical thinking. A practitioner may say, “I just spent ten continuous days praying for my brother and now his doctors have told him his cancer is in remission.” or “I did two months of Buddhist prayers for my mother’s heart condition, but my practice wasn’t strong enough and she died last week.” These are examples of deluded magical thinking and unrealistic expectations.

In Western culture, the notion of prayer for is more prevalent, as in prayer for a cure or for success, whereas in key strands of Buddhism, and in the Mahayana in particular, there’s more emphasis on the prayer of the Buddha as an expression of buddhanature, bodhi mind, and oneness. Because of the potential confusion caused by the popular use of the term “prayer,” some Buddhist traditions avoid the word altogether. rather than say “pray for,” one might speak of holding another in one’s thoughts. And instead of talking about the “prayer of,” one might speak of realization or awakening. Therefore, when you are concerned for another’s well-being, you might simply say, “I’m holding her in my thoughts” or “I’m holding you in my heart.” And instead of referring to the power of the Buddha’s prayer of awakening, you might refer to the power of the Buddha’s realization or simply awakening itself.

This is true of Shin Buddhism, where the central practice is invoking the power and name of Amida Buddha in the six-syllable phrase Namu Amida Butsu. It corresponds to the Sanskrit Namo Amitabha Buddha, which is a dynamic expression of the all-oneness of reality, meaning “I bow and entrust myself to the awakening of infinite light.”

Paying close attention, it is as if we can feel the gentle touch of our teacher or the Buddha herself, her palms gently caressing the back of our hands, helping bring our palms together, teaching us the feeling of boundless compassion and wisdom.

At the end of last year, I received an urgent message from a former student, Emily, who called for me from her deathbed. By the time I arrived, she had already begun her journey through the Great Transition. Yet as I looked straight into her eyes, it was as if there was no separation between us. She could no longer speak, but as her family and I chanted Namu Amida Butsu with our palms together, we were pulled deep into the awareness of boundless compassion and the ocean of oneness, and Emily was clearly present. Although we shed tears of deep sorrow, it was also an incredibly beautiful moment, because the power of great compassion completely enveloped our sorrow and transformed it into an even greater moment of boundless love.

It’s easy to forget that the ultimate realization is boundless compassion and oneness. When we put our palms together, it is not just one pair of hands meeting palm to palm. Paying close attention, it is as if we can feel the gentle touch of our teacher or the Buddha herself, her palms gently caressing the back of our hands, helping bring our palms together, teaching us the feeling of boundless compassion and wisdom. In that moment, whether we live or die, achieve health or not, become “enlightened” or not becomes secondary to knowing the power of buddhanature is fully present—that everything we need is between our palms as we bow, that the working of great compassion is already unfolding, here and now.

This is the third article in a series on prayer, “Why do Buddhists Pray?”, from “Buddhadharma: The Practitioner’s Quarterly.” Read the first article, “An Invitation,” and the second article, “The Paradox of Prayer.”