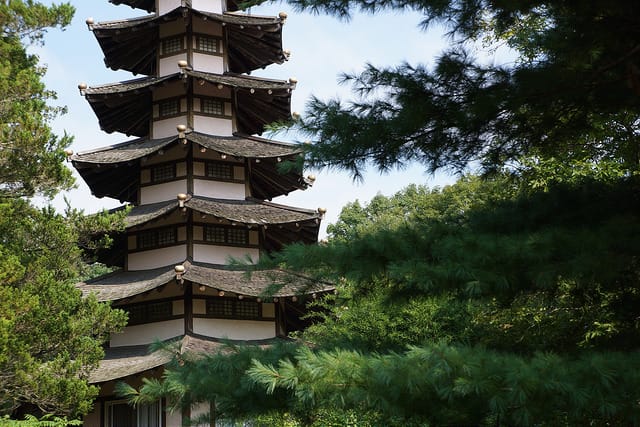 Zen Master Seung Sahn died of heart failure at Hwa Gye Sa temple in Korea on November 30. Known to his students as Dae Soen Sa Nim (Great Honored Zen Teacher), he was the first Korean Zen master to live and teach in the West and was the founding teacher of the Kwan Um School of Zen, an international organization of more than one hundred centers and groups. Zen Master Seung Sahn was the 78th patriarch in his line of transmission in the Chogye order of Korean Buddhism. More than 10,000 people attended his funeral at Su Dok Sa, his lineage temple. Long-time student Stanley Lombardo offers this tribute.

I remember him best bowing. For years he rose at 3 a.m. to do five hundred prostrations before the regular 108 with the group at morning practice. He was a sturdy figure in his short, grey bowing robe. His arms swung freely both on the descent and ascent. His forehead pressed against the mat for a precise moment before he rocked forward on his hands to rise. “Much bowing,” he used to say, “your center becomes stronger and stronger.”

Once, before a retreat in Boulder, I asked him what he did when he sat. He told me he recited the Great Dharani over and over, very fast, one repetition per breath. “Then your mind is like a washing machine on spin cycle, moving very fast. All the dirty water goes out, but the center is not moving.” The Great Dharani (or Dharani of Great Compassion) is a very long mantra—about 450 syllables. I asked him if he actually pronounced, sub-vocally, every syllable. He said he perceived each syllable, moment to moment. He was fond of the notion that in Buddhist psychology moments of perception go by at about the same fraction-per-second rate that frames of film must be projected in order to create the illusion of motion.

He liked movies, especially westerns and other action films. Once, during a kong-an (koan) interview, he told me, “You must become a western action hero!” He liked the movie E.T. because the children and the alien were so compassionate to each other, but he thought the title character fell short of being a true bodhisattva because he was so preoccupied with going home.

He himself was always on the road. By the early 1980’s he had Zen centers dotting the country, and several others in Europe and Asia. He visited them all regularly. His energy was very strong then, perhaps due to special practices he did. Once he stayed at our house in Kansas in a downstairs guest room. That night my wife and I, in bed upstairs, listened to bloodcurdling yells coming from his room. When dawn broke we went downstairs and found him in the kitchen, bags packed and ready to be driven to the airport, drinking tea and smiling. “Many demons attack last night but I all drive away.” And he explained the various Taoist yells he had used and how the feng shui of our town and the room on the side of the hill under the pine tree attracted demons and restless spirits. My wife, fearing her old teacher had lost his way, said, “Those demons are all in your mind, Soen Sa Nim.” As he opened the car door he waved his stick and shouted up to her, “Yah, you are correct, all in the mind—but you must understand this mind!”

He learned English when he came to this country in 1972 at the age of forty. He had received dharma transmission from the brilliant, eccentric Ko Bong Sunim at the age of twenty-one, and went on to direct temples both in Korea and in Japan. Ko Bong had told him, “I am the flower, you are the bee. You must spread this teaching throughout the world.” So in 1972 he landed in Providence, Rhode Island, and began living with and teaching a group of Brown University students who had found him after they heard a Zen master was working in a local laundromat.

Even though he took English classes at Harvard, his use of the language was always shaped by the directness and urgency of his Zen teaching. “What are you? You don’t know, so only go straight, Don’t Know, always, everywhere.” This “Don’t Know” epitomized his style, a masterful use of colloquial English to translate, in this case, the Chinese wu shin—“No Mind”— and bring it to life, manifesting the concept and instilling it rather than explaining it. He taught us to breathe in “What am I?” and breathe out “Don’t Knoooooow.” It became for many of us, certainly for me, the Great Question. He also told us, “Just do it!” years before Nike started using the phrase, and “Don’t make anything,” and “Put it all down,” and “Try, try, try, for ten thousand years, non-stop.” These were not presented as slogans but as sincere admonitions, always in the moment, no matter how often repeated.

He was a master storyteller and delivered much of his teaching through stories, gesticulating and mugging his way his way through tall Buddhist tales and becoming in turn a wise old woman, a proud but naïve sutra master, a bewildered Manjushri, a stern Nam Cheon killing the cat. Many of these stories can be found in his books, Dropping Ashes on the Buddha and Compass of Zen, but of course it was his living presence that kept us enthralled. It was not just his energy. There was a dearness about him in everything he did, but especially when he spoke. Interviews with him were warm and clear, like “water flowing into water” as Barbara Rhodes (Zen Master Soeng Hyang) put it.

My first retreat with him was a three-day kido, a chanting retreat, in 1978 at a house on the coast at Big Sur. I helped him build an altar out of scrap lumber, and he placed on it a beautiful, delicate, ornate golden statue of Kwan Yin. When someone asked him why we were using such an elaborate statue for the retreat instead of a plain Buddha, he replied that Kwan Yin made herself beautiful to help all beings. We followed the standard retreat schedule, early morning until late evening, but instead of sitting we chanted Kwan Se Um Bosal for hours on end, each of us equipped with a percussion instrument. Soen Sa Nim setting the tempo with a huge moktak (fish-shaped drum). Assigned to clean his room during one of the breaks, I went in and found him not resting but listening intently to a tape recording of the previous session, moving his lips.

His talks during that retreat were all about the Bodhisattva of Compassion, and the spirit of compassion as the heart of Zen practice. “When you are thinking, your mind and my mind are different. When you are not thinking, your mind and my mind are the same. That is Zen mind. The name for that is Kwan Se Um Bosal, Great Love, Great Compassion, the Great Bodhisattva Way.”

He believed in chanting as the easiest form of practice and the best form of “together action.” His own chanting was like a great bell. It seemed to reverberate directly from his gut into ours. He was absolutely still when he chanted.

When he was twenty-one years old, disenchanted with politics and philosophy, he undertook a hundred-day solo retreat in the mountains, chanting with a moktak twenty hours a day, taking cold baths at night, and eating only pine needles. At the end of the retreat he wrote this poem:

The road at the bottom of Won Gak Mountain
Is not the present road.
The man climbing with his backpack
Is not a man of the past.

His diet on that retreat may have given him the diabetes he had to cope with the rest of his life. It did not slow him down; it was simply another vehicle for his teaching. He always spoke of his body as a rental car, and he would say that when something is ripe it will soon be rotten.

Towards the end of his life he was given the title Dae Jong Sa (Great Elder Teacher), the highest title bestowed by the Chogye order. When he was presented with the accoutrements of this position, he said, “This whisk is heavy.”

The last time I heard him teach was at a precepts ceremony.As usual, he told two stories to illustrate the importance of correct direction, knowing when the precepts are open and when they are closed. First he told the story of Hae Chung, a precepts-keeping monk who would not even uproot grass in order to save his own life and was made national teacher by the emperor in recognition of his virtue. Then he told the story of Nam Cheon killing the cat, a kong-an that has opened many Zen students’ minds. When he came to the part of the story where Joju puts his sandals on his head, he took the brass handbell from the table and put it on his head. Balancing it there he looked at the sangha serenely and said, “So keep precepts, become the national teacher. Break precepts, become a great Zen master. Which one do you like?” He always left us with a question. But when Su Bong Sunim, his dharma heir who died in 1994, asked him, “What is the shortcut to Zen?” he answered, “Not for me.” This was how he lived his life—not for himself, but for all beings. The poem on the precepts certificate reads:

Good and evil have no self-nature.
Holy and unholy are empty names.
In front of the door is the land of stillness and light.
Spring comes, the grass grows by itself.