When Grace Schireson gets it all wrong with her socks, she learns what’s more important than the rules. 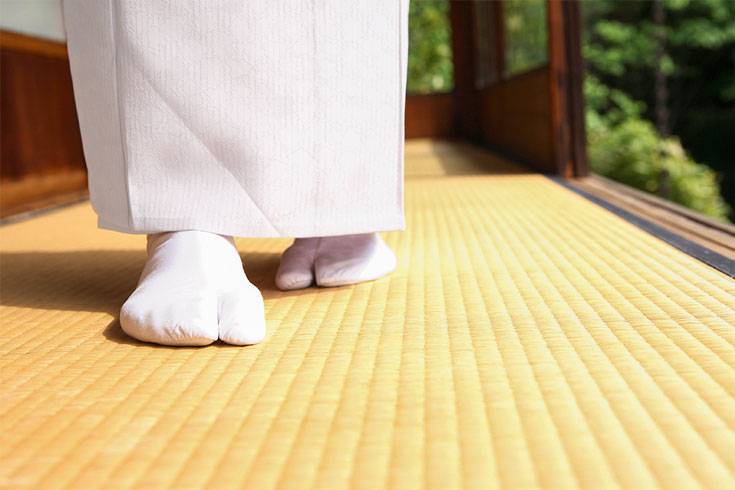 In Berkeley during the sixties, “shacking up” was one of the most common forms of dating. Getting married was considered old-fashioned—and not in a good way. My future husband and I were living together as we finished our undergraduate degrees in 1968 and contemplated immigrating to Canada so he would not be drafted for the Vietnam War. I had located a yoga camp in Quebec’s Laurentian Mountains, and I believed being among yogis and yoginis would help us make a smooth transition from Berkeley to Canada. Imagine my surprise when I learned from the yoga camp director that my “fiancé” and I would not be sharing a room in the Catholic province of Quebec since it was against their laws.

When I shared the news with my live-in boyfriend and future husband, Peter Schireson, he suggested that we get mar-ried to avoid the hassle. Not the most romantic proposal, but a proposal nonetheless. The two religions—Zen and Judaism—within which I had practiced were possible sources for a wed-ding ceremony. We had only a month before graduating from Berkeley and immigrating to Canada. We needed to be quick and decisive in planning our wedding. First we went to visit a synagogue in Berkeley, but we had neglected to call ahead to make an appointment, and it was closed. Peter, an ardent atheistic Zen enthusiast, was outraged and wondered if God had left the building unattended because He was not working after hours. I decided to call Suzuki Roshi at the Zen Buddhist temple on Bush Street in San Francisco to see if he could provide a wedding ceremony. We set an appointment.

We learn here how practice may open the heart or harden it.

We had two meetings with Suzuki Roshi to plan our wed-ding. He explained the ceremony and asked if we could sew a rakusu, a traditional hand-sewn lay Buddhist surplice, to prepare for taking the bodhisattva precepts as part of the wed-ding ceremony. We explained that we did not have much time because we needed to leave the United States immediately following university graduation or Peter would be drafted. Suzuki Roshi nodded his understanding and agreed to do the Buddhist wedding’s precepts ceremony without the traditional rakusu. Years later I learned of his sad experiences during World War II in Japan. I saw the photos of him when the Japanese army came to melt his temple bell to make more weapons. Suzuki Roshi had lived through many experiences that made him sympathetic to our circumstances.

On the day of the wedding, I dressed in the customary “something old, something new, something borrowed, some-thing blue” for good luck. Of the new, I wore white tabi, split-toe Japanese socks (that I thought were slippers) I had bought in Japantown while visiting Suzuki Roshi’s Zen temple. At our preparatory meetings, I had observed Suzuki Roshi wearing tabi inside the temple. When we arrived at the temple for the wedding, Suzuki Roshi was waiting for us, watching from the front door as I exited the car wearing only the white tabi as shoes on the street, crossed Bush Street in the white tabi, climbed the stairs to the temple in my now heavily soiled white tabi, and entered the zendo still wearing my now filthy white tabi.

One does not wear street shoes into the zendo; there is an emphasis on cleanliness and purity in the Buddha hall. If tabi are worn outside, they are worn with additional shoes covering them—shoes that are left on the shoe rack before entering the zendo. Suzuki Roshi had taught this to all his students—but I hadn’t yet caught on. I didn’t learn this during my wedding because he said nothing about my faux pas before, during, or after I wore dirty tabi into the zendo on that special day.

Why did Suzuki Roshi let me dirty the zendo in that way? Many years later, I reflected on my mistake. Suzuki Roshi was practicing compassion in the moment. Had any of his students been there, I am sure they would have corrected me and my dirty tabi might not have made it into the zendo. There are many sensible reasons for making sure we don’t bring dirt into the zendo. At the same time, it sometimes seems that the smallest mistakes are pounced on in Zen centers. Zen centers can feel like correction machines. Mine was a not-so-small, correctable mistake.

Suzuki Roshi’s choice not to correct me reminds me of a wonderful Zen folk story from China: “Why Did the Old Lady Burn Down the Hut?”

There was an old woman in China who had supported a monk for over twenty years. She had built a little hut for him and fed him while he was meditating. Finally she wondered just what progress he had made in all this time.

To find out, she obtained the help of a girl rich in desire. “Go and embrace him,” she told her, “and then ask him suddenly, ‘What now?’”

The girl called upon the monk and without much ado caressed him, asking him what he was going to do about it.

“An old tree grows on a cold rock in winter,” replied the monk somewhat poetically. “Nowhere is there any warmth.”

The girl returned and related what he had said.

“To think I fed that fellow for twenty years!” exclaimed the old woman in anger. “He showed no consideration for your needs, no disposition to explain your condition. He need not have responded to passion, but at least he should have evidenced some compassion.”

She at once went to the hut of the monk and burned it down.

The old woman’s monk ignored the young woman’s feelings in favor of the precept to maintain celibacy. How self-centered was he to imagine that this “girl rich in desire” found him attractive? Not only did he fail to detect the ruse, but he did not question the girl’s motivation or bother to explain his reluctance. If she really did want to have sex with this old monk, why didn’t he question her motivation? Where was his compassion in that moment? Was he really developing his awareness of others, not just himself, through his practice in the old woman’s hut? She could not support the practice of a monk who spent years following rules but not learning to care for another person. 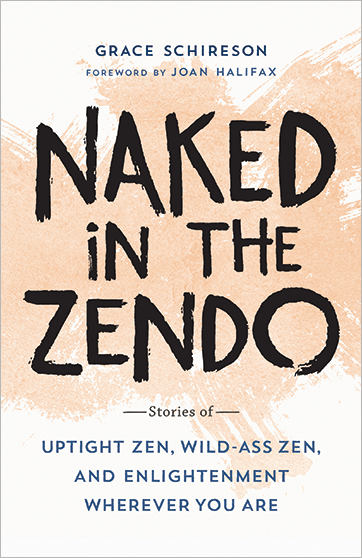 “Naked in the Zendo
Stories of Uptight Zen, Wild-Ass Zen, and Enlightenment Wherever You Are”
By Grace Schireson
Shambhala Publications,
184 pages, paperback, $16.95

There are good reasons to follow rules and restrictions in Zen: protecting young students from manipulation and abuse, maintaining hygiene, strengthening concentration, embodying ritual, finding oneness within the group through unified activity, handling precious objects with attention, and many more. But blind obedience to rules isn’t on the list as an essential part of Zen training. Clearly Suzuki Roshi was not suffering from the rule rigidity that blossoms in some Zen centers.

I was violating all the rules of protocol and hygiene by wearing street-filthy tabi into the zendo, but Suzuki Roshi would not inflict an embarrassing correction on a young bride. I believe that through his big mind, he silently surveyed the situation, did the calculations of how he might speak to me, and finally concluded that we would all survive my dirty tabi but that I might suffer from his correction. A mind opening to the entirety of circumstances concluded that saying nothing was the best course of action in this moment. While we would survive my dirty mistake, how would I remember my wedding ceremony if he had corrected me?

I remember Suzuki Roshi’s response to a young woman confessing her attraction to him. He didn’t answer with the “withered tree,” or “I don’t find you attractive,” or even “I’m married and I’m a priest and I must keep my vows.” He told her, “Don’t worry. I have enough discipline for both of us.” Just as he had left my self-esteem intact on my wedding day, through his open and compassionate mind he delivered a tender message to this young woman. Letting her retain her sense of being attractive, he told her that her desire demanded his discipline. His discipline was sufficient to take care of both of them. Importantly, she could explore her feelings safely within his integrity.

We learn here how practice may open the heart or harden it. Does the practice group focus on Buddhist principles and observing rules, or does it build a connected human bridge, out of kindness, to help students cross over to find Buddha right here and now? Some groups may focus on correct posture or correct spacing in the kinhin (walking meditation) line. While the formal practice helps shape the mind, is it the essential? As teachers, parents, friends, or observers, it is essential that we express the same flexible mind and love to newcomers who show up at our well-regulated training centers, to travelers from other centers, and to the many lay practitioners who are seeking meaning but not orthodoxy. I teach my own students, “You are not training to become a doormat or to treat other students as doormats.” How do we practice with both full attention and open hearts? Caring for all beings requires a lot of love, and Suzuki Roshi taught me that Zen is nothing without love. The opening of mind facilitates this loving response, and it is contagious.

From Naked in the Zendo: Stories of Uptight Zen, Wild-Ass Zen, and Enlightenment Wherever You Are © 2019 by Grace Jill Schireson. Reprinted in arrangement with Shambhala Publications.