The road to happiness, says Sharon Salzberg, is paved with kindness. 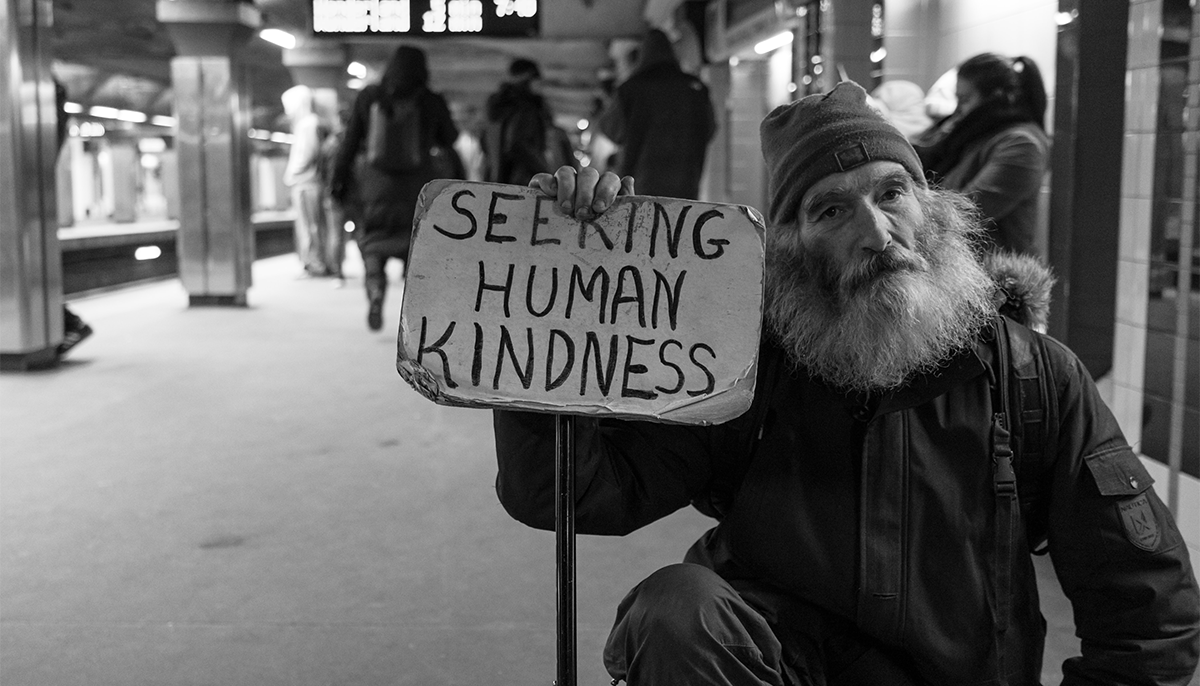 When we see how quickly life just disappears, how even the longest life span is over in a flash, we realize how important it is for us to create the conditions that help us most directly move toward true happiness. The bravest thing we can do—the beginning of an awakened life of kindness—is to question our assumptions about what we are capable of, what brings us happiness, and what life can be about.

Many factors make developing kindness challenging. We may feel competitive and find a tad of satisfaction when someone is a little down, so that we can feel superior. We might genuinely care but be afraid to get involved. We might find ourselves dominated by a feeling of helplessness or a sense that anything we offer would be insufficient. We might be confused about the right thing to do.

If we are willing to take a risk anyway and consciously practice kindness, we can learn that, in contrast to the messages we hear from the world about how to be happy—”Buy more,” “Compete more strongly,” “It’s a dog-eat-dog world”—a more refined happiness comes from feeling joined, from a sense of belonging—both to this life and to one another. We need to hone our own sense of purpose. We need to understand what will actually allow happiness beyond acquisition, what will help us realize happiness more steadfast than any temporary pleasure or fleeting triumph.

Life can and does turn on a dime. One little rotation of the wheel of fortune, and we’re no longer feeling so on top of life and impervious to change.

Addressing happiness, what causes it, and how to practice those causes, the Buddha taught simplicity and the path to liberation.

First we look at our vision of life and of ourselves in relation to one another. This is something that is not fixed or determined but can grow and expand as we perceive things more acutely, or see them from a different angle. I saw this several years ago, when I had been quite sick all winter. I had bronchitis, and every time I began to get better I’d have a relapse. Finally, I actually began to recover.

I was living in New York City at the time, and walking down the street one day, I heard a woman’s voice saying, “I was very sick all winter.” Naturally intrigued, I turned around, and saw a woman handing a street person some money. She went on talking to him: “I had pneumonia, and every time I started to get better I’d have a relapse. Now I am finally really getting better, and I just wanted to share the joy.”

I was taken aback. Realizing that I had walked right by that man without a thought of sharing the joy of my own renewed health, I wondered, “Should I go up to him, hand him more money, and say, ‘You won’t believe this, but I was really sick all winter too, and I’d like to share some joy as well.’?”

I ended up not doing that, but I felt I’d learned something from that woman. The decision whether or not to give a street person money is complex, and there is no single answer to suit every situation. What made this such a forceful lesson for me was that I had walked right by that man without any thought that his life had something to do with mine. Without that view, there was no impetus to relate to him in any way—through noticing his sorrow, or thinking of sharing my own joy.

Life can and does turn on a dime. One little rotation of the wheel of fortune, and we’re no longer feeling so on top of life and impervious to change. Kindness doesn’t mean saying “I, who have everything together and am invulnerable, am standing way over here, looking at you way over there, and since our lives don’t touch except in this tiny, peripheral way at this moment, I am going to just toss you some money.”

With insight we see that we all share the urge toward happiness, and that no one leaves this earth without having suffered. Thus we look at others and see something not only about them, but also about ourselves.

Often this insight extends only so far. Then something may happen—a confrontation, a new relationship, a dawning view of the intricacy of a person’s life—and we find our perspective broadening. A friend of mine was a wonderfully empathic therapist. One day a man came to see her, beseeching her to be his therapist. She found his political views alienating, his feelings about women difficult, and his behavior quite annoying. In short, she didn’t like him and urged him to find another therapist. However, because he very much wanted to work with her, she finally acquiesced and took him on as a client.

Our goal becomes the release from suffering of all beings, and so we view ourselves as working on behalf of everyone.

Now, because he was her client, she tried to look with compassion instead of disdain or repugnance at his unskillful behavior and all the ways he shut himself off. She began to see all the ways in which his life was difficult. Soon, even though she continued to see his unpleasant behavior, she found herself feeling that she was his ally. Her goal became his release from suffering, which would also affect those around him. As she put it, he had become “hers.” Even though I don’t believe she ever came to like him or approve of many of his views, she came to care about him.

Hearing this story, I began to think of the role of the bodhisattva. In the Buddhist tradition, bodhisattvas aspire to enlightenment, dedicating their transformed minds and actions to the liberation of all beings. When we aspire to be a bodhisattva, everyone becomes “ours,” in a way. Our goal becomes the release from suffering of all beings, and so we view ourselves as working on behalf of everyone. Even when we take strong steps to keep someone from acting harmfully, we do this, to the best of our ability, without rancor or contempt. Developing this perspective is a great challenge, and it is also a great opportunity to bring about the unique happiness compassion can offer.

Reprinted from The Force of Kindness by Sharon Salzberg (Sounds True).

Sharon Salzberg is co-founder of Insight Meditation Society in Barre, Massachusetts, and the author of many books, including the New York Times bestseller, Real Happiness; her seminal work, Lovingkindness; and her latest, Real Change: Mindfulness To Heal Ourselves and the World.