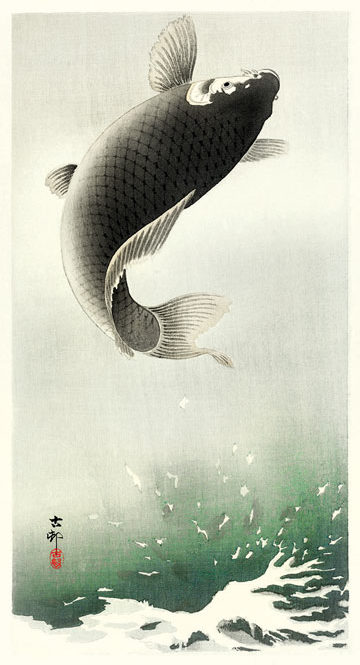 Chinese legend has it that if a carp swims up a waterfall, it transforms into a dragon. Be like that carp, says Koshin Paley Ellison. Throw your whole self into waking up.

Below the New York Zen Center for Contemplative Care there is a very enthusiastic personal trainer named Sammy, who leads a loud exercise class at the exact same time that we have our silent meditation group on Monday and Wednesday evenings and Saturday and Sunday mornings. For the last year, I’ve had an ongoing relationship with Sammy that consists of my constantly going downstairs and saying, “Hi, Sammy. I know you’re really excited about your class, but the floor is vibrating upstairs. Can you turn the music down?” “Of course,” he says. “I am so sorry.” And then the next time our group meets, it happens again. Over and over again.

Recently, though, there was a night that I decided not to go downstairs. It was partly because I was aware of my feeling of righteousness—you know, “I’ve gone downstairs five hundred times. I’m not going downstairs again. How many times do I have to go downstairs before he stops playing his music so loudly?” I looked like I was meditating, but actually I was sitting there stewing, getting caught up in and seduced by the righteousness of it, elevating myself above this inconsiderate person Sammy, and just generally being a jerk about it.

But then I started thinking about the times in my own apartment when I’ve put on music that I thought was great and cranked it up, totally unaware of the people in the apartments next to mine. Because our Zen Center is in the middle of Manhattan, we often hear ambulances, fire trucks, and other street noises, and hearing those during my meditation has always been an inspiring experience for me. Each time I hear the ambulance or fire truck, it moves me to know that people are responding to someone who is in trouble. And yet for some reason I had never approached Sammy’s music in the same way; it had always felt like an intrusion. I realized that I had never actually tried sitting there and just feeling the beat of it.

This is what wakefulness is—simply looking at what it is we’re doing. It means instead of being led by our conditioned, automatic, reactive way of being, we become deeply curious about what is arising in our body, our mind, and the world around us. It could be as we wait in line for the local coffee place: maybe the line is taking too long or the person ahead of us is complaining, and we’re getting more irritated by the second. Wakefulness is simply noting that reactivity and returning our attention back to the feeling of our feet on the ground or the softness of our belly. It’s simply seeing how quickly our mind can turn someone from a friend into an enemy, and then back into a friend again.

This is exactly where intimacy arises, and where we can change how we relate to the people around us. For me, finally feeling the beat of Sammy’s music was also a way of enjoying my relationship with him, and remembering how I’m just like him, too. For the last year, all the times I’d been “meditating,” I was actually missing the opportunity to do the work that’s truly important—the realization that “Yeah. Me and you, Sammy. We’re in this together.”

One thing about wakefulness is that there is no arrival; you’re never done. Wakefulness is a willingness to endlessly investigate, and that’s where the intimacy grows.

The other thing about it is that it takes everything—true courage and commitment—and includes everyone. The challenge may come from someone like Sammy or someone much more difficult. I always think, for instance, of family trips home as one of the greatest barometers for our practice. Home for the holidays, to the people who ignite all of your oldest, deepest reactivity. Can you be awake and intimate with your mother or father or brother or sister or aunt, whoever it is who is the biggest pain in your ass and gets under your skin the most?

I remember five years ago I was with my father at Cape Cod, where my family spent most of our summers when I was growing up. My dad and I like to take long, epic walks on the beach together. We were on one of these walks, going down the shoreline, when he asked me for my advice about a particular person, someone who faces a lot of challenges, but perhaps more pertinently for me in that moment, someone who has deeply harmed me, as well as many other people.

It wasn’t the first time Dad had asked me for advice about this person. In fact, he does it a lot, and historically it has made me crazy. I sense that he’s not able to see this person for the way he actually is, which has made me feel unsafe in the past. So when my father asks me for advice about him, it can feel like a potential betrayal of a young part of myself who needed a protector.

There we were, on this beautiful beach, when my father asked for my advice again. And even though I knew we were repeating the same old pattern, I dived into it. I stepped into the trap we co-create.

From zero to one hundred in a second, I was totally enraged with my dad, just pissed off and frustrated, and we got into a heated fight. I was about to say something really unkind when I stopped for a second and said, “Let’s look at the ocean.” That was the irony of it—here we were in this gorgeous place, going after each other’s necks. After a pause and feeling my breath in my belly, I said, “I’m sorry I agreed to answer your question. I understand that you want my help. I love you so much, and I would love to help you, but this dynamic never ends up going well.” Just like that, something broke open. It was extraordinary. In that moment I felt full, complete love for my father, even though one minute before I had been feeling nothing but rage. 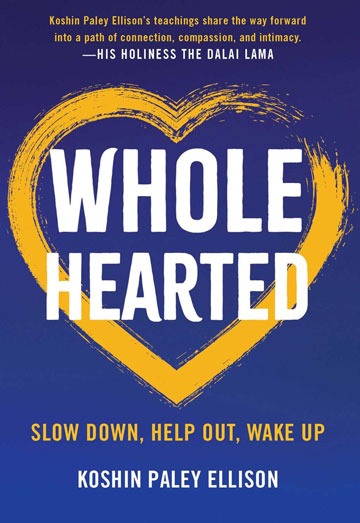 From “Wholehearted: Slow Down, Help Out, Wake Up”
By Koshin Paley Ellison
Wisdom Publications
208 pages, paperback, $11.95

He actually still asks me for advice about this person sometimes. These days, I pause, breathe, and say no. And it feels great. I waited a long time for him to change. I felt that because I had been the one who had been wronged, that he should be the one to alter his behavior. But actually, I was the one who needed to shift. I needed to change the dynamic in myself. I need to continuously practice being the protector for the young part of me. That’s often the problem when we talk about relationships, isn’t it? It’s tends to go like this: “Well, when they change their behavior, then we’re going to have a great time and a fabulous relationship.” That’s often the critical error. We’re the ones who need to do the changing, even if it’s totally terrifying.

There’s an old Chinese story about carp and the origin of dragons. Carp are like salmon: they swim upstream by flinging themselves above the water. It’s an intense thing to see, the golden fish throwing its body with all of its might. The myth goes that the carp transforms into a dragon, but only if it throws its whole body up the waterfall and through the dragon’s gate at the end of the Yellow River. The dragon, of course, is a symbol of enlightenment—of complete wakefulness.

Sometimes—in moments like the one I had with my father—the beauty is in taking your whole body, using all your might, to just stop. Just stop. And once you’ve done that, truly feel what that’s like. Establishing trust in that feeling of peace is what allows us to take refuge, to commit totally to wakefulness in the midst of difficult moments. To me, that’s what taking refuge means: the decision that we’re going to live from a different kind of ground. Not the ground of “I’m right” or the ground of “You’re an asshole” but the ground of intimacy.

But until we’re willing to have the courage and commitment to truly change the way we function, then “taking refuge” is just some idea. We need to be that golden carp. We might be scared, we might be afraid, and we are completely committed to waking up.