“Don’t Just Do Something, Sit There.” You’ve probably heard someone say that, or said it yourself. It’s also an advertising tagline for a meditation supplies company. And now, it’s been uttered by Earl, the patriarch of the nationally syndicated comic strip, Pickles. But it was Sylvia Boorstein who gave the phrase to us. 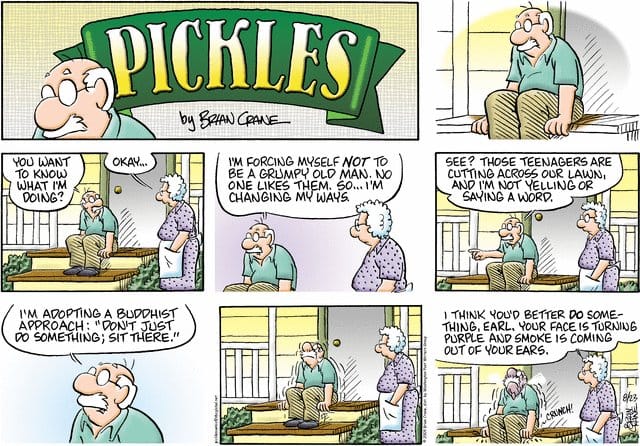 “Don’t Just Do Something, Sit There” was the title, of course, of one of Sylvia’s books, a particularly inspiring (and breezy, though not lightweight) guide to creating your own meditation retreat. It is in ways, “her phrase” — in that it’s so associated with her. But others of us (Buddhists and non-Buddhists, cartoonists and non-cartoonists), are happy to use it; it’s memorable, jarring (in a positive way), and it says a lot in just a few words.

I wondered if Sylvia had seen this. She hadn’t. Her reaction? “Love it!”

I asked her for more and she sent the following, with the understanding that it was meant to be shared with SunSpace readers:

What makes the cartoon funny is that that old guy IS doing something. He is fuming! He is mad! He is just holding it in rather than shouting it out, and clearly, it cannot be good for him. I think the phrase needs notation, like music, to let the reader know where the accent goes: Don’t JUST do something (i.e. impulsively respond) — Think It Over!

When the book I wrote, Don’t Just Do Something, Sit There, was published, I went on a book tour to a number of cities on the west coast. One one of my interviewers was a talk show radio host whose political stance was altogether different from mine. As I sat next to her, sharing a microphone in the middle of an open-air studio in a shopping center, she reviewed the headlines of the days news before including me in the conversation.

Her presentation was (in my view) inflammatory. After she introduced me, her first question was this:

“Well, you’ve heard what I’ve been telling my listeners. It is up to them to make a difference. Go out to City Hall. Talk to your legislators. Get on school boards. Make a difference. And you, Sylvia Boorstein, are telling people, ‘Don’t just do something, sit there.’ What do you have to say for yourself?”

I said, “I could not agree with you more. Absolutely, each of us is obligated to make a difference, to act when we see that something needs to be done. I’m suggesting that it is valuable to be still for long enough to figure out what would be the most helpful thing to do.”

From that point on, the interview was fun for both of us. (Which was great, because until that point I was feeling very shaky.)

So, it isn’t about not DOING anything. It’s about not JUST doing.

It’s about thinking and then doing.

Well. Glad I asked! Thanks, Sylvia.

Thanks also to the wonderful Thanissaro Bhikkhu for the heads-up on this comic.