Gene Smith dedicated his life to preserving Tibet’s literary heritage, and played a key role in its survival. In December he passed away, at the age of 74. Janet Gyatso remembers the man and his historic contribution. 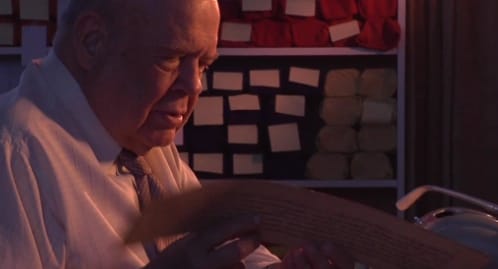 E. Gene Smith examines a book in this still from “Digital Dharma.”

Gene Smith was an academic maverick and preeminent pioneer of Tibetan Studies who singlehandedly preserved for posterity the vast heritage of Tibet’s texts on philosophy, history, and culture. For decades, he had been recognized by scholars around the world as the de facto dean of Tibetan Studies and held in the highest regard due to his extraordinary accomplishments in protecting and sharing Tibet’s imperiled literary treasures and his dedication to making Tibetan literature universally accessible. Smith had extensive knowledge of Tibetan religious history, and provided generous assistance to scholars worldwide for more than forty years.

Smith died in December at his New York City home. His death was likely connected to several heart-related incidents he suffered during a trip to South Asia. At the time of his death, Smith was the senior research scholar at the Tibetan Buddhist Resource Center (TBRC), an online digital library and bibliographical resource for the study of Tibetan literature that he founded in 1999. At the heart of this collection, which has been disseminated to university libraries around the world and Buddhist monasteries throughout Asia, are the manuscripts and blockprints that Tibetan monks and scholars started bringing out on their backs in the fifties as they fled the Chinese Communist invasion of their country.

Smith, arriving in India in the mid-sixties, recognized the enormous importance of this literary heritage pouring out of Tibet. He quickly established personal connections with Tibetan teachers, and mobilized the resources and institutional structures to publish, preserve, and catalog these works. Later he also made connections within China to arrange for the publication of hundreds of collections and single rare works of Tibetan literature, and continued these labors until he died. At the TBRC, Smith furthered that contribution by using his unsurpassed bibliographical knowledge to catalog the texts that had come out of Tibet over the last half century in terms of their history, authors, and contents.

Ellis Gene Smith was born in 1936 in Ogden, Utah, to a traditional Mormon family, and realized his stunning intellectual achievements without the usual institutional support or positions. His father was a scientist working in a federal guided-missile program, one result of which was that the family moved around a lot. After high school, Smith received a congressional appointment to the military academy at West Point, which he never took up. He went instead to study briefly at Adelphi College, Hobart College, University of Utah, and finally at the University of Washington in Seattle. There he met one of the greatest traditional Tibetan scholars of the twentieth century, Ven. Deshung Rinpoche Kunga Tenpai Nyima—the tutor to the head of the Phuntso Phodrang branch of the Sakya school of Tibetan Buddhism—who had been brought to teach at Washington during the sixties. During this time, Smith began his comprehensive study of Tibetan literature and history, rapidly becoming fluent in both colloquial and classical Tibetan, and absorbing much of Deshung Rinpoche’s encyclopedic knowledge and enthusiasm for Tibetan intellectual history. In 1964, Smith completed his Ph.D. qualifying exams and travelled to University of Leiden in the Netherlands for advanced studies in Sanskrit and Pali. In 1965, he went to India under a Foreign Area Fellowship Program grant from the Ford Foundation to prepare for writing his doctoral thesis.

In India, Smith found himself uniquely qualified to bring the publishing industry of India together with the hundreds of Tibetan refugee scholars streaming out of Tibet, often carrying no other possessions than their precious books. At that time, the Indian publishing industry was involved in an ingenious arrangement with the American Library of Congress in which India paid back loans to the United States in the form of books, which were then distributed to participating U.S. libraries. Recognizing an opportunity to exploit this program to preserve and publish the literary heritage then coming out of Tibet, Smith took a job in the New Delhi field office of the Library of Congress in 1968. He went on to demonstrate great initiative and creativity in contacting all sects and groups of scholarly Tibetan refugees, identifying thousands of rare and important manuscripts, and arranging to have them edited, copied, and published.

This work was an unparalleled venture in culture preservation and documentation, and it depended entirely upon Smith’s genius—a masterful combination of organizational skills and intellectual insight. The upshot was that American university libraries became stocked with comprehensive collections of indigenous Tibetan literature, collections that have become the basis for all Tibetological research in the United States.

Not only did Smith oversee this massive preservation and publication venture, he wrote countless introductions to these publications, providing the modern world with virtually its first systematic glimpse of Tibetan history in detail. These famous introductions, now published in the anthology Among Tibetan Texts: History and Literature of the Himalayan Plateau, have been the mainstay of Tibetological research around the world since the early seventies, and demonstrated Smith’s knowledge of the field, far exceeding that of any other non-Tibetan scholar (and most Tibetan scholars as well). His introductions provided the first—and only—detailed guide map to the teachers, schools, institutions, meditative traditions, rituals, lineages, patrons, literary practices, genres, bibliography, philosophical ideas, religious practices, and arts and crafts of Tibetan religious and political history.

Smith became Library of Congress field director for India in 1980 and held that position until 1985, when he was transferred to Indonesia. He stayed in Jakarta running the Southeast Asian programs until 1994, when he was assigned to the Middle Eastern office in Cairo. In February 1997, he took early retirement from the Library of Congress and returned to the United States, bringing with him his own extensive library of Tibetan materials. He served first as a consultant to the Trace Foundation for the establishment of Himalayan and Inner Asian Resources, then relocated to Cambridge, Massachusetts, and joined Wisdom Publications as acquisitions editor, launching the Studies in Indian and Tibetan Buddhism series. Its aim was to provide a forum for significant new contributions to scholarship on Indian and Tibetan Buddhism and to make accessible seminal research not widely known outside a narrow specialist audience.

While at Wisdom, Smith still had the unflagging energy and enthusiasm to develop innovative means to make his unique knowledge and literature available to present and future generations. Joining forces with entrepreneur David Lunsford—founder of the Bodhi Foundation and a former engineer with computer giant Dell Inc.—and other friends, Smith proceeded to establish the Tibetan Buddhist Resource Center. In 2002, with support from the Donald and Shelley Rubin Foundation, he moved the TBRC to New York City to increase his library’s accessibility, and it quickly became the premier site for Tibetological research in the United States, if not the world.

Smith freely provided bibliographic information to virtually every Tibetologist. Given that there are very few catalogs, indices, or other critical apparatus to this extensive body of Tibetan literature, it is no exaggeration to say that our Tibetological knowledge would be a bare shadow of what it is today had Gene Smith never existed. He remained the first resource that scholars consulted for information, and the material he provided became the backbone of a large majority of Tibetological doctoral theses and books. Thousands of scholars are not only indebted to Smith for his generosity in sharing his encyclopedic knowledge with them, but miss him as a warm and kind-hearted friend.

Representatives of more than three hundred Tibetan Buddhist monasteries in Tibet, India, Nepal, and Bhutan unanimously nominated Smith for a lifetime achievement award for his contributions to the preservation of the Tibetan literary and spiritual heritage. The award ceremony took place at the Nyingma Monlam Chenmo international prayer festival in Bodhgaya in January 2010. Smith also received the Library of Congress Award for Meritorious Service on several occasions, and the Distinguished Service Award in 1997. At the time of his death, the University of Leiden was arranging for a ceremony to award Smith an honorary doctoral degree, which he had never completed despite his many years of outstanding academic work.

Janet Gyatso is the Hershey Professor of Buddhist Studies at Harvard University’s Divinity School, and author of Apparitions of the Self and Women in Tibet. She is past president of the International Association of Tibetan Studies and the current co-chair of the Buddhism Section of the American Academy of Religion.