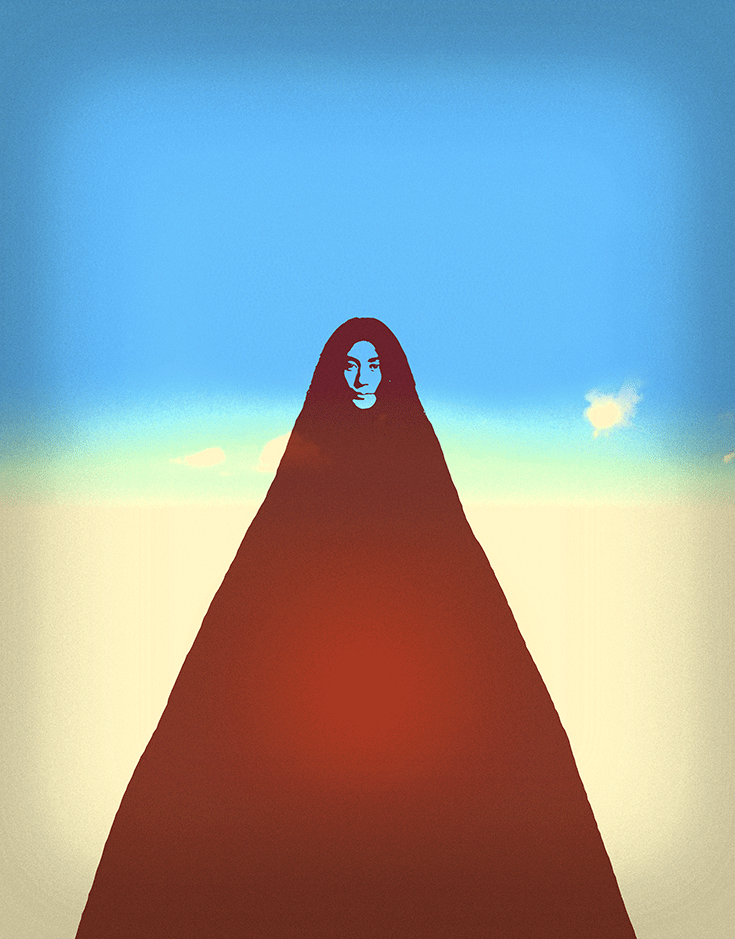 Everyone, it seemed, liked to tell Lisa Carver what she couldn’t do: it wasn’t proper, it wasn’t art, it wasn’t done. But Zen koans and Yoko Ono turned all that upside down.

Decades before the dark and angry performance art/No Wave scene of the late eighties and early nineties, Yoko Ono was creating radically unconventional conceptual art. Raised Buddhist and Christian in an upper-class family in Tokyo, Yoko was expected to be peaceful and pretty without any anger, without revolt. “I was like a domesticated animal being fed on information,” she told the Evening Standard in 1968. “I hated it.”

Her goal as an artist was not to train her audience. She wanted to untrain them. When she showed up at an art gallery and stood there screaming and moaning with no context, no introduction, no band, no melody, who of the shocked attendees could have guessed she was a classically trained musician and opera singer?

Many commenters on YouTube say about Yoko’s singing things like “She hurts my ears!” and from that they deduce she is insane. (I’m not exaggerating; go look!) In its natural state, though, pain is for teaching, not dominating us. It’s only when we’re forced to believe—or pretend to believe—what is not true, that pain hurts: when your abuser tells you This is love, when your forced-memorizing school tells you This is learning, when pyramid-scheme social structures tell you This is family order.

Conceptual and performance art and unorthodox singing and experimental film and writing employ the pain of confusion, of shaking things up, to expose and fight the pain that is already there, accepted. In the moment of disarray, art, like Buddhism, says to you, “Is ‘That’s just how it is’ really how it is?” That question can turn walls to windows, just large enough to crawl out of. . . and then you can set off running.

In 1985, when I was sixteen years old, having so far only lived with one parent or the other in small towns, and without even a visit to an art museum, I bought a twenty-five-cent used copy of a Yoko Ono record. When I lay the needle down on the spinning disc, a disjointed cacophony rose up and filled the room with angles and senselessness and the raw. All I had known before was Scooby Doo and Columbo on TV, songs by Bread and Anne Murray on the radio, and assigned reading at school. None expressed the sort of preexistence struggle I heard in Ono’s voice. She sounded foreign, but also not categorizable by foreignness. I thought, “Why on earth would anyone make music like this?!”

That question led to others, ending with this one: “Why don’t I make music?” And then I did. That led to a ten-year career in studio and stage in six countries.

In that first moment with her record, I wasn’t aware of what Ono was doing for me: opening everything up, unwrapping my tight little life. The Why not? decisions I was starting to make felt like my own thoughts spontaneously erupting. And they were. Ono did not (and still does not) try to impose an ideology. She doesn’t try to make something, anything, in particular happen. She doesn’t even fully score her music, because she wants the musicians to make it different, their own, an accurate reflection of the moment, each time. Throughout her career, she has demonstrated a remarkable lack of ego, most notably in encouraging her listeners/lookers/readers to find whatever they want, not what she wants.

Around the same time I first heard Ono, I happened upon a book of Zen koans at the library. At Protestant Sunday school I had been admonished, “Who are you to question the Lord?” So it was hard at first for me to believe that Buddhism really did want me to ask questions, much less decide for myself which answers I believed. Similarly, in my blue-collar upbringing it was accepted, about any art, film, or music that did not conform to formula, “That’s not art!”

It amazes me to realize now that in the thousand or so times I’ve been interviewed in the nearly thirty years since then, I’ve never once mentioned Zen Buddhism’s catalytic role in the performance art, “unlistenable” music, and “unwatchable” short films I went on to create. What Zen did was remind me to gently ask, “It’s not?” when everyone around me was saying, “That’s not real music you’re making” or “That’s not a real marriage” (my husband and I lived in separate countries more often than we did the same one) or just, “That’s not how people live!” (Like, with no furniture in one of my apartments.)

Buddhism whispered, “It’s not?” in my ear and supported my every crazy endeavor. Ono did, too, as I began to read about her unorthodox views on family, women, work. She almost never brought Buddhism up either, though its that’s-not-a-wall-that’s-a-door-why-not-walk-through-it? influence is apparent in just about everything she does.

At seventeen, I moved to California and at nineteen, I moved to Paris. I sought out any goes-too-far weirdo looking to destroy the current order so they could create, if just for an hour at a show, a new world. As I got to know some of these artists, I realized we all came out of abusive and frightening childhoods, occasional forced psychiatric “care,” hypocritical relationships to religion and status, and lots of sexual exploitation and substance abuse.

In short, nothing was as it seemed. With our art, we tried to remove all the “seemed” and spotlight instead the chaos and the ugliness hidden beneath. Some of us did shock operas on stage. We said, and showed, what one doesn’t, shouldn’t, can’t. What we were aiming for, crudely, was to elicit that split-second realization that anything is possible, that anything you were told may be a lie, and that anything you haven’t thought of yet may be the truth.

We wanted to shake things up. For us, peace had to come through violence. Emotional, social, intellectual violence would do. It was our native language. We’d never had serenity, so how were we going to learn it from serene art or literature or relationships? Those things were unrecognizable to us. They didn’t look real. Gentleness had to be explained to us in the language we already knew, which was a rough one. If you come from a world of repressed and hidden hate, the next step isn’t necessarily to love. Instead, it’s to expose the hate that has always been there, to meet it face-to-face and come to love it, or love it inside you. Then you love you. Then you just love. That’s how messed-up people do it, from what I’ve seen.

William Burroughs, that murdering junkie, was a big influence for a lot of us. He said, “We must learn by acting, experiencing, and living; that is, above all, by Love and Suffering. A man who uses Buddhism or any other instrument to remove love from his being in order to avoid suffering has committed, in my mind, a sacrilege comparable to castration. You were given the power to love in order to use it, no matter what pain it may cause you.”

For me, public speaking is pain, because I have stage fright. But in my mind, for an audience to have to sit through the reading of something already written, often years earlier, is like diners being force-fed already digested meals. So I try to come up with something interactive when I tour in support of my books. For my book on Yoko Ono, Reaching Out with No Hands, I traveled up the West Coast attempting what may have been the world’s first conceptual-art cover band. The audience and I reenacted some of Yoko’s pieces, or “instructional poems”—as made famous in her 1964 book, Grapefruit, whose sequel, Acorn, appeared just last year—along with her film Up Your Legs Forever.

She bashed her head really hard into the wall, slowly and deliberately, maybe five times. She looked all starry-eyed after and she was smiling. She said, “That felt good.” I’d never hit a wall with my head, either. This wall was cement. I touched my forehead to it hesitantly. Then harder. It did feel good! It felt concentrated. I felt everything right there at the top of my face and nowhere else in my body, as if all sensation had drained upward. It was cool. I had a tender feeling; I felt fragility. Most of the time you don’t feel your head and face. You see out of them, so you can’t see them—only images or reflections of them. We have such a floaty life, gelatinous. If there is no boundary between self and universe, as some practices or philosophies conclude, then what do we even have these bodies for? The sudden contact of head to wall delineates it. It is a uniquely satisfying sensation.

Next, a Harvard-educated attorney said, “I’ll do it.” That was a precious brain she was bashing! Her boyfriend said, “No, thank you. I’m good” and remained in the semi-dark on the club’s couch with his un-throbbing head. It was like any other night for him.

Up and down California on that tour, people hit their heads, “watched” a choreographed dance in total darkness, and walked on treadmills naked. Or didn’t—and had the experience of being the one who would not take off their clothes, and having that feeling.

Some remarked that it was their first time being naked as an adult around other adults without having sex. It’s kind of strange how steadfastly we cling to covering. We spend so much money and time and heartache focusing on this body, changing it, starving it, operating on it. We hide and abuse it, allowing our shame to keep us from simple things we feel like doing, like go swimming or dance funny, because someone might get a glimpse of us, of our underneath; someone might not like this body. But who are these someones?

When people got naked on my “Ono covers” tour, nothing happened. Nobody reacted. I was really curious and wanted to ask the naked people what it felt like, how they saw it. I’m a journalist and I probe. But Yoko never does that, so I never did that, all tour long. It hurt me to not ask.

Finally, at the next-to-last show, I realized that asking others about their experience, their perceptions, was how I protect myself from immersion (and fear of drowning) in my own. Journalism had provided me with the sensation of being in control of the situation; if I was feeding on and exploiting information, that meant I must not be filling the only other role I’d known: that of the exploited.

That winter in California, forced by my own choosing out of what was comfortable for me, I got to experience what it feels like to stay in my own skin. It felt pretty cool. Thank you, Yoko.