The eight heavy rules are the result of historical and social circumstances, explains Buddhist scholar Janet Gyatso—and times have changed. Equal status is critical, not only for those directly affected but also for the future of Buddhism in the West. 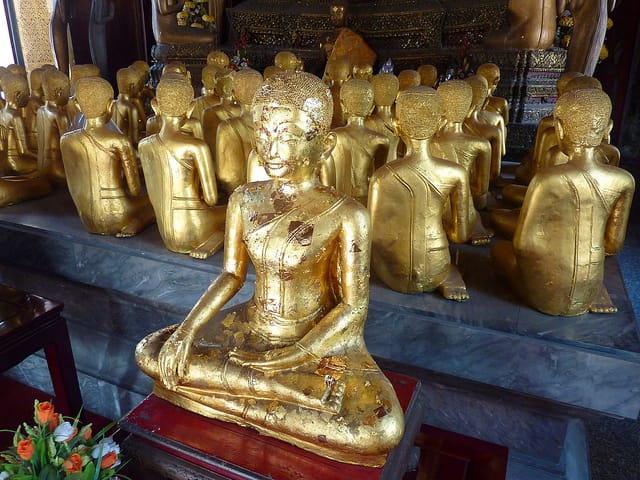 It is crucial to develop an intentional stance on the famous eight heavy rules, the provisions that institute patriarchy in Buddhist monasticism and upon which the Buddha supposedly insisted before granting women permission to take ordination. An explicit position on the status of these eight provisions today needs to be articulated publicly. Leaders of the Buddhist sangha—male and female alike—need to address and acknowledge them clearly, and specify how they are to be handled in the twenty-first century. The contingencies of our current world context require the formation of such an intentional position.

Some in the current Buddhist sangha, in Asia as well as the West, would like to disavow the eight heavy rules altogether. Recall, they require the unconditional deference by all nuns to all monks, regardless of merit or seniority; they call for the supervision of nuns’ living arrangements and ritual procedures by monks; and they prohibit nuns from reviling or admonishing monks, while explicitly permitting monks to admonish nuns. The eight heavy rules provision is a key part in the defining story of women’s original acceptance into the Buddhist monastic order.

While this enshrinement of patriarchy in the rules of bhikshunis is unfortunate and damaging, it poses a recalcitrant problem. We cannot easily write it out of the Vinaya. Not only is the story included in all versions of the Vinaya, but all of the eight provisions save one have been incorporated into the pratimoksha governing the nuns’ rules of behavior and punishments for their infractions. They are intricately woven into monastic ritual and tradition; simply to wipe them out would entail so many changes that it might be difficult to claim that the new female order was indeed the same as the bhikshuni tradition known from historical Buddhism. A similar question has long been debated in other religions, and especially in Christianity: is there a way to accommodate and reinterpret elements of one’s tradition that are patriarchal and/or androcentric, if not misogynist, or is it necessary to change the tradition radically, or even abandon it entirely? This complex debate is likely to develop among Buddhists too, unfolding gradually with different ramifications in different contexts. But it would be unfortunate to allow it to derail the quest by Buddhist women to reestablish the order in its traditional form. I would suggest that it be treated with restraint for now.

That is not to say that the eight heavy rules can be left in place without comment. They are a liability, not only to the success of the bhikshuni movement but also to Buddhism as a whole. They damage the reputation of Buddhism as a religion of egalitarianism and equanimity. The eight heavy rules imply that in Buddhism, renunciant women are lower in status than men and also not deemed capable of managing their own affairs. Both fly in the face of the broad-based call for sex and gender equality that has been percolating throughout the world for the last century at least.

The eight heavy rules need to be addressed both because of their detrimental impact on the aura of the new bhikshunis and for the harm they do to the reputation of Buddhism among civilized nations everywhere. To do this would not mean that the Buddhist leadership is acquiescing to popular trends and public opinion. Rather, it is essential to realize that image, respect, and prestige underlie the very nature of Buddhist monasticism from the start. The Buddhist sangha was designed precisely as an exemplar of the optimum religious lifestyle. Its survival depends on the generosity of the lay, whose support fluctuates in exact proportion to their conviction that the monastic community is maintaining its purity and the highest standards of behavior and wisdom. Indeed, the eight heavy rules themselves are cast in the story as necessary precisely in order to assuage the concerns of the Buddhist lay community.

The same is true now, except that lay expectations have shifted: There are different sets of concerns in the global lay community. We need to have a public pronouncement stating that in the Buddhist sangha of the twenty-first century, despite the technical inclusion of the eight heavy rules in the Vinaya texts, bhikshus and bhikshunis will be considered to have equal status and prestige, and be subject to the same rules of seniority; there shall be in practice no difference based on sex or gender alone. Buddhist leaders need to affirm that the eight heavy rules had their time and place but their conditions no longer remain. They need to do this to retain the respect and support of the lay Buddhist world.

But just as much, to work for gender equality is simply on the side of what is right. There can be no question that Buddhist doctrine, throughout its history, agrees. The patriarchy and misogyny that we do find in Buddhist sources is to be attributed to historical and social circumstances rather than reasoned or ethical principle. There is never a principled argument for gender inequality in Buddhist literature.

The Buddhist sangha needs to lead its own communities in fostering the best path, the best values—indeed, as it has always endeavored to do. The best path and the best values in the world favor gender equality and the elimination of patriarchy and misogyny. What is more, it is critical to the success of the bhikshuni sangha that they have no shadows, no grounds to disparage their prestige and status; hence the necessity to confront and deal with the eight heavy rules.

One way to counteract the shadow cast by the eight heavy rules would be for the male sangha to deliberately and overtly show their respect for bhikshunis. Monks should go out of their way to display their respect for nuns at every opportunity, to put them on a high chair and to treat them as equals. Along these lines, it was extraordinary to hear the Dalai Lama proclaim in Hamburg that feminism is wonderful and important, celebrating the strong talents that women have for modeling Buddhist values. Hearing such an intentional statement of support from a figure like the Dalai Lama helps women to hold their heads high in the Buddhist world. Such support will help redress and reverse the prejudice that women have endured over the centuries in Buddhism. In particular, displays of such esteem toward bhikshunis by monks could be cast explicitly as a deliberate attempt on the part of the Buddhist sangha to show that it regards the eight heavy rules only as an archaic relic from a previous period in Buddhist history.

It is crucial to repeat again that prestige and status are essential to the success of the Buddhist sangha. It would be a grave mistake to conflate concerns about prestige and reputation with the kinds of problems of ego that Buddhism always warns us against. Regard and respect is at the bottom of the entire system of the Buddhist sangha; it is essential for the support of the laity, and that support is essential for the sangha to survive. It is a mistaken sense of the ascetic path to think that the bhikshuni sangha can operate without proper facilities and resources. Without such support the bhikshuni sangha will experience a second decline.

Those contemporary Buddhist women who have argued that the eight heavy rules should not be contested but rather regarded as providing a good opportunity for women to work on their egos are pursuing a mistaken strategy. Although it is certainly true that the situation is a good chance to work on one’s ego—most situations are!—we should hardly welcome the disparagement of an order whose entire purpose is to provide models of dignity and discipline.

From Dignity and Discipline, edited by Thea Mohr and Jampa Tsedroen, published by Wisdom Publications, reprinted with permission.

Janet Gyatso is the Hershey Professor of Buddhist Studies at Harvard University’s Divinity School, and author of Apparitions of the Self and Women in Tibet. She is past president of the International Association of Tibetan Studies and the current co-chair of the Buddhism Section of the American Academy of Religion.