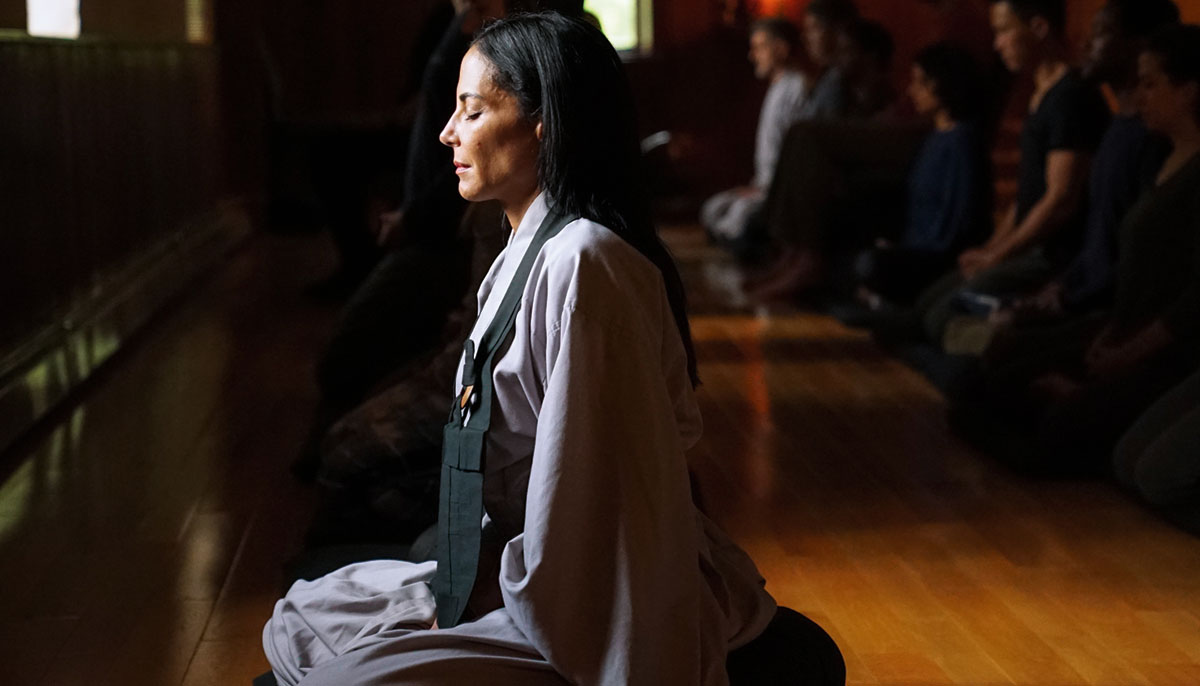 The Buddha’s most detailed teaching on the practice of mindfulness is found in the famed Satipatthana Sutta, “The Discourse on the Foundations of Mindfulness.”

The Buddha opens this discourse by declaring that the four foundations of mindfulness are the “one-way path” for the overcoming of suffering and the attainment of nirvana. The expression “four foundations of mindfulness” refers to the mindful contemplation of four objective domains that, between them, comprise the entire field of human experience: the body, feelings, states of mind, and dhammas, a term I leave untranslated.

With regard to each contemplation, the text tells us that the practitioner dwells “ardent, clearly comprehending, and mindful, having put away longing and dejection concerning the world.” These terms indicate that the practice involves not only mindfulness, but the coming together of mindfulness, energy, and discernment, coupled with detachment from the claims of the mundane world.

Of the four applications of mindfulness, the contemplation of the body is concerned with the material side of existence, the middle two with the mental side, and the last with the exploration of experience in ways reflecting the goal of the teaching. The four unfold in a definite sequence, starting with the body as the coarsest and culminating in the last, which is the subtlest.

First Foundation: Contemplation of the Body

Contemplation of the body (kayanupassana) is said to comprise fourteen exercises, but since the last nine are mere variations on a single principle, these effectively amount to six.

The first is mindfulness of breathing. This was the meditation subject the Buddha himself used on the night of his enlightenment, and throughout his teaching career he praised it as “an unadulterated blissful abiding that banishes unwholesome thoughts as soon as they arise.”

To undertake this practice, one puts the natural process of respiration under the lens of mindful observation. Breathing naturally through the nostrils, one focuses on the breath at the point around the nostrils or upper lip where the air can be felt moving in and out. The key to the entire practice is succinctly expressed in the Buddha’s statement: “Just mindful one breathes in, mindful one breathes out.” The awareness of breath cuts through the complexities of discursive thinking, pulling us back from mental meandering and anchoring the mind securely in the present.

The awareness of breath cuts through the complexities of discursive thinking, pulling us back from mental meandering and anchoring the mind securely in the present.

According to the sutta, mindfulness of breathing unfolds in four stages. In the first two stages, one simply observes the inhalations and exhalations by way of duration, noting whether they are long or short. At the third stage, along with in-and-out breathing, one experiences the body in its entirety. And in the fourth stage, one “calms the bodily function,” letting the breath and other bodily functions gradually quiet down until they become extremely subtle.

The next practice in contemplation of the body is mindfulness of the postures, which extends mindfulness to all postures: walking, standing, sitting, and lying down, and to the change from one posture to another. When walking one knows that one is walking, when standing that one is standing, when sitting that one is sitting, when lying down that one is lying down. Contemplation of the postures illuminates the impersonal nature of the body, revealing it to be a configuration of living matter subject to the directing influence of volition.

The next exercise, called mindfulness and clear comprehension, applies mindfulness to the diverse activities of daily life. When performing any action, one knows exactly what one is doing and why one is doing it. In this way such ordinary actions as going out and coming back, looking ahead and looking aside, bending and stretching the limbs, dressing, eating, drinking, urinating, defecating, falling asleep, waking up, speaking, and remaining silent all become part of the process of meditative cultivation. Everyday life itself becomes full-bodied practice and the practice becomes fully embodied in everyday life.

The next two exercises in mindfulness of the body are analytical contemplations of the body’s real nature. The first is the meditation on the body’s unattractiveness, proposed as the direct antidote to sensual lust. The Buddha teaches that lust arises and proliferates through the perception of the body as sensually alluring. To counteract lust, we look deeply into the body’s anatomical constitution, mentally dissecting the body—our own body—into its components to bring to light its unattractive nature. The texts mention thirty-two bodily parts, which include various organs, tissues, and bodily fluids. When these are seen with the eye of meditative vision, the body’s lovely appearance dissolves and sensual lust, left without a foothold, withers away.

The other analytical contemplation is meditation on the four physical elements. This aims to counter our innate tendency to identify with the body by exposing its impersonal nature. In this practice we mentally dissect the body into its four primary elements, referred to as earth, water, fire, and air, representing the four properties of solidity, fluidity, heat, and pressure. Having analyzed the body into the four elements, one then considers that all the elements are essentially identical with their external counterparts. This shows that the body is nothing more than a particular constellation of changing material processes, without any substantial basis for the notions of “I” and “mine.”

The last exercise in mindfulness of the body is a series of nine charnel ground contemplations, meditations on the body’s disintegration after death. This can be practiced imaginatively or with the aid of pictures. One obtains a clear mental image of a decomposing body in nine stages and then applies the process of decay to one’s own body, reflecting: “This body, too, is subject to the same fate. It too must eventually decompose.” The aim, though, is not to incite a morbid fascination with death and corpses, but to sunder our instinctive clinging to the body by exposing its inexorable transience.

The next foundation of mindfulness is contemplation of feeling (vedananupassana). The word “feeling” here does not refer to emotion but to the bare affective tone of experience, whether pleasant, painful, or neutral.

Feeling is of special importance as an object of contemplation because it serves as fodder for the latent defilements. Pleasant feeling nourishes greed and attachment, painful feeling provokes aversion, and neutral feeling sustains delusion, manifesting as apathy and complacency.

The link between feelings and the defilements, however, is not inevitable but can be severed by bringing the feelings that arise into the range of mindfulness. Turning a feeling into an object of mindfulness defuses the feeling so that it doesn’t trigger an unwholesome response but is instead seen as merely an impersonal factor of experience.

In the early stages of the contemplation of feeling, one simply observes the distinct qualities of the feelings as pleasant, painful, or neutral. One sees feeling as a bare mental event shorn of all subjective references, all pointers to an “I” that experiences the feeling. As practice advances, one distinguishes whether the feeling is worldly, tending to attachment, or spiritual, tending to detachment. In time the focus of attention shifts from the tone of the feelings to the process of feeling itself, which is revealed to be a ceaseless flux of feelings arising and dissolving, one after another without a pause. This marks the beginning of insight into impermanence, which, as it evolves, overturns greed for pleasant feelings, aversion for painful feelings, and delusion over neutral feelings. 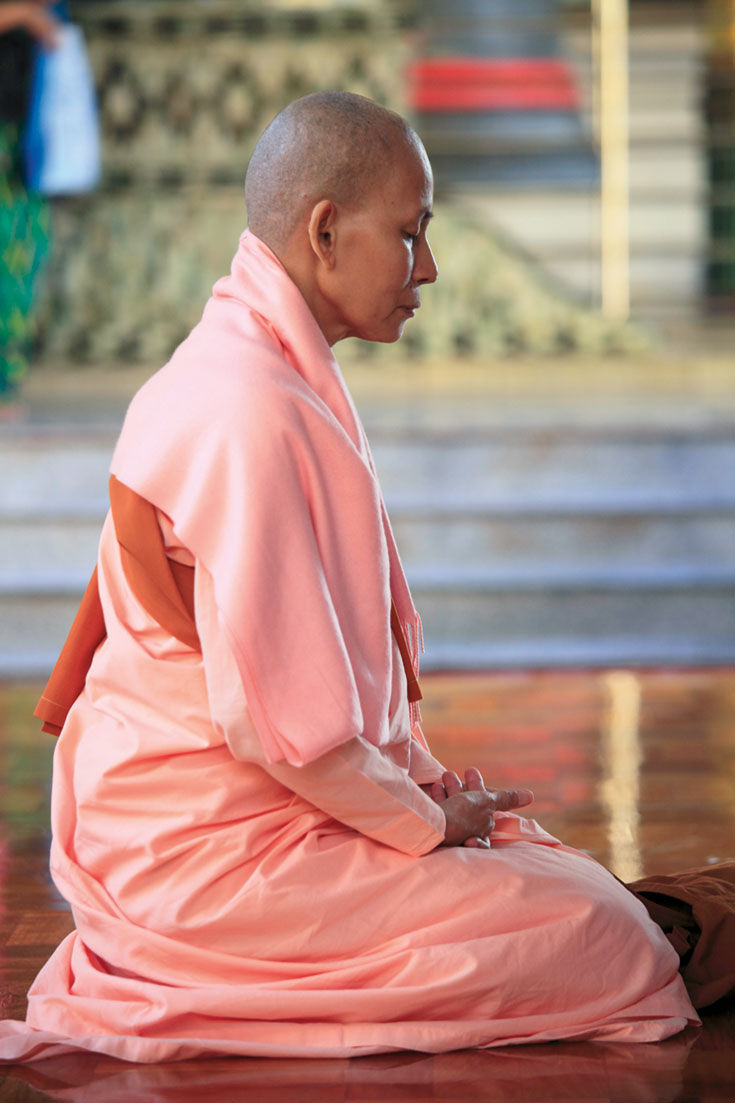 The third foundation of mindfulness is contemplation of mind (cittanupassana), which actually means observation of states of mind. Since mind in itself is just the bare awareness of an object, states of mind can only be distinguished through their associated factors, which give them their distinctive coloring.

For practical purposes it is sufficient at the outset to focus on the first six states, observing whether the mind is associated with any of the three unwholesome roots or is free from them. When a particular state of mind is present, it is noted merely as a state of mind, not identified as “I” or “mine.” Whether it is a pure state or a defiled state, a lofty state or a low state, there should be no elation or dejection, only a clear identification of the state, without clinging to the desired ones or resenting the undesired ones. As contemplation deepens, the seemingly solid, stable mind reveals itself to be a stream of mental acts flashing in and out of being, coming from nowhere and going nowhere, continuing in sequence without pause.

The final foundation of mindfulness is contemplation of dhammas (dhammanupassana). Here the word “dhammas” refers to groups of phenomena organized in ways that reflect the goal of the Buddha’s teaching. The five groups mentioned in the sutta are: the five hindrances, the five aggregates (skandhas), the six pairs of sense bases, the seven factors of enlightenment, and the four noble truths.

When the hindrances subside, we then proceed to investigate the field of experience. This can be undertaken through either of two complementary objects of contemplation. One is the five aggregates, the objective domain of clinging: material form, feeling, perception, volitional activities, and consciousness. The other is the six sense bases, arranged in pairs of sense faculty and object: the eye and visible forms, the ear and sounds, the nose and odors, the tongue and tastes, the body and tactile objects, and the mind and mental objects. These are to be directly noted, together with any attachment or aversion that arise through the encounter of sense faculty with object. One is to discern how these “fetters” arise, how they are abandoned, and how they are permanently eliminated.

The two schemes organize experience from different angles. The six sense bases give priority to the domain of cognition, the sensory sphere in which experience unfolds. The five aggregates lay bare the constituent factors of experience, with greater attention to the mental components.

As the process of contemplation proceeds, it brings into play the seven factors of enlightenment: mindfulness, investigation of phenomena, energy, rapture, tranquility, concentration, and equanimity. When any one of these factors arises, its presence should first be noted, and then one should see how that factor can be aroused and how it can be brought to fulfillment.

The seven factors unfold in sequence. Mindfulness initiates the contemplative process. Stable mindfulness gives rise to investigation, the probing quality of intelligence. Investigation calls forth energy, energy generates rapture, rapture leads to tranquility, tranquility to concentration, and concentration to equanimity. The whole evolving course of practice leading to enlightenment thus begins with mindfulness, which remains constant throughout as the regulating power ensuring that the mind is clear, cognizant, and balanced.

Finally, when the seven factors of enlightenment reach maturity, they blossom in the direct realization of the four noble truths: the truths of suffering, its origin, its cessation, and the path. It is this realization, the penetration of the four truths, that permanently uproots the defilements and brings the extinction of suffering. This fulfills the Buddha’s promise at the opening of the discourse, his declaration that these four foundations of mindfulness lead in one direction: toward the full purification of beings, the ending of sorrow and grief, and the realization of nirvana.