Meet the Silicon Valley data scientist who is using the example of the Buddha to help Americans rethink their relationship to food. 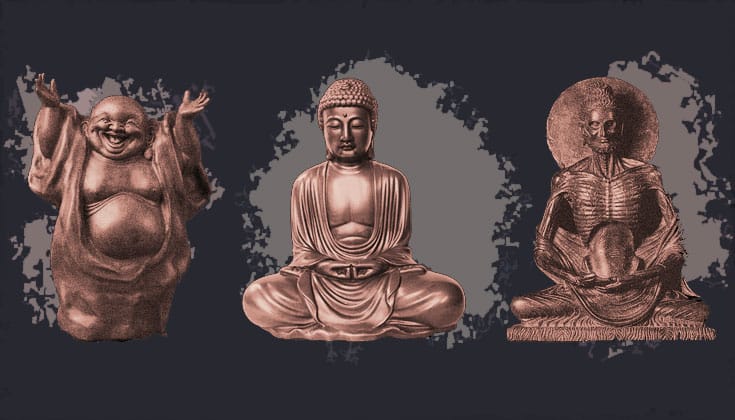 Statues of Hotei, the Buddha in meditation, and the Buddha as an ascetic before his enlightenment.

Many people think of the Buddha as fat. Others picture him emaciated and sickly. In truth, Siddhartha Gautama, the historical Buddha, was quite trim — and for one simple reason: he dieted.

Dan Zigmond, a Zen priest and the data scientist who runs Facebook’s newsfeed, thinks we could learn a lot from the Buddha’s diet.

“The essence of the diet can be explained in a single sentence,” says Zigmond. “Buddha’s diet involves eating in certain hours during the day and then not eating at all after those hours.”

That’s actually how the Buddha ate. And, in his eight rules for lay followers, he asked that they “not eat at night or at an improper time.” To his monastic followers, he explained,

Zigmond has updated the Buddha’s rules on eating for modern (and not necessarily Buddhist) lifestyles in his new book, Buddha’s Diet (reviewed in the January 2017 issue of Lion’s Roar). He suggests eating during only nine hours in a day; outside of those hours, you can drink water, tea, and coffee. Zigmond himself eats between roughly 9am and 6pm each day — a habit he picked up when living at a temple in Thailand.

Until recently, Zen, data, and food were three completely separate interests for Zigmond. He taught himself to code when he was young. In college, he got interested in Buddhism and started meditating. Recently, he worked at Hampton Creek, a company known for producing vegan version of mayonnaise. While he worked there, Zigmond discovered new research about intermittent fasting.

“Here I was, a data scientist at a food company, reading about a diet that was reminiscent of Buddhist teachings. That was really the moment all these three things came together.”

Zigmond left Hampton Creek and spent nine months reviewing scientific papers, researching sutras, and writing. Out of the work came Buddha’s Diet — co-authored with Tara Cotrell — and the diet for which it is named.

“We tried to bring all of these elements together — the science, the data, the Buddhist teachings — and some real practical advice about eating and changing our relationship to food,” says Zigmond. 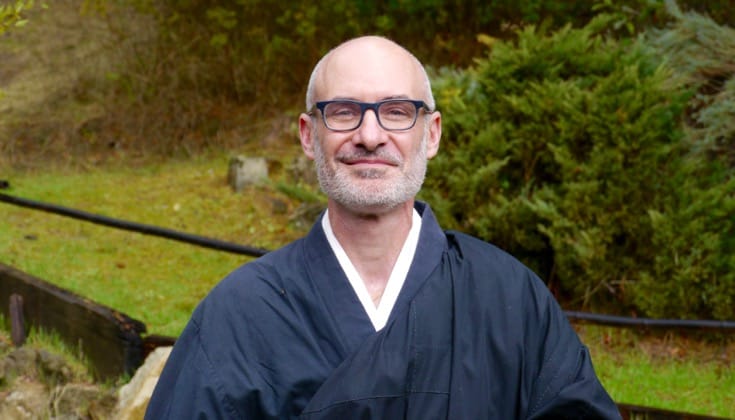 Depending on who is reading it, Buddha’s Diet could be seen as a book of Buddhist teachings or a book on dieting. Zigmond says the book’s dual purposes arose naturally out of the interplay between modern science and the Buddha’s teachings.

“Buddha himself cared a lot about data,” he says. “These days I think we would think of him as a biohacker — someone who was experimenting on himself to try and understand the human condition.”

An eating schedule may seem like a peculiar preoccupation for an enlightened teacher, and indeed, to understand the Buddha’s diet, context is key. In ancient India, fasting was a popular spiritual practice. Prior to his enlightenment, the Buddha himself experimented with asceticism — the practice of trying to conquer the body by starving oneself. Those practices contrasted sharply against the Buddha’s early palace life, wherein he lived in abundance, food included.

“You can see this diet approach as a middle way. It’s not fasting, and it’s not living in complete abundance. It’s consistent with the Buddha’s general theme of finding the middle way between extremes,” explains Zigmond. “One extreme is the round-the-clock eating that most of us do today. The other extreme is the severe fasting that he had tried and found so unwholesome.”

Science agrees with Zigmond and the Buddha. Half of Americans eat throughout their waking hours. Experiments on mice show that if you let them do the same, they’ll get obese. But if you let them eat as much as they want within a nine-hour period each day, they won’t gain weight.

“That period of fasting provides some protection against obesity,” says Zigmond. “If you’re overweight it can help you lose weight, and if you’re not it can help you maintain a healthy body weight.

“When we overwork our metabolism, it starts to fail. That failure is part of why we start overproducing fat and gaining weight.”

For Zigmond, dieting isn’t about getting a beach body. It’s about helping others and encouraging them to be mindful. His book is divided into four parts. The final section is largely about how to incorporate mindfulness and Buddhist teachings into eating habits and daily life.

“As Buddhists, we all take a vow to help alleviate suffering. My hope is that this book can help everybody have a healthier relationship to food.”

Buddha’s Diet might even address a blind spot for Buddhists, who might not include eating in their idea of practice. “To not talk about food and eating does a disservice,” says Zigmond. “Many of us are suffering in our relationship to food and our bodies. I think that we owe it to ourselves to talk about how Buddhist teachings apply.”