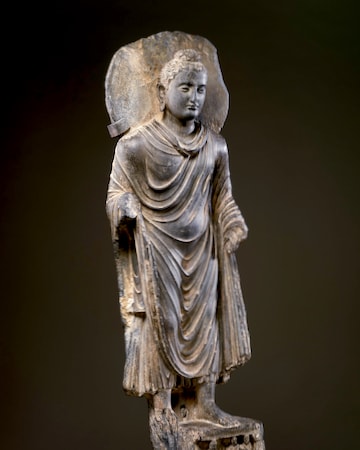 Randy Rosenthal talks to scholar Glenn Wallis about his thought-provoking new book A Critique of Western Buddhism: Ruins of the Buddhist Real.

Glenn Wallis’s new book A Critique of Western Buddhism: Ruins of the Buddhist Real may be disturbing, if not infuriating, to anyone who considers themself Buddhist. For forty-plus years, Wallis has been “actively surveying the Buddhist landscape.” With a Ph.D. in Buddhist Studies from Harvard, he’s a scholar and translator of Pali, Sanskrit, and Tibetan texts. He’s also studied with ajahns in Thailand, rinpoches in the Himalayas, and roshis in Japan. Yet, he doesn’t wear robes or call himself a dharma teacher, or even a Buddhist. This is in part because, after everything, Wallis has concluded that Western Buddhism must get ruined.

“Ruin” is the keyword in Wallis’s new book (it’s also the name of the punk band that Wallis co-founded in 1980). As he says below, it doesn’t refer to destruction or annihilation. In his usage, it describes a return to an unkempt state. Wallis argues that Western Buddhism has been diffused through Enlightenment, Romantic, and Protestant thinking. It claims ancient legitimacy while ignoring aspects of the early Buddhist scriptures — such as stories of the Buddha’s supernatural powers and the teachings on rebirth. Today, the Buddha is depicted as an empirically-minded scientist. These and other doctrinal alterations, argues Wallis, represent the troubling upkeep of Buddhism’s facade. In order to maintain itself as an institution within the consumerist capitalist framework in which it operates, says Wallis, “Buddhism” must package and market itself. In doing so, he contends that Buddhism negates the very teachings it aims to convey.

Wallis says he is not trying to recapture some pristine pre-Western Buddhism, nor is he advocating a return to Buddhist orthodoxy. Yet “the history of Western Buddhism,” he writes, “is one of evading the consequences of its own thought.” Fundamentally, we struggle to accept Buddhism’s most fundamental truths, such as suffering and non-self.

Wallis is an anti-establishment thinker with threads of anarchism. That’s clear when he outlines his cure for Western Buddhism’s problems: get rid of capital-B “Buddhism” and invite humans to discover what feels true for themselves, rather than adhere to something external. Wallis calls this ideology “non-buddhism,” after the philosopher Francois Laurelle’s idea of “non-philosophy.” Wallis argues that if we “ruin” the edifices of Western Buddhism, then we can work with the profound teachings that remain. He hopes his view could stimulate some deep thinking.

A Critique of Western Buddhism is not written for a general audience, and as such it is intellectually dense. Reading his book, I found myself at times frustrated, stimulated, confused, and inspired. I spoke with Wallis to better understand what he means.

Randy Rosenthal: In the introduction to your book, you argue that “Western Buddhism must be ruined.” What do you mean?

Glenn Wallis: It’s obviously provocative to say Buddhism must be ruined, but it’s not what people think. It doesn’t mean you need to annihilate this and be done with it.

A ruin is not annihilated structure. It is transformed. It is returned to its natural condition. It’s still a beautiful, profound structure that is uplifting and inspiring. It no longer functions as a place of commerce or bureaucracy. That’s the idea of a ruin.

Western Buddhism must be radicalized — stripped of the pretension, of the principle of “sufficient Buddhism.” It just becomes raw cultural material that human beings can work with.

An important idea in your book is “sufficiency.” What do you mean when you use that word?

The principle of sufficient Buddhism says simply that in the end it must be the Buddhist idea that prevails. It must prevail over other forms of knowledge that might be better in the situation. Some people apply this thinking to addiction theory, saying that everything you need to understand about addiction is in the Buddhist teaching of the Four Noble Truths.

Buddhist institutions operate as edifices to protect the Buddhist sufficiency. If you take away the principle of sufficiency, all of a sudden Buddhism doesn’t seem to necessarily have the goods. All these other forms of knowledge appear — biology, psychology — and then Buddhism comes into dialogue with them.

And this leads to your concept of non-buddhism. What is “non-buddhism”?

Non-buddhism is simply Buddhism minus the principle of sufficiency. It’s not anti-Buddhism, it’s not a not-Buddhism. It’s not an un-Buddhism. It’s a Buddhism inscribed by this lack of sufficiency. It’s Buddhist material that offers resources for human beings who are trying to navigate life. You could apply it to anything, so long as you leave out the sufficient imperative that I think Buddhist teachers operate under — the idea that Buddhism has all the goods, that it doesn’t have to be placed in dialogue with other forms of thought.

If Buddhism or Buddhist practice is helping someone — say, a child with ADHD — do you think there’s something wrong with that?

If it works, it works because of human biology, human psychology. My grandmother always used to say “be mindful of the time.” That’s just a basic awareness we can all generate. If I find that mindfulness meditation or any other kind of meditation works, it’s because of the constitution of the human being. But in Buddhism and spiritual traditions, they encode that simple human practice with extraordinarily complex ideologies, postulates upon postulates upon postulates, hidden value upon hidden value upon hidden value, unstated assumptions about the state of the person and possibilities in the world.

My mother had back pain. I taught her some basic meditation, minus all sorts of Buddhist postulates about what it was doing or could do. That’s a pivot point: one version is a simple human practice of attending to your breath; the other is an idealist Buddhist meditation — “the Buddha did it, and it leads to this or that wonderful result.” You find yourself ensnared in this complex network of all-too cumbersome, over-determining Buddhist postulates.

So you’re saying that what needs to be ruined is the ideological narrative around meditation?

Absolutely. As long as my desire is captured by that formation, I become the preformed subject of a kind of spiritualized bureaucratic system. Buddhism makes all kinds of claims — like a lot of systems do — on the person’s identity. What you should be. What emotions are good. What are not. What ways of being are good. What are not.

Buddhism is so unbelievably interesting because it has all of these “first names of the real,” as Laruelle would call them. The Real is a sort of a priori that all these different religious and philosophical and spiritual traditions are trying to get us to in some way — either to realize or to fuse with. It’s a powerful element of human thought in Taoism, Confucianism — we see it in early Plato, in the pre-Socratics. Sometimes it’s called the “Real.” Sometimes it’s called the “One.” More often it’s called some other word altogether, like the “Tao,” or the “Truth.” It’s the notion that there is a really essential, important something that stands prior to our language and conceptualizations of self and existence.

Buddhism has tons of names for it, like emptiness, no self, dependent origination. It’s something that stands prior to and is unaffected by human language.

Pain and suffering is a human real. Buddhists say suffering-desire is inextricably woven into the nature of existence. It flows through life like water. That is the idea of a Real. That is the idea of an indestructible kernel at the heart of existence. Pain is a Real. Impermanence is a Real. Death. These are profound truths about the nature of human existence. And we can’t operate on them. We can’t operate on death. We can only construct fantasies about what happens afterwards. But we can’t replace the actual fact of the Real of death — the disappearance, the return into inorganic matter.

You’ve seen a dead person lying there, right? They’re gone! That’s what we know. But we can hallucinate all kinds of things about them – fantasies about rebirth and other realms, which we have no experience of. That’s the critique: these guys keep starting off with a beautiful, powerful Buddhist “first name for the Real,” but they invariably go through the process of circling back around to come up against that raw human Real.

What are we to make of Western Buddhism?

This is the frustrating part of non-buddhism. You can’t say what to make of it. Saying what it might be is to start all over again with the harassment of a system — to harass you by saying what your life should be like. The non- is about the elimination of harassment. You lay out the materials. You do interesting things with it. But it can never be prescribed. The criticism of systems of thought is that they’re too prescriptive.

The One is ultimately the individual. There’s a profound sense of each individual having to make a life for him or herself, free to the greatest extent possible from harassing systems of thought.