There are two ways to understand dependent origination, teaches Ajahn Buddhadasa. But only one leads to liberation. 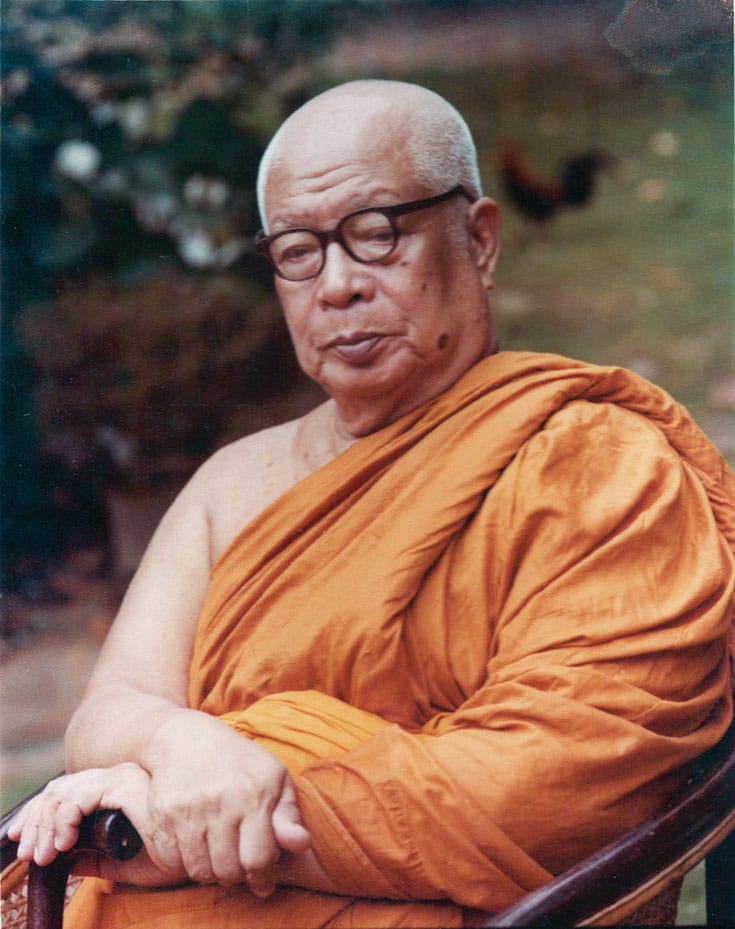 In the Pali suttas there are two descriptions of what occurred under the Bodhi tree at the time of the Buddha’s great awakening. In one version, appearing in various texts, the Buddha realized the three supreme knowledges. In the first true knowing, as it is generally understood, he recollected his former lives. In this account, as tradition­ally understood, he is able to recall his own previous births far into the distant past. These are invariably described as happening to the same per­son. In the second true knowing, he reviewed how beings carry on accord­ing to their actions (cutupapatañana), how beings pass away and reappear according to the karma they have done. Through the third true knowing, he realized the destruction of the impulses (asavakkhyañana). The out-flow­ing fermentations (asavas) are the deepest level of defilement; when they are completely ended, no further defilement, egoism, or suffering is possi­ble. This is the more commonly recounted description of the night of the Buddha’s awakening.

Between these two versions, the second is more reasonable and accept­able in light of the overall themes and threads of the Pali suttas. In the other account, the first knowledge concerning the recollection of past lives is in the language of eternalism, just as in the pre-Buddhist Upanishads, which speak of a self or an individual being born again and again over many lives. The belief that the same person is repeatedly reborn is eternalism, which Buddhism aims to eliminate. This idea has more in common with popular beliefs and the philosophy of the Upanishads than with the core of the Buddha’s message.

At heart, Buddhism teaches the end of karma, living beyond karma, rather than carrying on according to karma.

The second knowledge is about beings passing away and reappearing according to karma. This is generally understood to mean that the same being disappears from one existence (bhava) and reappears in another according to karmic influences somehow carried over from one existence to the next. However, this is not directly or specifically a Buddhist teaching. At heart, Buddhism teaches the end of karma, living beyond karma, rather than carrying on according to karma. The noble path is for freedom from karma; living under the sway of karma is limiting, distressful, and burdensome. It is not good enough to merely sur­render to karma, to die and be reborn according to the fruits of our actions. In Buddhism, liberating insight must go further than that.

Neither of these first two knowledges can be considered truly Buddhist principles. Why, then, are they included in the Pali scriptures? My own view is that perhaps the compilers of the discourses included these pas­sages for the benefit of ordinary people. For those people unable to understand dependent co-arising and the end of karma, these passages were included for the sake of morality. Consequently, this is an account of the Buddha’s awak­ening for the moral benefit of ordinary people.

Please consider this important question: Have you ever practiced like this? Have you ever investigated dependent co-arising in the way that the Buddha did before, during, and after his awakening? We suggest that you examine and scrutinize dependent co-arising in the same great detail, with the same sincerity and intensity. Then, you might understand it like he did. You will find it worth your while to follow the Buddha’s example. 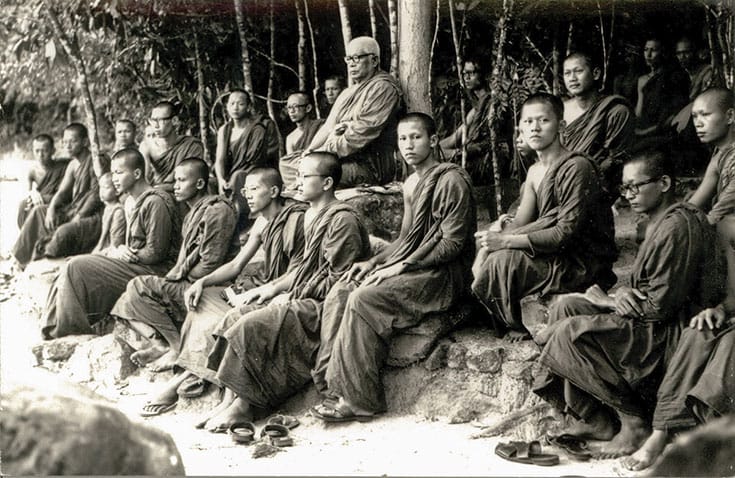 This is a good place to consider karma. After all, it parallels the dependent co-arising teaching, though with less precision and depth. In the first account of the Buddha’s awaken­ing, the second knowledge suggests that beings carry on after death according to their karma. The difficulty with this understanding is that we cannot take this as the understanding of karma in line with core Buddhist principles. Rather, this understand­ing is simply the standard version of karma that existed in India before the Buddha’s time. Before the Buddha’s awakening, the Upanishads already taught that beings are reborn after death according to the workings of karma. Even Christianity, at least mainstream forms, teaches pretty much the same. If that is not the true Buddhist teaching, then what is?

In Buddhism, the central teaching on karma is about the practice that makes karma meaningless, “the karma that ends karma.” This karma trans­forms us beyond all the influences of karma, which is the unique, more pro­found aspect of the Buddha’s karma teaching. The idea that doing good deeds leads to good results and doing bad deeds leads to bad results was a general teaching that existed before the Buddha’s time. The Buddha did not deny or object to such karma doctrines, which were already common before he appeared and are found in some form in all religions. However, such teachings were not sufficient for his purpose: the end of suffering. Therefore, the Buddha went further. His real teaching is about not being trapped by karma, thus transcending karma and its consequences.

To be trapped forever in the prison of karma is not Buddhism. If everything constantly happens to us according to karma, there could never be any liberation.

Allow me to reiterate that most of the books on Buddhism with chapters on “Karma and Rebirth” are not correct, not if they really intend to represent Buddhism. If we are to explain “Karma in Buddhism,” it is not enough to teach that good actions bring good fruits, bad actions bring bad fruits, and we inevitably receive the fruits of our good and bad karma. Properly, a Buddhist explanation must focus on “the karma that ends all karma.” The practice of the noble eightfold path is that karma that ends all karma. The Buddha’s teaching on karma is to be free of karma, not trapped by it, so that karma has no more power over our lives.

The Buddha Perfected the Teaching of Karma

To be trapped forever in the prison of karma is not Buddhism. If every­thing constantly happens to us according to karma, there could never be any liberation. For a teaching and practice to be Buddhism, we must be liberated from the power and oppression of karma. A teaching that merely reiterates the old approach cannot be the true Buddhist teaching. It must be completed to the extent of liberation to be Buddhism. Thus, the Buddha needed to teach the karma that ends karma. He took the kind of karma that does not explain liberation and perfected it so that liberation from karma became the central point.

“Beyond karma” is a teaching above and beyond the world, or a lokuttara teaching. The ordinary karma teachings are part and parcel with the world (lokiya). Lokiyadhamma is for the mind still trapped in worldly conditions. Lokuttaradhamma is for the mind free of and beyond worldly conditions. The Buddha accepted a number of the old teachings, perfecting them within his lokuttaradhamma system as he did so. The Buddhist teaching on karma—the noble eightfold path that ends karma—is a perfect example of how the Buddha completed the old teachings and traditions.

The Buddha accepted some teachings that existed in India before his awakening, such as non-vengeance (avera), non-harming or nonviolence (avihimsa), the five sila, various samadhi practices, and the form and formless jhanas. All of these are older teachings and practices that he did not reject. Instead, he further developed, completed, and perfected them. Please be aware that Buddhism contains a certain amount of older teachings and practices that the Buddha included, deepened, and completed for the sake of quenching dukkha. Understand­ing this fact is important so that we will not confuse the old versions of such teachings with the new, perfected versions.

The Buddha completed the Upanishadic teaching on karma and the like. To do so, he taught the end of karma.

These examples clearly show that there are two levels of teaching, both of which are necessary. One is for the sake of morality, for those who still believe in and hold to self. The moral level of teaching is necessary for those who can only understand things in terms of me and mine, who require moral and therapeutic teachings that operate on a worldly level. It teaches people how to live in the world morally and peacefully, to be less selfish about the selves to which they cling, and thereby suffer less.

You can continue rebirthing yourself in a worldly way, but with healthy morality, not harming others and living relatively peacefully.

For those aiming higher, the Buddha’s teaching focuses on letting go of self, that everything is not-self and nothing is worth clinging to as me or mine. This level does not ignore or reject the moral teachings; it simply goes beyond them. This is the more comprehensive transcendent level of ultimate truth that truly liberates from all suffer­ing. If both levels are understood, there is no conflict between them. They can coexist for the sake of both those who want to live in and of the world (lokiya) and those aiming to live above and free of the world (lokuttara), in it but not of it.

Each person decides their own preference and way. If you want to travel the paths of the world and have no wish to transcend the world, you can fol­low the worldly teachings and receive the moralistic explanation of depen­dent co-arising given by various commentators. You can continue rebirthing yourself in a worldly way, but with healthy morality, not harming others and living relatively peacefully. If you want to be free, to transcend the world and no longer be caught by all its trappings, you must study the transcen­dent teachings such as “the end of karma” that do not involve self. For this, we have the dependent co-arising of ultimate truth that enables us to see through all the concoctings of self. Dependent co-arising also has these two levels or two models. The choice of which to follow is yours.

AAdapted from Under the Bodhi Tree, from Wisdom Publications, 2017.

Ajahn Buddhadasa (1906–93) was one of Thailand's most influential Buddhist teachers. In 1932 he founded Suan Mokkhablarama, the first modern forest monastery in Thailand. His work would eventually inspire a new generation of socially concerned individuals both in Thailand and throughout the world.