His Holiness The Dalai Lama and the late Archbishop Desmond Tutu (who passed away on Sunday, December 26) were two of the world’s best-known spiritual leaders, and dear, dear friends as well. It was a friendship rooted in a shared sense of joy, and of purpose: to foster and spread that joy around the globe, in order to address and counter its despair. Here, from The Book of Joy, their book with Douglas Abrams, we get an inside look at this one-of-a-kind spiritual friendship. 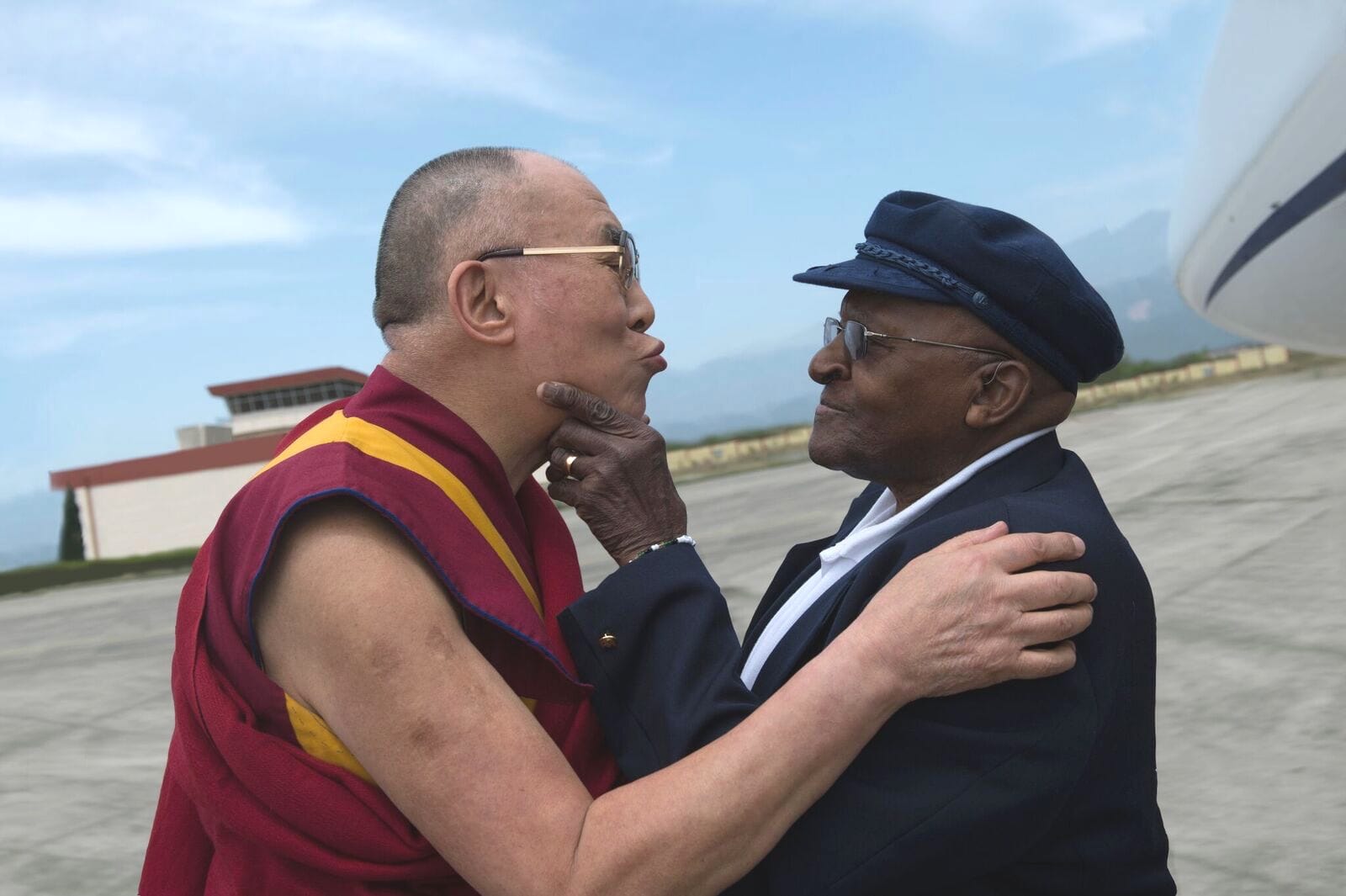 The Dalai Lama said, “I was very sad to miss your birthday. When I found out that you might come here, I was really surprised. I knew your health was not good and that you were also very old, and to reach here is not easy.”

“But,” the Dalai Lama continued, “when I heard that everything was finalized and the date and hour was approaching I really felt happy and excited.  I really appreciate your friendship and your sense of responsibility to do what you can for a better humanity.”

Earlier in the week, the Archbishop and the Dalai Lama had reflected on what was so special about their friendship with characteristic humor.

“He’s always teasing me,” the Archbishop laughed. “Almost the first time we met—do you remember? Maybe the first time you were a little reserved, but by the second time you were taking my cap off my head. I don’t know that you wake up in the morning and say I’m going to become a friend to the Dalai Lama.  It just happens. Scientists will come afterwards and analyze it. But I don’t think that he woke up either—at three—and said, “I think I’m going to be friends with that large-nosed black man from Africa.  I think it was a communication of the heart. When we kept quiet, our hearts discovered that they were kindred spirits.

The Dalai Lama erupted into a belly laugh and then began pointing at the Archbishop. “His face, his face,” he said, gesturing to the Archbishop’s bald head. “He looks like a monk now, doesn’t he?”

“I admire him enormously. Oh, he’s going to get proud. But I always say to people, after being in exile over 50 years how many would show the same serenity, the same joy, and the eagerness to spread goodness and compassion in the world.

“I think I would be very sulky, and I think there’d be a part of me that was always sad and it would show in my face. It doesn’t in his.  I mean I’m just saying, he is there for us as a beacon to tell us that you can, in fact, overcome some of the most horrendous circumstances, and, and emerge on the other side, not broken. So he is a very great gift to the world. And maybe the Chinese, without intending it, have given the world a wonderful gift.

“Thank you,” the Dalai Lama said quietly, perhaps humbled by the praise.

“Pay me, pay me,” the Archbishop said.

“I will pay. I will pay with a few nice words.”

He was holding the Archbishop’s arm. “And then, you see, once you connect on the human level, you become close friends and that friendship never changes.  But on another level, this person is a very funny person,” he said slapping his arm playfully. “I love that. He is always teasing me, and also I am teasing him. So, we really become something quite special.

“And finally, right from the beginning, you always speak out about the truth and the justice of the Tibetan cause. As a Tibetan, I very much appreciate.

“You are a monk, remember?” the Archbishop scolded.

“But when you are not there, something missing, really. Really, really. The other Nobel laureates also feel that, I think. So the relationship is something unique and something very special.”

“Thank you. I paid him,” the Archbishop said, as if pretending to stage whisper. 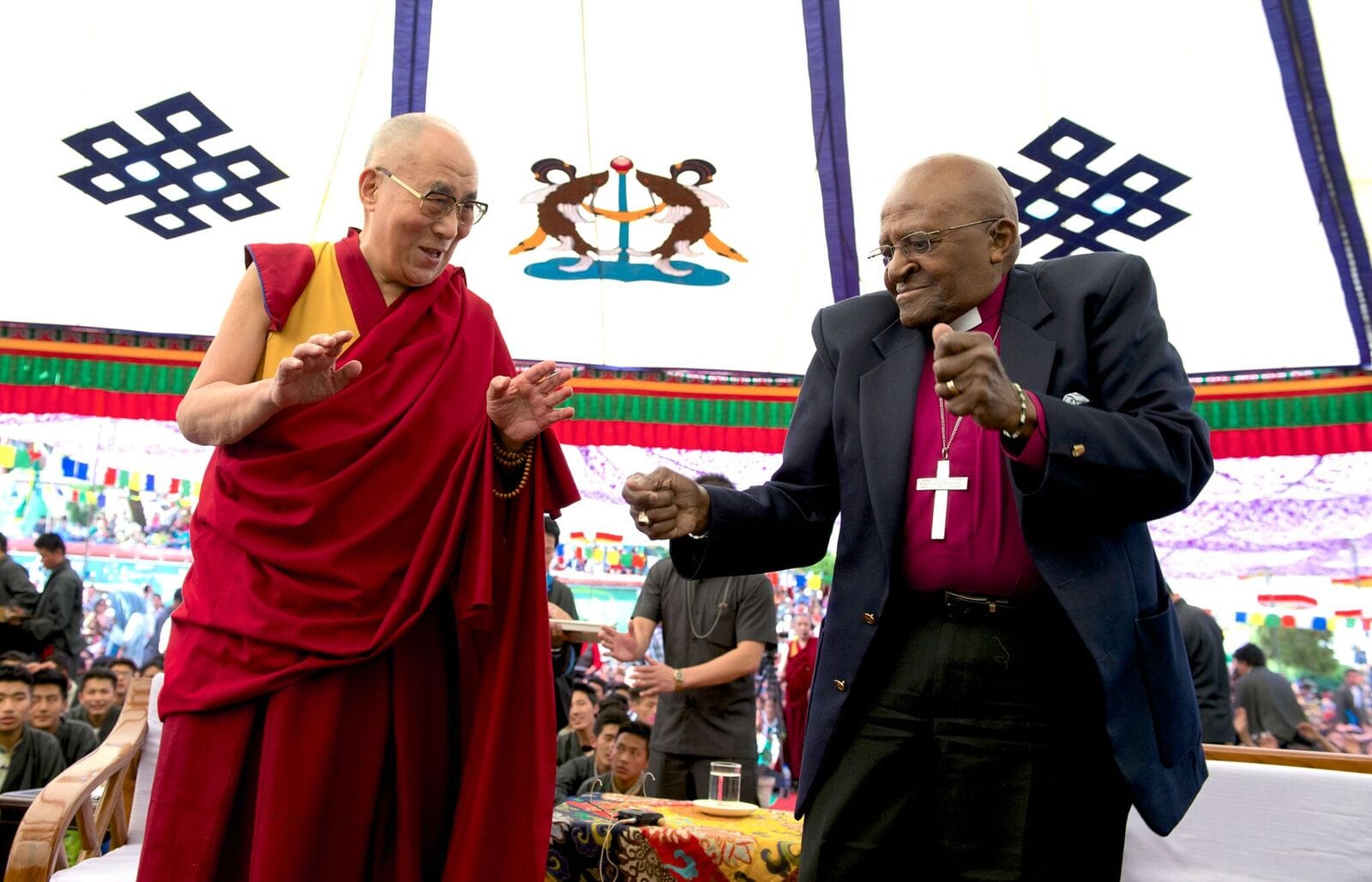 Dancing at a celebration of His Holiness’s 80th birthday. Photo by Tenzin Choejor.

The Dalai Lama erupted into a belly laugh and then began pointing at the Archbishop. “His face, his face,” he said, gesturing to the Archbishop’s bald head. “He looks like a monk now, doesn’t he?” Then the Dalai Lama drew his hand into the shape of an eye.  “When I see your eyes—” Then he squeezed his nose playfully, “—and, of course, your nose—”

The Archbishop could not help but giggle at the mention of his nose.

Then the Dalai Lama’s playful tone changed, as he pointed at the Archbishop’s face warmly.  “This picture, special picture.”  Then he paused. “I think, at time of my death…” The word death hung in the air, his words a prophecy. “…I will remember you.”

I could hear everyone in the room, even the camera operators, gasp. The Archbishop looked down and hummed deeply, obviously humbled and moved by the Dalai Lama’s words. Could there be a truer sign of love: to see another’s face at the time of death.

“Thank you.  Thank you,” was all the Archbishop could say, all that could be said.

“So perhaps,” the Dalai Lama said, “according to your religious tradition, we may meet in heaven in the presence of God. You as a good Christian practitioner, you go first.” The Archbishop now chuckled heartily and the room seemed to breathe again. “You may help me and bring us together.” We laughed imagining the Archbishop bargaining with St. Peter at the pearly gates trying get special admission for the Dalai Lama.

“But from the Buddhist viewpoint,” the Dalai Lama continued, “once in a life, you develop some sort of special close connection, then that sort of impact will carry life after life. That’s Buddhist viewpoint. So maybe even then. But now, I’m looking forward to another occasion to see you again—somewhere that only God knows.”

Reprinted from The Book of Joy by arrangement with Avery Books, a member of Penguin Group (USA) LLC, A Penguin Random House Company. Copyright © 2016, The Dalai Lama Trust, Desmond Tutu, and Douglas Abrams

Desmond Tutu, recipient of the Nobel Peace Prize in 1984, retired as Archbishop of Capetown, South Africa, in 1996. He is active as a lecturer throughout the world and was recently a visiting professor at Emory University in Atlanta.

Douglas Abrams is the founder and president of Idea Architects, a creative book and media agency helping visionaries to create a wiser, healthier, and more just word. He is also the co-founder with Pam Omidyar and Desmond Tutu of HumanJourney.com, a public benefit company working to share life- and world-changing ideas. He lives in Santa Cruz, California.