According to Zen priest Gesshin Greenwood, NBC’s The Good Place shows us people are good because of their bond to each other — even in the afterlife. 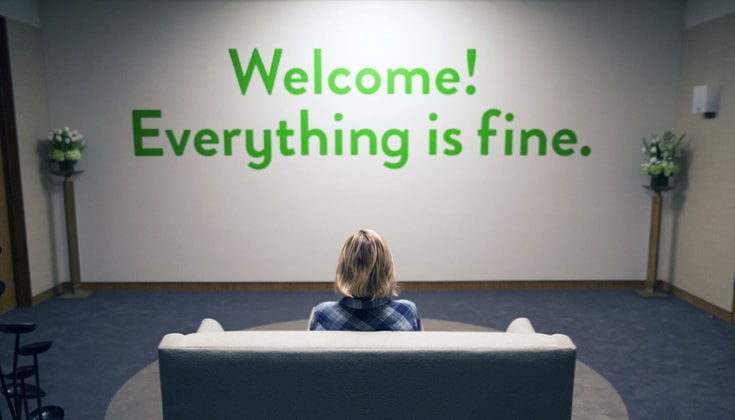 Eleanor Shellstrop is dead. In the first episode of The Good Place, she finds herself in what appears to be heaven. But Eleanor quickly realizes there has been a mistake—there is no way she was supposed to end up here. When alive, she wasn’t exactly a “good person” (after a slight insult, she posts her cousin’s credit card information on Reddit, for example). In order to save her immortal soul, she enlists the help of Chidi, a former moral philosophy professor, to teach her how to be good.

How the administrators of The Good Place evaluate humans while they are alive mirrors the Buddhist concept of merit, as humans receive points for every good deed they’ve done on earth. For example, “politely tolerating a stranger recounting a New Yorker article at a cocktail party” grants you points, whereas “telling a woman to smile” or “rooting for the New York Yankees” earns you demerits. Chidi’s main lesson for Eleanor is that “being good” means making others happy, which is a crucial component of Buddhist ethics (the three pure precepts in Zen are “do no evil, do good, and actualize good for others”).

Perhaps the biggest Buddhist message of The Good Place is that we should be good not for some cosmic reward, but because of our inherent connection with humanity.

Other Buddhist concepts are sprinkled throughout the show’s two seasons (Season 3 premiered this week). When attempting to teach a demon how to care about humanity, Eleanor and Chidi realize that without a concept of one’s own mortality, there can be no ethical growth. “All humans are aware of death,” Eleanor explains to the demon, “so we’re all kind of sad all the time.” Once the demon confronts his mortality, he can begin to care for others.

The importance of being aware of death is echoed in most Buddhist traditions, such as the practice of meditating in graveyards and charnel grounds. Zen literature also puts a premium on the awareness of death. It is said that Dogen Zenji, the thirteenth-century founder of Soto Zen, resolved to become a monk after seeing the smoke rise from his mother’s funeral pyre. Perhaps the biggest Buddhist message of The Good Place is that we should be good not for some cosmic reward, but because of our inherent connection with humanity, much like Chögyam Trungpa’s concept of “basic goodness.” Eleanor and the other human characters on the show learn to become good people because of their bonds with each other.

Chidi’s positive influence on Eleanor is reminiscent of the Buddha’s famous teaching that “spiritual friends are the whole of the spiritual life.” Indeed, where would we be without teachers and fellow travelers?

As Zen teacher James Ford writes, “In the spiritual life, nowhere do our ideals meet the actual more truly than in how we relate to each other, in how we make, sustain, and are friends.” In the final episode of season two, Chidi says something similar, pointing to the human connectivity that underlies morality: “At the intersection of empathy and ethics is the realization that we are not in this alone.”