The practice of mindfulness allows us to become more aware and less reactive in unsettling times, says Lisa Bennett. She shares how she rediscovered its grounding, life-giving quality in the face of uncertainty. 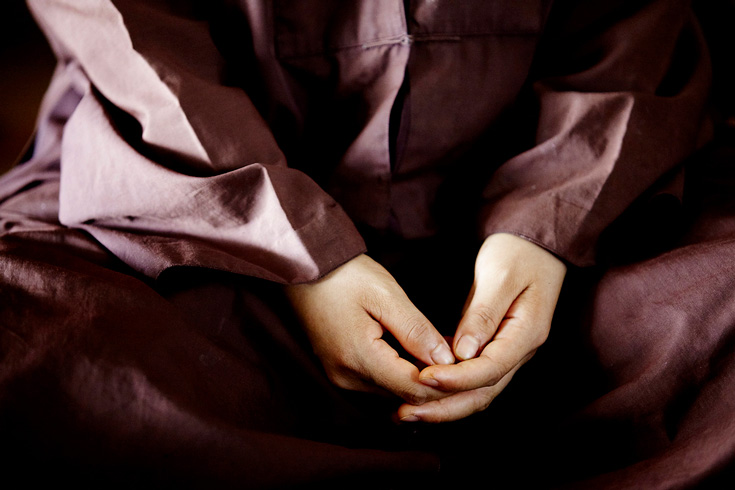 I woke at 3 a.m. the other night, as I’ve often done in the turmoil of these past many months, and scrolled YouTube for something soothing to help me fall back to sleep. I stumbled upon a conversation with the Vietnamese Buddhist teacher, Thich Nhat Hanh, and noticed that his retreat center, Plum Village, has an app. I downloaded it and listened to a few of his talks, as well as one by Sister Dang Nghiem about using a meditation bell. She said it saved her life.

The theme of three talks I listened to was mindfulness — the simple, profound practice of becoming aware and truly present in the moment — and how it is only when we do so that we can experience the joy of being alive.

I’ve heard this idea many times before, but hearing it that night was different, largely because I heard it in the context of the profoundly disruptive times we are now experiencing. The beautiful images of Plum Village in the video were a great contrast to the images we’ve see daily: police killing George Floyd; peaceful protestors being tear-gassed; thousands of people putting their own health and lives at risk in the midst of a global pandemic that has, as of this moment, already killed over 128,000 people in this country.

None of the great spiritual leaders I know of actually separated themselves from the struggles of their time.

As Sister Dang Nghiem spoke, her presence served as a powerful reminder of the exceptional quality of being, deep caring, and equanimity that we humans are capable of. I briefly fantasized about how lovely it would be to live life in a place like Plum Village — as if serious spiritual practitioners somehow wall themselves off from the sufferings of the world.

But none of the great spiritual leaders I know of actually separated themselves from the struggles of their time. Thich Nhat Hanh led protests against the war in his home country of Vietnam. Marin Luther King, Jr., gave his life to the Black civil rights movement. Mahatma Ghandhi led the struggle for Indian independence from Britain. Today, Roshi Joan Halifax, like many other engaged Buddhist leaders, dedicates herself to helping the dying and others who are suffering in our world. What makes great leaders is not freedom from struggle but their wise, skillful, and immensely grounded approach to it.

The fact that these great leaders found and find their grounding in spirituality seems a little incongruous at first. People so often think of spirituality as not of this world. But this I know: At the most difficult times in my life, it has been spirituality — a Buddhist teaching, an impulse to pray, a sense of being connected to something bigger than me — that has helped me through.

So, what now? Throughout the tumult of this year, I have wondered what there is for me to learn from it all. One does not go through times like these, after all, without being reshaped by them. So how, I’ve asked myself, am I being called upon to be changed, and to grow?

My sense was it has had something to do with spirituality. A shift, a deepening, a different kind of commitment. But I wasn’t sure of anything beyond that. Then I heard Sister Dang Nghiem, speaking of mindfulness, say with a sweet smile: “It takes discipline.”

As a child, I routinely heard my father insist upon the importance of discipline, yet I could see he was a deeply unhappy person. If that was what discipline got you, I wanted none of it. It seemed like a straightjacket that squeezed all the joy out of life. I reacted by following what interested me, in this moment, and this one, and this one, like a puppy tracking smells through the woods.

As an adult, I’ve had to develop a kind of discipline. I even came to see the benefits of it, being an ambitious, hard-working and curious person with responsibilities not only to myself but my children. I learned that discipline is essential to achievement. Still, I have had my ongoing struggles. I’ve equated discipline with organization, routine, to-do lists, and schedules. These all have given me a momentary sense of order and direction, but ultimately haven’t kept my attention.

What I now realize is that, for someone like me, a disciplined approach to a predetermined goal will always feel, at least in part, life-sapping, because it is. When the outcome is fixed, even if only in my mind, poof, there goes the aliveness of it. It may keep me going for a while, but sooner or later my energy will dissipate, or, life will deliver a wallop of a surprise. Today a pandemic, tomorrow civil unrest, here to interfere with all our plans.

I now see that cultivating discipline for a practice such as mindfulness is life-giving because it engages me in the work of becoming more aware, less reactive, more capable of love, with no fixed end in sight. It is a dedication to a process that can help me become what I am capable of becoming in the context of life as I find it. It offers a way to feel more grounded when so much is up in the air. And for that recognition, I am immensely grateful to have been awoken in the dark.

Lisa Bennett is a longtime writer who co-authored a book with emotional intelligence expert Daniel Goleman, contributed to The Compassionate Instinct, and edited Women Amplified. Learn more at www.lisabennett.net