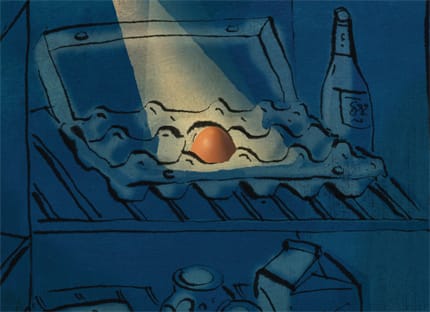 All he wanted was an egg. Instead Sam Guthrie got a close-up look at his compulsive need for order.

When I was seventeen, I would wake up at 4:30 in the morning and put on my ripped black jeans, drab olive T-shirt, blocky engineer boots, and black leather jacket bristling with punk rock safety pins. Then I’d stagger out of my cluttered studio apartment, get on my motorcycle, and ride through the dark, silent Minneapolis streets to the Minnesota Zen Meditation Center, where I’d sit like a statue in meditation until the morning sun poured through the windows and made blazing yellow rectangles on the hardwood floors.

I’d been reading books on Eastern spirituality since I was thirteen, and by the time I was fifteen, I’d come to think of my life as a great quest for enlightenment. And Zen, with its elegance, rigor, and unflinching realism, seemed like the best way to get there. But without knowing it, I was also attracted to Zen for another reason: it was tidy.

The priests at the Zen center wore clean, shiny, bald heads, and their immaculate black robes swished crisply on the gleaming wood floor of the zendo. The stark austerity of Zen was attractive to me because—though I could never have admitted it to myself—beneath my facade of rock and roll recklessness and my messy apartment I was, in a hundred tiny ways, a very fastidious teenager. You just had to know where to look.

I spiked my hair each morning with nearobsessive attention to the symmetry of the spikes. If a friend stuck one of my Lou Reed or Iggy Pop albums in with The Clash and The Stranglers, my stomach would tighten until everybody was gone and I could put the album back in its proper geographical category. When I had sliced banana in my Cheerios, the eating had to be flawlessly modulated so that not a single bite of Cheerios would be left without its own banana slice.

Plainly it was Zen for me.

The only problem was that I felt I was in the wrong kind of Zen. I thought of myself as a wild rebel, and I longed to be in the fiery Rinzai school of Zen. In Rinzai Zen, you meditated fiercely on koans, unsolvable riddles designed to shatter the lumbering conceptual mind to smithereens. I craved dramatic confrontations with the ferocious Rinzai Zen masters I read about, who screamed and smacked you when you answered your koan with the turgid intellect, rather than by a raw, mindless explosion of primal knowing. Rinzai Zen, in short, was punk rock.

Unfortunately, there were no Rinzai Zen masters in quiet Minneapolis, so I was stuck in the Soto school of Zen. In the Soto school, instead of wrestling with koans, you simply sat for vast, geological stretches of time, concentrating on your breath and trying to be in the present moment, something for which I had no talent whatsoever. And, looking back on those days, I suspect that my longing to be in the gonzo world of Rinzai Zen and its mad koans was, deep down, a subterranean urge to have some sort of bull unleashed into the China shop of my anal retentive ways.

Over the next fifteen years I sold my guitars to fund an ignobly brief period of homeless wandering, inspired by Jack Kerouac and various itinerant Zen monks. I had my motorcycle stolen and gave my now purely ornamental black leather jacket to an ex-girlfriend who wore it well with her pink Mohawk. At twenty-eight I married an implausibly sexy novelist, moved into the staid Lowry Hill area of South Minneapolis, and became a high school teacher. Somewhere in there I quit Soto Zen, though I still read books about Zen masters—Ikkyu, Huang Po, Hui Neng—the way other people read suspense novels. And somehow, throughout all that time, I was able to remain blind to all my little neurotic eccentricities of order and tidiness.

You’d think that if you could hide idiosyncrasies from your friends, you must know you have them. But that’s the ineluctable mystery of blind spots. They are impossible little miracles of mental compartmentalization. And you never know where that thing that cracks the hard shell of a blind spot will come from. In my case, it came from my refrigerator.

Although I was now thirty-two, I still kept up the pretense of being a loose, rock and roll guy. My appearance was toned down to a subtle nod to punk rock. My old Levis sported vaguely Ramones-esque holes in the knees. I still kept my hair slightly choppy. And, of course, my home was still cluttered. Mine was, after all, an oddly selective species of fastidiousness.

But one morning, as I made a smoothie, I opened the egg carton and was stopped cold by something I’d seen many times but had never noticed until that moment. It was the chaotic way my wife had taken eggs from the carton. There were two empty egg spaces over near the left side in the rear row, one at the far right in the front row and one nearer the middle in the back row. It was a masterpiece of carefree disorder. And for some reason, it suddenly shined a glaring spotlight on my own approach to the eggs.

I always removed the eggs from the carton in a precise, balanced fashion. I began on the far ends of the rows and worked my way in. Or maybe, in an especially jaunty mood, I might’ve ventured four from the middle and worked out, contra-laterally. But now, in contrast to my wife’s insouciant egg grabbing, I felt suddenly ashamed of my meticulous ways.

I blinked at the orderly little piles of ingredients lined up before me on the counter. Celery, beets, kale, goji berries. And then the awful realization started to seep into my awareness: it wasn’t just the eggs. My fastidious ways were everywhere.

I saw how I always had to leave the paper towel roll just slightly unfurled, so the next sheet could be easily grabbed. And how I underlined in my books with Euclidean perfection—the smallest slip of the pen vexed me inordinately. When approaching our home, I had my front-door key out and ready a half a block away, whereas it never seemed to occur to my wife that she would need her key until the door materialized directly in front of her, inexplicably thwarting her entrance.

Pushing a handful of stiff kale leaves into the blender, I flashed on a memory of submitting a handwriting sample to an analysis booth at the state fair when I was eleven or twelve. A computer did the analysis, and I was crushed by the precision with which the lengthy report ranged over my hidden foibles—my insecurities, my shyness, my overly lush fantasy life. On the drive home I sat silently in the backseat, staring at the cold, clinical descriptions of my flawed personhood.

Now, standing in my kitchen, the main thing I remembered from that cruel report was that I had a fearful nature. And that was it. That’s what lay beneath my fastidiousness, a kind of ambient fear—a primal suspicion that if the wet towel was hung up with a fold in it, or if, say, the bottles of supplements weren’t all turned out on the shelf so their labels showed, the entire universe would spin wildly out of control and collapse into a black hole of madness and chaos.

I sulked with the revelation of my fearful, uptight ways, just as I had that day sitting in the backseat of my parent’s car driving home from the state fair, stomach seething with shame and corn dogs. But I was going to change. I resolved, then and there, before the lone witness of my blender, to become as carefree as I’d always pretended to be, even in the littlest details. Especially in the littlest details.

I began thwarting all of my little compulsions. I recklessly squeezed the toothpaste from the plump middle of the tube, rather than from the bottom up, though it made my stomach harden into a fist. Into my breakfast cereal I sliced my banana in nightmarishly nonuniform chunks. I resisted making my trademark little asterisk before each item I wrote on our grocery shopping list, just scrawling them down, letting them hover unmoored in the whiteness. And, most of all, I deliberately took the eggs from the carton in the most random ways I could, my hand shaking ever so slightly as I did.

But three days into my new endeavor I grew dejected. It was an absurd project. Because I was, of course, doing all this carelessness very carefully. It was artificial anarchy, premeditated chaos. I was just layering a sort of meta-neurosis icin
g over the original neurosis cake. It was a ridiculous strategy that would’ve made a Rinzai Zen master laugh uproariously. Before belting me repeatedly. My situation was hopeless.

What if my very relief was a sign that I’d already failed this koan? On the other hand, who knew what tomorrow would bring? Slowly I drifted off to sleep, knowing only that the riddle of one lone egg waited for me in the cold darkness of the refrigerator, like the bald head of an inscrutable Zen master.

Sam Guthrie is a writer and Buddhist practitioner living in Minneapolis, Minnesota.