A Buddhist practitioner finds that the best way to begin yoga is with a beginner’s mind. 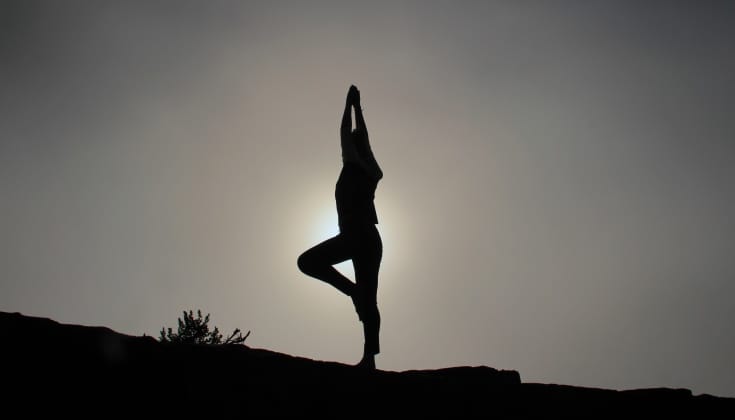 Yoga came to me as if out of a commercial, or maybe a series of commercials. Advertising companies know that a person has to hear about a new product from something like five different directions before desire for that product is kindled. It was like that for me with yoga. All of a sudden, a number of years ago, I began to hear about it wherever I turned, and, although I resisted (thinking that meditation was enough for me), after a while I could ignore it no longer.

First, an exercise instructor I knew started talking about his friend’s newly opened East Village yoga studio, called Jivamukti. My wife went to check it out, but I was not ready to alter my routines. Then my meditation instructors, Sharon Salzberg and Joseph Goldstein, began to make reference to their nascent yoga practices. I took notice because of how much I trust them. Then a yoga teacher named John Friend came to New York and, at Sharon’s suggestion, I signed up for his workshop. He poked good-natured fun at me for being a Buddhist but I liked the extra attention he gave me and felt encouraged. Finally, the dance studio across the street from my office began offering lunchtime yoga classes perfectly timed for my schedule. When my next door neighbor told me how good the classes were, I knew my asana time had arrived.

Yoga came along at the right time for me, or perhaps it was a little bit late. My body had begun to stiffen up after many years of sedentary work as a therapist. I began to be afflicted by strange aches and pains, and meditation did not protect me. But the morning after one of my first yoga classes, I remember walking across the Brooklyn Bridge and marveling at how light and pain-free my body suddenly felt. This downward dog stuff is a miracle, I thought to myself as the East River coursed beneath me.

Years of involvement with Buddhist meditation had inculcated in me a tremendous faith in the wisdom of the East. I was delighted to find that the physical challenges of yoga resonated with me as much as the mental ones of meditation. I liked the sense of working against my own limitations, of benefiting even when I could only barely approximate a given posture. I found that the balance required between effort and surrender in yoga was similar to that in meditation, and this was a balance that intrigued and satisfied me. Yet it turned out I was better protected from myself in meditation than I was in yoga.

There is a saying in Buddhism that emptiness, the key insight of meditation practice, should be regarded as like a snake, because if you do not learn how to hold it properly it will reach up and bite you. Emptiness is the relinquishment of views, said Nagarjuna, but those who do not relinquish the view of emptiness are incurable. Nobody warned me that in yoga a similar caution is necessary. Supremely unaware of this, I reveled in my new-found dexterity.

On a recent visit to my in-laws’ house in Florida, for example, I took the first opportunity to stretch by their pool. After one or two downward dogs, I had a vision of my last yoga class where we successfully worked on our handstands against the wall-adho mukha vrksasana, the face-down tree pose.

“Begin in a downward dog,” I remembered. “Straighten the elbows and stretch the arms, open the chest, walk in, exhale and kick one leg up, following it quickly with the other.” I had discovered that I could kick up without fear, and I loved the feeling of flying up against the wall into a handstand. That would feel nice right now, I thought, and before I knew what was happening, I kicked myself up onto my hands. For a very brief moment, I balanced like a true yogi, but I knew in the next split-second that the snake was about to bite.

My enthusiasm had carried me away. There was no wall to support me and I had lifted off with such energy that I was over and beyond the ability of my arms and shoulders to support me. I had the choice of falling onto the gravel in a somersault or collapsing one shoulder and rolling onto my side. Choosing the latter, I felt my shoulder girdle go into spasm as I fell. Three months later, as I write this, the muscles are still healing.

What is the lesson in all this? For me, it has something to do with letting meditation and yoga help each other. I was so excited to have the help of yoga to my meditation that I forgot to use what I had learned from Buddhism to help me with my yoga. I would never let my excitement over emptiness throw me off balance the way I had let my handstand get out of control. In my enthusiasm for the posture, I had lost-or misplaced-the humility that protected me as I felt my way into yoga in the first place.

The lesson was a familiar one-a lesson that links yoga and meditation at their hearts. The successful practice of yoga, like meditation, requires nothing more, or less, than a beginner’s mind.

Mark Epstein, M.D. is author of Thoughts Without a Thinker and Going to Pieces Without Falling Apart.