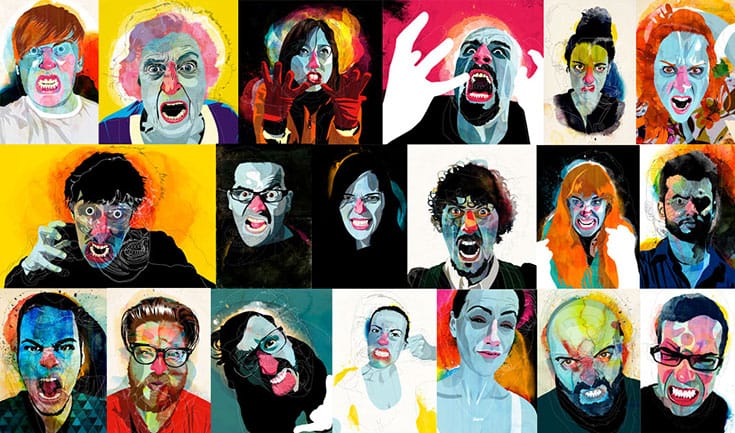 Does spiritual practice mean we can never get angry? No, says Sylvia Boorstein, it’s all how you work with it.

In October 1989, the Dalai Lama sat alone on stage at the largest auditorium on the campus of the University of California at Irvine and answered questions from an audience of more than 6,000 people. It felt like a relaxed conversation in a very large living room. The huge crowd was amazingly quiet, listening intently as he responded carefully to each question. Then someone asked, “Do you ever get angry?”

The Dalai Lama laughed his impish, delighted laugh and said, “Of course! Things happen that I don’t want to happen and anger arises. But, it’s not a problem.”

It seems to me that the most imperishable myth about spiritual practice, especially meditation practice, is that it promises an end to anger once and for all. It doesn’t. When something happens that we don’t want to happen, anger arises. It is the way of the human nervous system. Perhaps it’s one way, through eons of evolution, that human beings have survived. When we feel threatened in any way, anger triggers the adrenaline we need to protect ourselves. The potential of the adult human mind, however, is to recognize anger, locate the fear that gave rise to it, and respond wisely, remedying the situation without complicating it. Anger does not need to be a problem.

It’s understandable that the myth persists. The dharma centers I know are generally quiet. They have a culture of temperate response. I even teach smiling as a practice. It’s a gesture that inclines the mind in the direction of ease, and when smiling is difficult, it alerts the practitioner to the presence of the distress in the mind. I also teach a lot about cultivating the compassionate response of the heart that is our fundamental nature, but still, when things don’t go the way I want them to, anger arises.

Here are questions I often hear asked about anger:

Q. Does cultivating compassion really mean I can never express my anger again?

A. Cultivating compassion doesn’t ever mean you can’t express anger. An unexpressed anger creates a breach in relationships that no amount of smiling can cross. It’s a secret. A lie. The compassionate response is one that keeps connections alive. It requires telling the truth. And telling the truth can be difficult, especially when the mind is stirred up by anger.

The Vinaya, the compendium of monks’ rules in the Pali canon, lists five “Reflections before Admonishing.” Is now a good time to speak? Am I telling the whole truth? Is my voice gentle, not harsh? Am I motivated by kindness? Am I motivated by a desire to be helpful?

I keep a framed card with those five reflections on a table in my study and people often borrow it. I enjoy thinking of the Buddha as a psychotherapist offering advice that is timeless in its relevance.

Q. Surely holding in the anger can’t be good for you. I’ve worked many years in therapy to get in touch with my anger. What should I do now?

A. Getting in touch with one’s anger, if that was formerly a frightening thing to do, is surely a success. It means that we are less hidden to ourselves, more present, more aware of information that could help us respond in ways that could end our suffering. We have the capacity, as adults, to hold in the impulsive, reflexive, often destructive expression of anger and choose instead a clear, useful communication.
Q. What will happen to spontaneity?

A. Spontaneity seems to me the gift and the privilege of firmly established relationships. In my closest connections, those in which mutual love is a complete given, my blurting out, “Where were you? It’s a terrible thing to come home so late and not call. I can’t believe you did that!” will be heard as an expression of my fear, not as a threat.

Q. What will happen to my passion?

A. My experience of angry explosions or smoldering grudges is that they confuse and fatigue my mind and diffuse passion. I think passion comes from seeing clearly. The Buddha taught that choosing wisely in the midst of challenge leads to “clear comprehension of purpose.” I take that to mean lively response powered by resolve. The bodhisattva vow to end suffering in all beings is the most passionate pledge I can imagine.

My reading of the Dalai Lama’s answer about anger not being a problem was that he always managed a wise response. I usually do, and when I don’t, I apologize for not presenting my needs in a more useful form. The first verse of the sixth-century Buddhist commentator Shantideva’s Guide to the Bodhisattva’s Way of Life says that wholesome deeds amassed over eons are erased in one moment of anger. Students sometimes ask, “Do you really believe that?” I say, “I don’t know. It’s certainly inspiring. I pay special attention when I respond angrily so I can discover what frightened me. I feel dismay about the suffering I caused myself and the other person. Since my practice is habituating my heart to kindness, moments of lapse inspire me.”

The morning after the Dalai Lama’s question and answer session in Irvine, the newspapers announced that he had been awarded that year’s Nobel Peace Prize.