Doshin Nathan Woods considers what it means to stand arm in arm as part of our Buddhist practice. From the Spring 2017 issue of Buddhadharma: The Practitioner’s Quarterly. 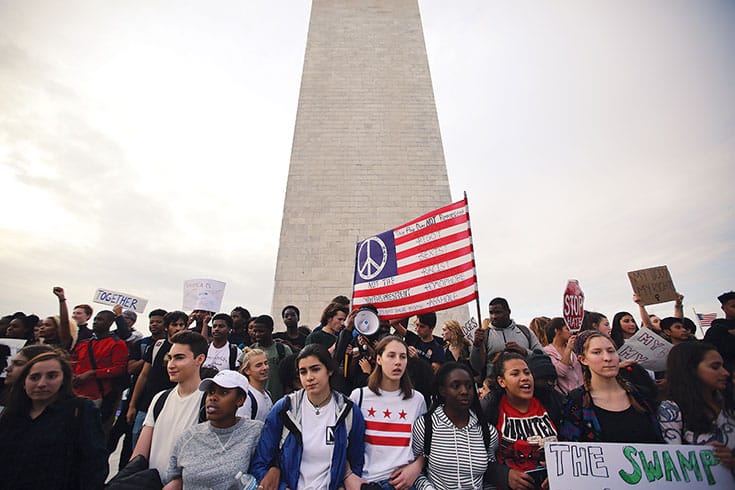 There is a meme I often see these days, at times attributed to Suzuki Roshi or to Aitken Roshi, that runs something like this: “Renunciation is not getting rid of the things of the world but accepting that they pass away.” This points to a view of renunciation whereby things are understood to be empty, without self-definition, and hence without hindrance. In its cultural expression, it speaks, perhaps in a more sentimental way, to the fact that things change.

While the English word “renunciation” conveys a sense of rejection—perhaps a rejection of the world in favor of a divine alternative—in Buddhism, renunciation derives from the Pali word nekkhamma, which involves a letting go of grasping or rejecting. Renunciation in this sense is about living in freedom in the world, rather than rejecting worldly things. The eleventh-century ancestor Atisha points us in the right direction, observing, “The greatest generosity is nonattachment”; here, renunciation means relinquishing self-concept and notions of permanence so that we may embody generosity.

As we move into a new political horizon defined by the election of President Trump and the prospect of continued war, environmental degradation, and growing hostility toward migrants and political minorities, the question is increasingly poignant.

Fortunately, Buddhism offers resources to address the growing inequality and political uncertainty of the present moment. What may be particularly helpful now in guiding us forward can be found in a further expression of the Buddhist view of renunciation—that of solidarity.

How might we express such generosity in these times of uncertainty and change? For many of us, this question lies at the heart of our practice.

Typically defined as a sentiment or expression of mutual support, solidarity can be equally understood as an act of collective or shared responsibility. Solidarity in this sense is expressed in the Buddhist notion of karuna, or “active sympathy,” the conduct of “bearing the pain of others.” Often translated as compassion—suffering with others—karuna is central to all of the Buddhist traditions and involves aspiration, training, and perfection of conduct. While prajna, the wisdom of clear seeing, is a defining feature of the bodhisattva path, it is the embodiment of karuna that defines enlightened activity. Karuna opens one to relationships of collective responsibility and to meaningful expressions of solidarity.

In December 2015, Dr. Larycia Hawkins announced on Facebook her intention to wear a hijab for Advent in an act of “embodied solidarity” with Muslim women. “Muslims and Christians,” Hawkins explained at the time, “share the same god.” Although grounded in important theological reasoning, it was the concern over the uptick of anti-Muslim sentiment that led Hawkins, as a Christian, to wear the hijab. For this, Hawkins, the first African American woman to earn tenure at Wheaton College, was terminated from her position as professor. An outburst of protest followed, along with a spate of critical reflections on how to demonstrate solidarity with the oppressed—in this case, Muslims in a predominantly Christian, and increasingly Islamophobic, society.

Hawkins’ choice of activity is instructive: by wearing the hijab she transformed separation. In so doing, she embodied solidarity, actively sharing in human dignity under conditions of oppression.

The looming sense of political uncertainty and division that haunts our current moment is a symptom of rising global inequality. Everywhere we see increasing deprivation and estrangement, loneliness and isolation, oppression and the amplification of old injustices. It is in this context that we also see the emergence of protests—such as Occupy Wall Street, Black Lives Matters, Standing Rock—that are concerned with enacting visions of human dignity. From across the political spectrum, these movements have been criticized in terms of moral standing and political acumen, but here I’m interested in their visions of collective solidarity. Where, for example, Occupy sought to embody participatory democracy—redistributing authority—in the context of rampant economic and political inequality, Black Lives Matter has attempted to enact, in the present, an aspirational future where the wholeness of Black lives is both embraced and shared. More recently at Standing Rock, we have learned to heed the wisdom of “water is life” and to participate in coalitions directed through indigenous leadership.

Occupy, Black Lives Matter, Standing Rock—all have provided opportunities for us to renew our commitment to the common good and, by sharing how the welfare of the many is defined, to renounce inherited notions of hierarchy and privilege. They have invited us to learn from others and transform suffering through collaboration.

Recently, while attending a symposium on diversity and mindfulness aimed at helping POC and low-income communities access mindfulness-based education, I noticed a marked disconnect in the room. Those representing the community groups weren’t particularly concerned about matters of inclusion but rather wanted to talk about dealing with police and getting support for health care and education. By contrast, those representing the mindfulness organizations focused on inclusion, framed often as delivery of service or making mindfulness leadership training less expensive. What was troubling wasn’t the goals themselves but the way the two groups talked past each other from different assumptions.

During the more informal discussions, this disconnect was further characterized by questions of ally-ship—how might individuals working in mindfulness organizations better serve the community as white allies, for example, or as LGBTQIA allies? This led me to reflect on a concept derived from Liberation Theology—that of “accompaniment,” defined as a long-term “being with” oppressed others through a commitment to equality and resource sharing, often across perceived interests. This pragmatic solidarity, walking with others in their struggle for survival, points to an ethical horizon where, to reference the Zen Peacemaker liturgy, we find opportunity not merely to help but “to see ourselves as Other and Other as ourselves.” In order to move beyond sentiment and express solidarity with others as an embodied relationship, we need to go beyond being allies and explore how we might accompany others in this way.

In order to embody the universal compassion of the bodhisattva, we train in the perfection of generosity, where karuna, as an embodied capacity to suffer with others, manifests as giving.

Accompaniment as a form of solidarity involves siding with the poor, oppressed, and marginalized and accompanying them on their journey, giving what we can and being willing to receive what is given in return in the way of education, training, and conviviality. Buddhists may recognize this as the interrelationship of karuna and dana. In order to embody the universal compassion of the bodhisattva, we train in the perfection of generosity, where karuna, as an embodied capacity to suffer with others, manifests as giving. In the Pali literature, dana is presented as an individual expression of compassion for a shared good. It is a practical manifestation of communal solidarity.

Compassion in Buddhism is also talked about as anukampa, which is sometimes translated literally as a “crying out at the crying out of another.” It is a movement of the heart—often described as a trembling—to act on the behalf of others. Seen in this light, dana defines giving not simply as a contractual exchange but as a spiritual practice where the proper enjoyment and utilization of wealth embodies selflessness and embraces human dignity. It also supports caga, or a generous attitude, loosening one’s grip on possessions and self-benefit.

Solidarity as dana involves sharing our ideas, labor, and time, as well as monetary contributions and creative endeavors. Like accompaniment, it reaches across perceived differences to define new ways of belonging.

Giving, and relationships defined by giving, are central to our received Buddhist traditions and their oral literatures. In Zen meal chants, for example, we find a Mahayana expression characterized, as Shohaku Okumura describes, as a “continuous circle of offerings”; in the act of offering, the distinctions between giver, receiver, and gift fall away. Here, both Buddhist practice and the embodiment of the dharma in our everyday activity are concerned precisely with relationships and collective life shaped by the act of redistribution. Indeed, the Large Sutra on Perfect Wisdom extols: “Do give gifts! For poverty is a painful thing. One is unable, when poor, to accomplish one’s own welfare, much less that of others!” Generosity not only makes the teachings relevant but also defines one’s own spiritual well-being.

If the challenge of this moment is to embrace solidarity by learning new ways of belonging to one another—of suffering with each other—it is made manifest through our acts of sharing. Or, as Shantideva extols in the Bodhisattvacharyavatara, “Since I and other beings both, in wanting happiness, are equal and alike, what difference is there to distinguish us that I should strive to have my bliss alone?”

The first step toward solidarity is to see through our conventional limitations and stand against injustice by listening to the voice of the other crying out.

Today this question is often framed as a matter of justice, with many voices articulating visions for a more just and inclusive society. As Buddhists, we must respond both individually, as a matter of personal practice, and collectively. Together, we can explore ways of training sanghas to share power and resources and to embrace embodied solidarity.

In the months and years to come, we will have plenty of opportunity to participate in new movements of human dignity and redistribution as people step forward to describe their visions of solidarity in the face of injustice. The first step, of course, is to see through our conventional limitations and stand against injustice by listening to the voice of the other crying out. By letting go of who we imagine ourselves to be and cultivating a non-clinging heart, we can learn to accompany each other in an embodied way and live in community—and in dignity—with those with whom we suffer.

Doshin Nathan Woods is a novice Zen priest at Sweetwater Zen Center. He holds a PhD in cultural anthropology and teaches at the University of the West in Rosemead, California.