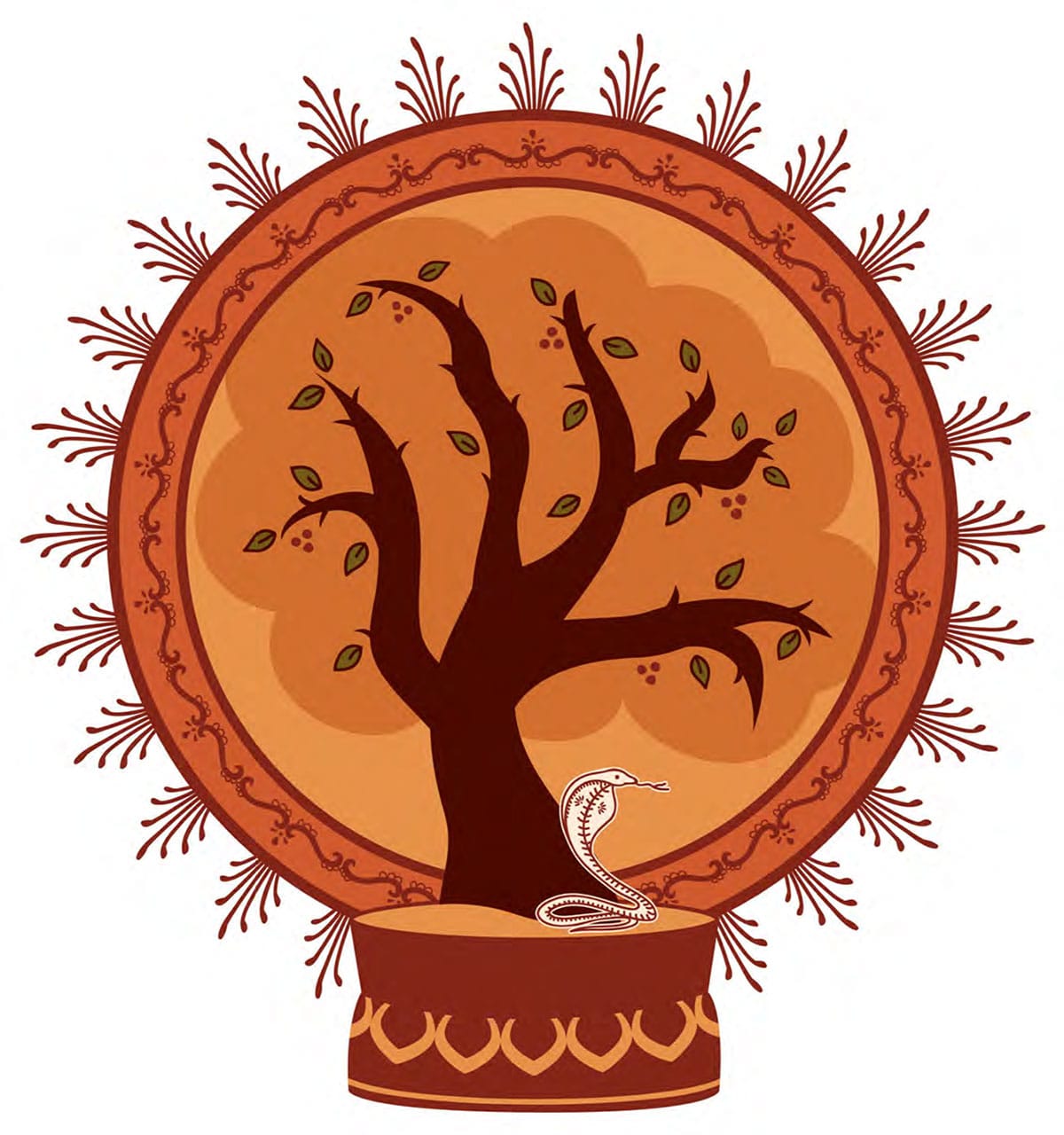 Using the traditional metaphor of the poison tree, Judy Lief teaches us four Buddhist techniques to work with our anger.

According to Buddhist psychology, anger is one of the six root kleshas, the conflicting emotions that cause our suffering. Its companions are greed, ignorance, passion, envy, and pride.

Anger can be white hot or freezing cold. Anger can be turned outward to other people, to a particular situation you are stuck with, or to life in general. It can be turned inward, in the form of self-hatred, resentment, or rejection of those parts of yourself that embarrass you or make you feel vulnerable. Anger can cause you to kill; it can lead you to commit suicide.

Anger is fueled by the impulse to reject, to push away, to destroy. It is associated with the hell realm, a state of intense pain and claustrophobia. That quality of claustrophobia or being squeezed into a corner is also reflected in the origins of the English word anger, whose root means “narrow” or “constricted.”

Anger can be extremely energetic. You feel threatened and claustrophobic, and that painful feeling intensifies until you lash out like a cornered rat. Or it can manifest as a subtle simmering of resentment that you carry along with you always, like a chip on your shoulder.

Like the other kleshas, anger is a part of our makeup. We all have it, but we deal with it very differently, both as individuals and culturally.

Since anger is a natural part of us, we cannot really get rid of it, no matter how hard we try. However, we can change how we relate to it. When we do, we begin to glimpse a quality hidden within this destructive force that is sane and valuable. We can save the baby while we throw out the bathwater.

In Buddhism there are many strategies and practices for dealing with anger. The overall approach is to start with meditation. In the context of formal sitting practice we can begin to understand the energy of anger, as well as the other kleshas, and to make a new relationship with it. On that basis, we can begin to apply this insight in the more challenging environment of day-to-day living.

The formal practice of mindfulness is the foundation for exploring the powerful energy of anger. It is hard to deal with anger once it has exploded, which is why meditation practice is such a helpful tool. By slowing down, and by refining our observational powers, we can catch the arising of anger at an earlier stage, before it has a chance to overtake us completely.

The practice of sitting still, breathing naturally, and looking attentively at one’s moment-by-moment experience is in and of itself an antidote to aggression. This is true because anger and other emotional outbursts thrive on being unseen. They thrive on the ability to lurk below the surface of our awareness and pop up whenever they please. So extending the boundary of your awareness takes away the natural habitat that sustains the kleshas.

Through meditation, we learn to tune in to what we are feeling and observe that experience with dispassion and sympathy. The more we can do that in formal mindfulness practice, the less under anger’s iron grip we will be. In turn, the more chance we will be able to transform our relationship to anger in the midst of daily life as well.

Where does anger arise? It is in the mind. So by taming the mind we can establish a strong base for understanding how anger arises in us and how we habitually respond to it. We can see how anger spreads and settles in our body, and how it triggers formulaic dramas about blame and hurt. We can expose our conceptual constructs about anger, our justifications, defensiveness, and cover-ups. On that basis we can go further using the following practice.

One traditional analogy for a progressive, step-by-step approach to dealing with anger and the other kleshas is the poison tree.

How do you deal with a poison tree? The first thing you might do is prune it, to keep it from getting too large or from spreading. But that just keeps it under control. The tree is still there.

However, once the tree is a more manageable size, it might be possible to dig it up and get rid of it completely, which seems to be a slightly better approach.

But just as you are about to do that, you may remember that a doctor once told you that this tree’s leaves and bark have medicinal qualities. You realize that it doesn’t make sense simply to get rid of that tree. It would be better to make use of it.

Finally, according to this story, a peacock comes along, notices the tree, and without further ado, happily gobbles it up. The peacock instantly converts that poison into food.

1. Pruning the Tree: Refraining from Indulging in Anger

The first step is to refrain from speech and actions based on anger. When anger arises, it has usually already taken us over by the time we notice it. The intensity of the emotion and our reaction to it are so tied as to feel almost simultaneous. We are desperate to do something with this anger, either to feed it or to suppress it.

In this step, we refrain from doing anything, no matter how strong the urge to do so may be. The practice is to stay with the experience of anger. We begin on the boundary, with the second-thought level, where we are tempted to add fuel to the flame or try to stomp it out and get rid of it. The practice is to engage in neither of those two strategies. It is to be with our anger without interpreting it or strategizing.

Our reactions tend to be so strong and immediate that initially we may not really get to the anger itself. But as our reactivity becomes less heavy-handed, a small, almost miniscule gap opens up between our anger and our reaction. In that gap it is possible for us to be with the anger and at the same time refrain from being caught up in it. We can relate to our anger more purely and simply, without second thoughts.

Once we are able to be with anger with more openness and less judgment, the second step is to look at it more precisely.

When anger arises, we examine it. We ask questions. To what do we attach the label “anger”? Is it a sense perception, a thought, or a feeling? How real is it? How invincible? Is it still? Is it moving? When we try to pin it down, does it slip away? Where does it come from? Where does it live? Where does it go? What are its qualities? Its texture? Its color? Its shape? What gives anger its power over us?

In this step we examine anger as a simple phenomenon. Where is the anger coming from? What is it aimed at? Is it our fault or is it the fault of someone or something else?

Look as directly as you can. What are anger’s roots? What is feeding it? Go level by level, deeper and deeper. Can you find its root cause?

3. Distilling the Medicine: Uncovering Wisdom in the Midst of Pain

In the third step we contemplate what it is about anger that is harmful and what might be of benefit. How could anger possibly be a form of medicine? If we got rid of our anger what would be lost?

Here the practice is to discern the difference between harmful anger and anger that benefits in some way. Clearly, the mindless expression of anger through words or deeds leads us to harm others and suffer harm ourselves. Yet repressing our anger also causes harm. The anger doesn’t actually go away but shows up in devious ways, wearing a disguise. So is there another option?

According to Tibetan Buddhism, there is a flip side to anger: there is wisdom in it. Normally we are too caught up in our personal struggles to connect with this wisdom, but anger actually has an integrity and a sharpness. It is a messenger that something is wrong, that something needs to be addressed. Anger’s awakened energy is said to be crystal clear, like a perfect mirror. It tells it like it is with no dissembling. Anger clears the air. It is immediate, and it is abrupt, but it grabs our attention and gets the point across. Anger interrupts our complacency and mobilizes us to take action.

When we encounter injustice being done to another, when we see violence inflicted on innocent beings, when we see the ways that humans justify almost any crazy act of violence, it is heartbreaking and makes us angry. So anger could be the catalyst that causes us to act with courage and compassion to address violence, injustice, and entrenched ignorance. And the more clearly we see such tendencies in the world around us, the more we come to recognize within us traces of these same tendencies to violence and dissembling. So anger has the power to strip the screens from our eyes, to cut through our ignorance and avoidance of harsh realities.

The destructive force of anger is real and apparent. In addressing its destructive force, we practiced restraint in the first step and we began to see through anger’s apparent solidity in the second. Now we are working with the wisdom potential of anger.

In fact, it may not be the anger itself but our tendency to hold on to our anger and its accompanying story line and self-absorption that is so harmful. When anger awakens us to a real problem that must be addressed, we can respond by wallowing in the anger and feeling good about ourselves for doing so. Or we can actually listen to whatever message that anger is bringing to us, while at the same time dropping the messenger. Then we can deal with what has been exposed to us by anger’s clear mirror.

4. The Peacock: Engaging Anger Without Fear or Hesitation

The final step is not actually a further practice, but more the result or fruition of mastering the other three steps. We continue to practice refraining from impulsive displays of anger, seeing through the apparent solidity of anger, and opening to the messages anger brings without clinging to the messenger. When we can do all that with ease, we may finally begin to be able to make use of anger as a tool or skillful means. If anger is called for and would be useful, we are not afraid to apply it. And when destructive anger does arise, we are not seduced, nor do we run away from it. We gobble it up on the spot. Not a trace remains.