The foundation of the Pure Land path, explains Takashi Miyaji, is Amitabha Buddha’s vow to liberate anyone who calls on him.

In a far-off celestial place to the west, Amida Buddha has a Pure Land, a realm where there is no suffering. It is said to be unexcelled—unique and exquisite, everlasting and limitless. In this “Land of Perfect Bliss,” buddhas, bodhisattvas, and sages are all welcome. And so are we.

According to Pure Land Buddhist teachings, anyone can be reborn in this Pure Land if they contemplate and entrust in the infinite wisdom and compassion of the primordial buddha Amida. For those reborn in the Pure Land, enlightenment is attained. In fact, birth in Amida’s Pure Land is itself nirvana.

The term “Pure Land Buddhism” can refer to the Pure Land teachings and practices that are widely taught in the Mahayana Buddhist traditions of China, Korea, Japan, Tibet, and Vietnam. It also refers to the independent Buddhist sect that was first established in Japan by Honen (1133–1212) and further popularized throughout the country by Shinran (1173–1263).

Originally, the term “pure land” (Sanskrit: ksetra-parisuddhi) meant “to purify a land,” referring to the activity or practice of a bodhisattva. However, Chinese texts began translating “pure land” to mean “a purified country” created by a buddha or bodhisattva. With the development of Mahayana Buddhism around the beginning of the Common Era, it became widely believed that the historical Buddha Shakyamuni was but one of innumerable buddhas who have attained enlightenment since the beginningless past and throughout the infinite cosmos. The teaching that there are countless buddhas who have created their respective buddha lands became popular in China, and then spread to other parts of Asia. 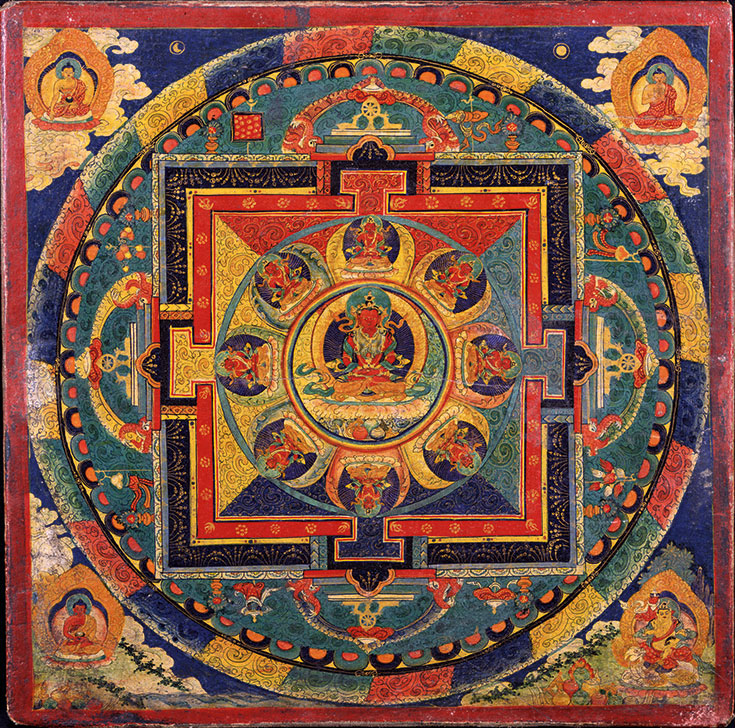 Tibetan mandala depicting Amitayus. Amitayus wears fine clothes while Amitabha dresses as a simple monk, but otherwise they are essentially the same. Painting via the Rubin Museum; Photo by hyperallergic.com

The name Amida is in fact the combination of two names: Amitayus, which means “immeasurable life,” and Amitabha, which means “immeasurable light.” Amida’s feature of having infinite light and life is analogous to having infinite wisdom and compassion. Thus, Amida Buddha is the embodiment of the Mahayana bodhisattva ideal, the fulfillment of wisdom and compassion.

“The Pure Land” (with the definite article) is understood to refer specifically to that of Amida Buddha. Other buddhas are also said to have their own pure lands, such as Mahavairocana, Aksobhya, Baisajya-guru, and so on.

Amida Buddha and his Pure Land are the expression of wisdom and compassion. The Mahayana understanding of wisdom (prajna) is that it is nondiscriminative—its basis is the teaching of emptiness. Because the Buddha thoroughly understands interdependence, he knows that nothing has a substantial essence that is autonomous. In other words, nothing is separate from anything else. All things are equal in the eyes of the Buddha because all things are completely and utterly interdependent.

Far Away, Yet Right Here

Amida’s Pure Land, also called “The Land of Utmost Bliss,” is said to be to the west of the realm of suffering, i.e., the saha world—this mundane world, also known as samsara. It’s taught that the sentient beings of saha can hope to be reborn in Amida’s pure realm if they focus their minds and aspire to be born there.

The Pure Land is different from the Christian notion of heaven, which is understood to be the opposite of hell. In contrast, the Pure Land transcends all such diametrically opposed entities. So the Pure Land, despite transcending the saha world, also embraces it.

The concept of the Pure Land being a western paradise in a particular astronomical location can be taken literally. However, the final awakening is of no-direction, or transcending-direction. So the teaching that the Pure Land lies in the west provides seekers with a sense of direction for embarking on a path to liberation. Then, upon being born in the Pure Land, they awaken to the world of nondiscrimination—the realm of absolute equality. They understand that the Pure Land is far beyond the parameters of logic.

What bar us from coming to this understanding are our attachments, or egocentric thinking. But much like the sun, whose light takes many light years to reach the earth yet is illuminating it as we speak, the light of Amida Buddha’s infinite wisdom emanating from the Pure Land reaches this world of suffering and embraces us right now with the warmth of infinite compassion.

So the Pure Land is not just a far-off place—it is dynamically working on us in this very moment, giving us direction. This provides us with the hope of attaining spiritual liberation and the confidence to live here and now, despite being in this realm of suffering.

Let’s look specifically at the Larger Sutra. It explains that there was once a bodhisattva named Dharmakara who came to see the human condition as one of suffering in which there was no chance for true spiritual liberation. In order to become a buddha, Dharmakara took forty-eight specific vows. Then, through eons of practice, Bodhisattva Dharmakara fulfilled his vows and eventually became Amida Buddha.

Of those forty-eight vows, the eighteenth is the central one. Known as the Primal Vow, it was Bodhisattva Dharmakara’s promise to facilitate the spiritual liberation of all sentient beings by giving them the practice of reciting the name Amida Buddha in the phrase Namo Amida Butsu. Called the nembutsu in Japanese, it translates as “Refuge in Amida Buddha.” 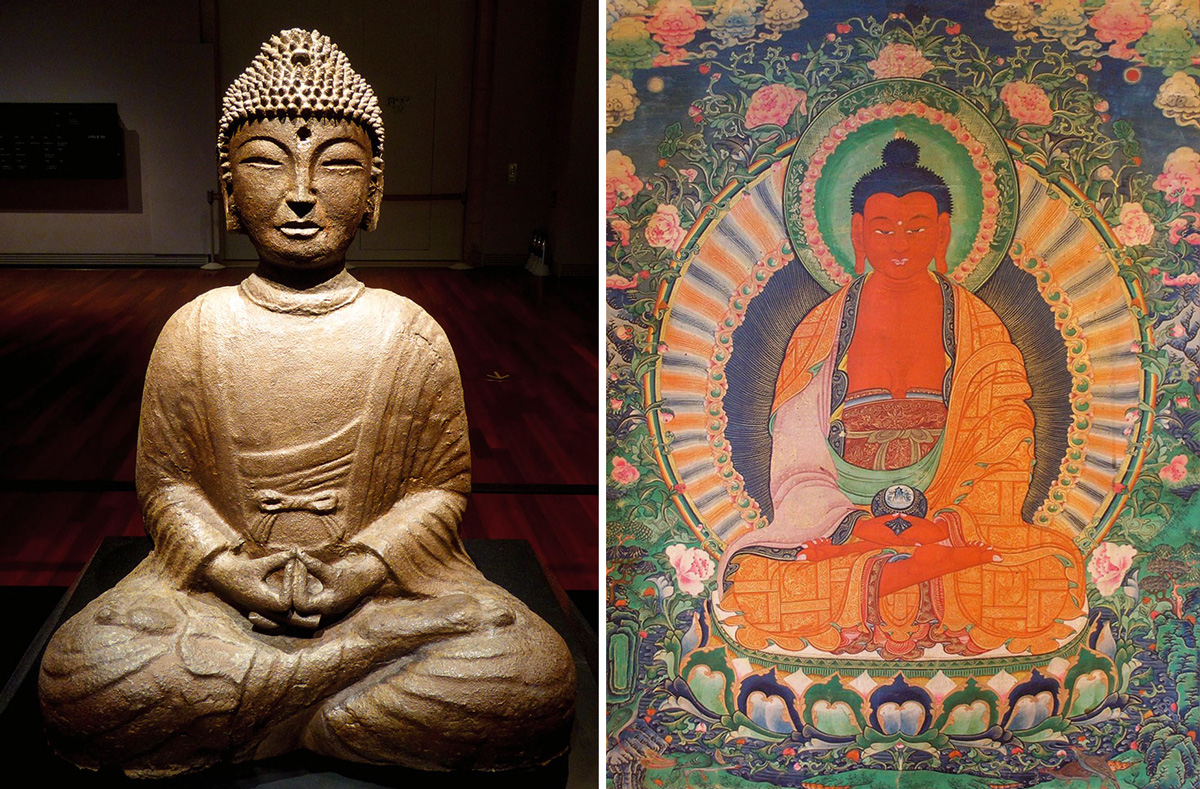 Left: A Korean statue of Amitabha, who before he became a buddha was a bodhisattva named Dharmakara. He vowed that he would help anyone who recited his name achieve liberation. Right: Mongolian painting of Amitabha. In Mongolia, as in Tibet, Amitabha is often depicted as red. Left: Photo by Ethan Doyle; Right: Painting via Zanabazar Art Museum

Other Power vs. Self-Power

Pure Land Buddhist teachings grew out of the belief that ordinary humans have become virtually incapable of attaining enlightenment from “self-power,” i.e., their own efforts alone. To truly find freedom from attachments, another power is now required.

In Pure Land Buddhism, this “Other-Power” comes from Amida Buddha. Through Amida Buddha, we realize there is no need to desperately seek truth; truth is always right there with us every step of the way. Truth is not something one grasps; rather, truth grasps the individual.

Awakening to truth isn’t contingent upon accruing merit through self-power practices. Indeed, self-power practices only lead to delusional efforts in trying to control truth. Instead, by letting go of our ego-self that forcefully tries to bring about truth, we are able to come to the profound awakening of being embraced by absolute reality, just as we are. The key then, is to hear and awaken to the voice of absolute truth calling out to us while in this life. This is none other than the voice of the nembutsu, that of Other Power.

The basis of Pure Land thought is Shakyamuni Buddha’s teachings on how we reach nirvana by overcoming our attachments.

According to Pure Land teachings, attachments are not the enemy to be extinguished by cleansing the self of any negative karma through rigorous practice. Rather, when we understand blind passions for what they are, they become the very source that enables us to awaken and rely on the true reality of the infinite wisdom and compassion that embraces us. Thus, regardless of inextinguishable attachments, no one is excluded from nirvana.

What is Pure Land Buddhism’s practice then? It is the nembutsu—contemplating, entrusting in, and reciting Amida Buddha’s name. But the purpose of the nembutsu is often misunderstood.

It’s not the case that the more times we think or say the name of Amida Buddha, the more we accrue merit and progress toward enlightenment. Rather, we contemplate, entrust in, and recite Amida Buddha’s name because the name itself brings us to true awakening. Amida is not a deity or a god like figure who grants our salvation. Instead, Amida Buddha, and the Pure Land itself for that matter, are the dynamic reality of nirvana that expresses itself with anthropomorphic features in order to deepen our understanding of our relationship with this ultimate reality.

Takashi Miyaji teaches at the Institute of Buddhist Studies in Berkeley, California. He’s the minister of Southern Alameda County Buddhist Church, part of the Buddhist Churches of America.