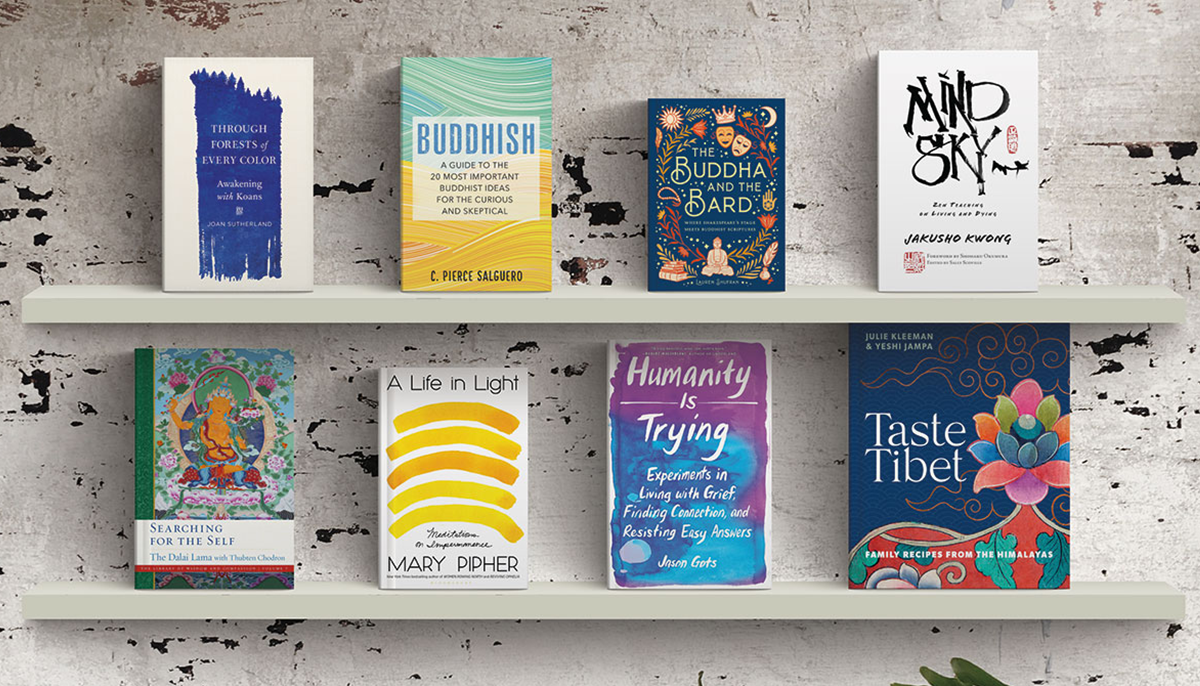 What is the sound of one hand clapping? This well-known koan is, as Roshi Joan Sutherland says, a bottomless well of a question. In Through Forests of Every Color: Awakening with Koans, she explores koans as both spiritual practice and art, demonstrating that koans call to us from everywhere and nowhere all at once. The way to enter each koan, she tells us, is through the ordinary experience of life, but it demands commitment and courage. For alongside the glimmers of insight and enlightenment comes what Sutherland calls “endarkenment,” the edge of that which is unknowable. This book teaches us that coming to terms with life’s pain means never turning away from the world’s cries but turning toward them, in relationship with others, and in a dynamic whorl of call and response.

Perhaps the only Buddhist book worth its salt is one that is both curious and skeptical. So despite C. Pierce Salguero’s vehement claims that he is a not “a Buddhist” (which any practitioner will appreciate and respect), his Buddish: A Guide to the 20 Most Important Buddhist Ideas for the Curious and Skeptical playfully and beautifully captures the spirit of Buddhist practice. It’s a primer for the reader who has heard a lot about Buddhism but perhaps rolls their eyes at what he calls the “saccharine platitudes” and “high-minded moralizing” one can find in Buddhist writing. In each chapter, Salguero introduces a Buddhist concept in plain English, drawing on his own understanding and experience, Buddhist scholars, and historical anecdotes from China, Korea, Japan, Thailand, Tibet, and other cultures, including the West. While Salguero says you may recognize these concepts in your own life, he promises no evangelizing or persuasive rhetoric. He delivers on that.

Lauren Shufran has created a fascinating read in The Buddha and the Bard: Where Shakespeare’s Stage Meets Buddhist Scriptures. I confess that any work connecting the work of 18th-century writer William Hazlitt, Jorge Luis Borges, William Shakespeare, and Shakyamuni Buddha has already won me over by its unlikely ingredients. Part literary scholarship, part Buddhist practice, and part soulful attention to literature, the book sets the Buddha and Shakespeare beside each other because both perceived human nature and suffering with penetrating insight. Central to their understanding is the inherent theatricality of existence, our ephemeral fictionality, because there is no unchanging essence called “I.” Shufran’s book rests on the evident premise both Shakespeare and Buddha realized: as humans, we’ve taken form and our suffering merits attention if we are ever to see beyond it.

Mind Sky by Jakusho Kwong-Roshi, a student of the late Shunryu Suzuki Roshi, has been edited by his student Sally Scoville to read both as an introduction to Zen and a powerful reminder for experienced practitioners about what the practice entails. Kwong-Roshi warns us against the misuse of mindfulness: without a spiritual basis, he says, it is limited and possibly laden with false promises. The way-seeking mind calls to practitioners in moments of unwavering inner attention. Some religious traditions promise something, and offer ideas; Zen is nonconceptual and promises nothing.

What is this Buddhist concept of “emptiness”? What does it mean to experience the self as somehow “empty”? How can reading or thinking about it be any help to us? In Searching for the Self, the first of three volumes on emptiness, the Dalai Lama (with Thubten Chodron) articulates some common views of the self that are so ingrained we may not even recognize them. As ever, his approach is one of common sense and starts by asking the reader to acknowledge that we are fundamentally human and that this is a foundation we all share. As such, we all experience resentment, jealousy, and hatred, and if satisfying our immediate needs and whims is our focus, happiness will elude us. Instead, we must widen the sphere of our love through transcending our narrow and mistaken views of the nature of self.

With a nod to her Buddhist practice and, amid climate change, to the passing away of the world as we’ve known it, Mary Pipher describes experiencing light of all kinds—literal and metaphorical. In A Life in Light: Meditations on Impermanence. Pipher tells a story of sorrow and loss in which she has nevertheless experienced much joy, love, and worldly success. Looking for light does not mean denying the darkness—the book takes an intimate look at her most painful experiences. Her life offers her continual lessons in loss, and though we too may develop resilience as Pipher does, being human means never really getting used to the hurt of it. So may we, like Pipher, lead a “double life” of experiencing exquisite beauty amidst sorrow and suffering.

In Humanity Is Trying: Experiments in Living with Grief, Finding Connection, and Resisting Easy Answers, Jason Gots turns straight to his pain, not only reliving the terrible losses of his best friend and sister, but also repeatedly embodying the hurt of his childhood, adolescence, and violent family. With a skeptical eye on pop spirituality and the wellness industry, he explains what otherwise abstract Buddhist concepts really look like in the life of an ordinary American adult, demonstrating that suffering has to be faced and mourned. Gots is unabashedly real about his own trauma, and part of what makes this so bold is that he acknowledges his background of significant privilege. Far from undermining the pain less-privileged people have experienced, his dialogue opens up the possibility of having compassion for everyone’s suffering, without comparing them.

Award-winning food writer Julie Kleeman and Tibetan cook Yeshi Jampa met in Dharamsala in Northern India and shared their first meal in a small concrete room with no sink, no water, and a single can of fuel to cook with. They now share two children and run Taste Tibet, a restaurant in the U.K. In spare and elegant prose, Taste Tibet grounds the reader in the geography and history of the Tibetan plateau, detailing not only the recipes themselves (some of them thousands of years old), but also the extent to which food is medicine to Tibetans, why the sourcing of ingredients is so important, and why reverence, even silence, is an important ingredient itself in traditional households.

My family spent an afternoon making momos, the famous Tibetan dumplings, in the spirit of the book. With all of the very simple, spare ingredients in hand. I was amazed by how simple they were to make, and how much fresh spinach a toddler will eat if it’s enclosed in a dumpling. The book is a new kitchen staple for me, and I’m grateful for all Yeshi and Julie have shared about nomadic Himalayan food culture and practices.