They have five pairs of tiny beating hearts. But what really makes earthworms precious, says Lin Jensen, is simply that they exist. 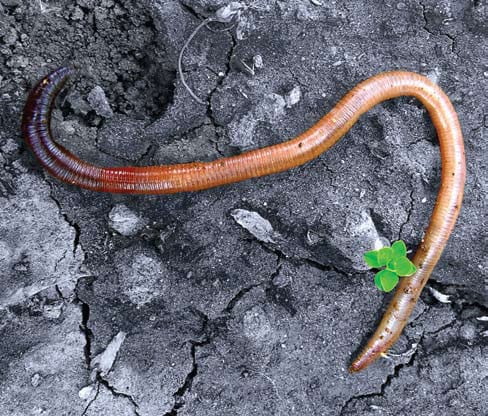 On dark mornings after nights of heavy rainfall, I find earthworms stranded on the concrete sidewalk that leads to my front door and on the asphalt pavement that winds through the woods along Chico Creek. Caught on these alien plains, the worms contract and expand their little segmented bodies as they inch toward certain death—certain death because if left exposed to even the palest sunlight, the rays will kill them. They will shrivel down to a crusty hardness, like a twisted twig or a stiffened length of discarded leather shoelace.

I can’t leave the earthworms to die. I simply must return them to the lawn or put them under a shrub. But an earthworm is actually difficult to take hold of. Their bodies are coated with a lubricant that allows them to move smoothly through the little channels that they create underground, so when you take hold of one, you’ll find it’s very slick and will easily slip from your fingers and fall back on the concrete. Not only that, an earthworm’s response to being touched is to wriggle and twist about in order to free itself.

I’m aware that a certain comic absurdity attends the image of a seventy-seven-year-old man struggling to save the lives of earthworms that are fiercely resisting rescue. Seeing them perplexed by the loss of familiar habitat, however, calls up my own loss of familiar ground—the fields and family farms of my youth that have given way to shopping malls and freeway interchanges. Am I not, like these bewildered creatures, also caught out on the pavement? It’s not unreasonable to feel this way in a world encrusted with structures of our own invention, a world where so much of the natural order, rhythms, and textures of the living earth lie buried beneath the works of our own hands. It’s not a new circumstance, and it’s not just about worms. A century and a half ago, Gerard Manley Hopkins, witnessing the engines of industry unleashed upon the land, saw firsthand the high cost of the human ambition to control and subdue: “Generations have trod, have trod, have trod; / And all is seared with trade; bleared, smeared with toil; / And wears man’s smudge and shares man’s smell; the soil / Is bare now, nor can foot feel, being shod.”

Yes, we have more in common with earthworms than we might at first suspect. I’ve learned that lumbricus terrestris is the scientific name for the worms I pick off the sidewalk and that a typical lumbricid, like we humans, has a brain, albeit a rudimentary one. And, like us, it has a heart. In fact, it has ten hearts—five pairs that pump blood through a closed circulatory system like our own. And while it’s true that earthworms eat dirt, it must be admitted that we do too. Since soil is the basis for all terrestrial plant life, can it not be said that I’m compelled to eat from the very dirt under my feet? And if the improbable transformation of sunlight to chlorophyll by way of photosynthesis is the critical support for the entire earthly food chain, don’t the worms and I share an unavoidable appetite for sunlight as well? And can’t it be said that I eat the worms themselves, since their castings feed the plants upon which I in turn feed? That the worms and I and all of creation are wrapped up with each other in a state of such inseparable interdependence is both a basic tenet of modern ecology and the primal structure and insight upon which Buddhist ethics are based.

I once came upon a surprising and arresting statement by Charles Darwin about the common earthworm: “It may be doubted whether there are any other animals which have played so important a part in the history of the world, as have these lowly creatures.” I must have been fourteen or fifteen years old when I read this, but I somehow knew that what Darwin said of earthworms might well be said of any creature on Earth. We cannot choose what life forms to share our planet with, selecting only those to our liking and dispensing with all the rest.

Earthworms are particularly illustrative of the folly of ignoring the essential symbiotic relationship of all life. Yet, I have found that there are people who simply loathe worms, finding them disgusting. My neighbor across the street, for instance, has been waging a decades-long war with the worms in her lawn. She complains that they leave “unsightly” droppings and that she’s found no effective way to be rid of them. What’s missing in her complaint is the fact that the reason her lawn stays so green and vibrant is because of the very earthworms she’s been struggling all these years to exterminate. Earthworms are nature’s preeminent composters. They convert dead organic matter into rich humus essential to the growth of healthy plants. Not only that, earthworms also “plow” the soil by tunneling through it, and these tunnels are the passageways through which air and water circulate. Soil microorganisms and plant roots need air and water just as we do. Without this vital work of the worms, soil would quickly compact to the point where air and water would no longer reach the roots of plants. Should this ever occur, we will watch—helpless and perplexed—as everything green turns gray, withers, and dies.

That said, the follower of the Buddhist path does not value the whole of the natural world because she recognizes her dependence on it to sustain her own life. Instead she values her fellow beings, sentient and non-sentient, simply for their own sakes. This is a traditional Buddhist understanding that accords with the contemporary understanding of deep ecology. When Arne Naess, the recognized founder of deep ecology, and his colleague George Sessions wrote the first three principles of their Deep Ecology Platform, they were stating principles already paramount in the mind of a Buddhist: (1) all life has value in itself, independent of its usefulness to humans, (2) richness and diversity contribute to life’s well-being and have value in themselves, and (3) humans have no right to reduce this richness and diversity except to satisfy needs in a responsible way. Nowhere that I know of in the long Buddhist lexicon will you find stated principles quite like these, yet I think they are principles that would seem perfectly familiar and self-apparent to the early followers of the Buddha 2,500 years ago.

When an aging Buddhist such as myself stoops to rescue a stranded earthworm from the sidewalk, his doing so costs him nothing more than a moment’s mindful attention. He only needs to notice what is happening and act in accordance with the obvious requirement of the moment, and he does so simply because this little creature exists. So his act may not seem to count for much in the larger scale of events; after all, an acre of cultivated ground contains thousands of such worms. Yet in the very motion of his arm, reaching out and returning an earthworm to its rightful habitat, he enacts the quintessential movement of twenty-five centuries of Buddhist ecology.