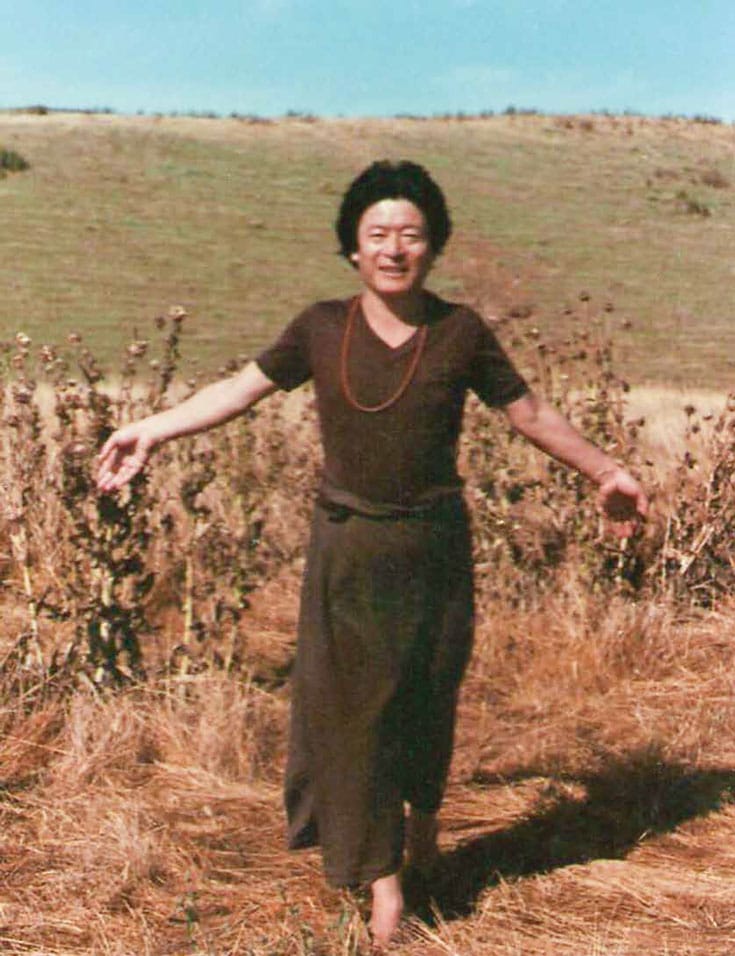 A selection of teachings from various books by Thinley Norbu Rinpoche, the Nyingma lineage master considered to be an emanation of the fourteenth-century Nyingma master Longchenpa.

Wisdom Mind and the Birth of Samsara

All generally visible measureless phenomena elements are the display of self-secret divisionless unobstructed Wisdom Mind. The nature of mirrorlike Wisdom Mind is that everything arises with infinite obstructed and unobstructed potential.

Whenever we do not recognize the pure nature of the manifestation of wisdom display, we cling to unobstructed mind’s uncatchable self-arising reflection, obscuring its inseparable emptiness and luminosity, and separating the divisionless phenomena elements into subject and object. As soon as there is division, there is impurity and obstruction. With this division, “I” becomes the subject and what this “I” perceives becomes the object, whether one or many, lifeless or lively, inanimate or animate.

With this division, there is constant moving back and forth between subject and object, which is the beginning of direction and time, between root circumstances and contributing circumstances, between rejecting and accepting unpleasant and pleasant phenomena, between bad and good intentions, and between doubting and hoping. We call this divided mind dualistic mind, which is the cause of bad and good karma.

Whenever we recognize the pure nature of the manifestation of self-secret invisible wisdom display, we are aware of the pure secret essence of the elements. With this recognition there is no subject and no object, no beginning and no end, no direction and no time, no root circumstances and no contributing circumstances, so there is no karma. With this recognition, absolute truth and relative truth become inseparable, nondualistic, clear awareness space. In this space, phenomena arise freely and this display of Wisdom Mind is not nothingness. The enlightened mind dances unobstructedly with phenomena yet has the potential to obstruct phenomena at will like choosing to eat or not to eat.

Enlightened mind reflects all the five wisdoms in equanimity. But through ignorance, over countless lifetimes we have created conceptions and karmic habits which obscure our Wisdom Mind’s lively, unobstructed, mirrorlike quality. Because of our obscured ordinary mind, our ego makes categories out of equanimity. With ego and categories come substance, with the birth of substance comes its death, and with death comes suffering. Our inert and stale karmic body and all other substances are the gross element result of our inability in previous lives to recognize the invisible secret essence of all substance. We are lost and suffering because of external staleness and internal ignorance. But even though we cannot recognize our invisible secret essence immediately, it is not necessary to think that it is far away. Our secret essence is always within the gross and subtle elements.

From Magic Dance: The Display of the Self-Nature of the Five Wisdom Dakinis

The Buddhist view is to recognize that we must not remain within ordinary phenomena by following a worldly philosophy limited to ordinary, substantial reasoning. We must decide to increase pure phenomena by following a spiritual philosophy which goes beyond ordinary reasoning and leads to enlightenment. Buddhist philosophy is entirely spiritual. Its purpose is to refute the views of the two extremes of nihilism and eternalism by the skillful means of wisdom, to release all beings to enlightenment.

Some nihilists in particular think that Buddhism is only a philosophy and not a religion. This misunderstanding is the result of holding the nihilist point of view, which does not accept the intangible, imperceptible qualities of nondualistic wisdom that can appear tangibly or intangibly. Because the nihilist point of view is confined to the reasoning of dualistic mind, it is actually impossible to use it to define or evaluate the qualities of Buddhism deeply and clearly, since they are beyond ordinary perception. Even the difference between ordinary and spiritual qualities cannot be analyzed.

The nihilist view of believing only in this momentary life is the result of considering substance to be the fundamental constituent of all phenomena, including one’s body, the objective gross elements, whatever arises from these gross elements, and whatever can be perceived. There are many different ways to understand substance within relative truth, since there are infinite relative truths. Nihilism means becoming caught within each temporary circumstance of relative truth and believing in its reality, so the perception of substance seems real.

Substance is not only one part of something. It is all the immeasurable forms of samsaric existence, unless it is transformed into immeasurable, substanceless, wisdom light appearances which are beyond all interdependent cause and result. This is the meaning of substancelessness. Substanceless wisdom is unobstructed and pervades everywhere in samsara and nirvana without intention as self-accomplished compassion, so it can manifest within substance, but it never remains there. Its essence is always nonsubstance, which is the quality of Buddha.

From White Sail: Crossing the Waves of Ocean Mind to the Serene Continent of the Triple Gems

The beginningless wisdom of Buddhas is not ordinary beings’ wisdom. When the state of full enlightenment is reached, there is no name of worldliness. One cannot only conceptualize this. Fully enlightened Buddhahood is full wisdom and full wisdom activity. Buddhas’ mind is wisdom, but Buddhas such as Guru Rinpoche and many others emanate in samsara to benefit beings. They teach faith, meditation, and realization, manifesting in the state of impure worldly wisdom to guide others, but their mind is fully enlightened Buddhahood. This wisdom excels beyond samsara in order to guide beings by showing a history and an order of stages of how to enlighten, but Buddha does not have any conception of order. If there is no conception, there is no stage. When Buddhas emanate, they have to emanate according to beings’ phenomena, showing histories to other beings, such as that of Buddha Shakyamuni learning, studying, and enduring hardship for six years so others can follow the example of these histories and open buddhanature through practice, as Buddha taught according to Mahayana, until finally reaching the fully enlightened state in which there is no fixation of time, place, or direction, where all Buddhas abide.

From A Cascading Waterfall of Nectar

According to the Mahayana view, nothing tangible or intangible can affect great emptiness, which is always unobscured and pure. This is called the essential permanence of Dharmakaya. Dharmakaya is completely pure formless form.

The nature of Dharmakaya is unobstructed like stainless sky, so any wisdom qualities and aspects can manifest from its unobscured spontaneity. Since Dharmakaya is pure, whatever appearances radiate from it are self-adornments and always pure. This pure appearance is called the continuous permanence of Sambhogakaya. Sambhogakaya is immeasureable qualities of flawless, inconceivable, desireless exaltation form.

At the time of the meditation of tranquil stillness and true seeing, although this meditation is not the basic nature of clarity and emptiness just as it is, it is the arising of an aspect of experience that is similar, like the way the form of the sky appears in water. This is called an example demonstrating clear light. The essential nature of wisdom is free from the coverings of experience, like stainless sky. When this is realized, it is called absolute clear light.

By realizing the basic nature of the great bliss of the clear light of empty awareness and by continuously sustaining it, when one actually accomplishes the stages of the path, the consciousness of the five senses will dissolve into mind. Mind will dissolve into the consciousness of alaya. When alaya dissolves into the dharmata of empty clear light, even though there is no consciousness, because consciousness is purified from the root, self-awareness wisdom light will arise like stainless sky. Thus it is also said. For example, when gold mixed with earth, stone, sand, and so on is melted down and refined, the power of the ordinary stain or nature of the elements of earth and stone is reduced more and more, like the gross energy of obscurations, and the quality of the element gold is purified more and more. Eventually the time will come when even the object of purification, the gold itself, will be purified and there will be nothing left.

From A Cascading Waterfall of Nectar

Thinley Norbu Rinpoche (1931-2011) was an important modern teacher in the Nyingma lineage of Tibetan Buddhism. He was the eldest son of Dudjom Rinpoche, the former head of the Nyingma school, and also the father of Dzongsar Jamyang Khyentse Rinpoche and Dungse Garab Rinpoche. Thinley Norbu Rinpoche was considered to be an emanation of the 14th-century Nyingma master Longchempa. He wrote many books including A Cascading Waterfall of Nectar , White Sail, and The Small Golden Key .