After visiting the concentration camp where her Jewish father was held during the Holocaust, Roberta Werdinger reflects upon sites of trauma. 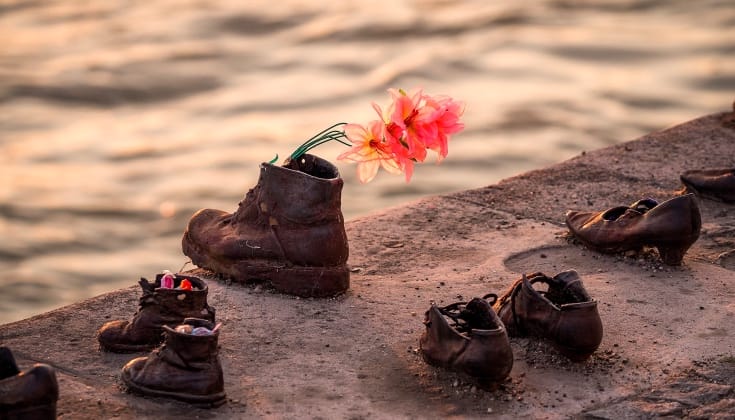 In May of 1995, I found myself standing with my father, a Polish Jew who had lost his entire birth family in the Holocaust, at the threshold of the worst place in the world. We had travelled to northern Austria, along with thousands of others, for the fiftieth anniversary of the liberation of the Mauthausen concentration camp, a place he knew only too well. A chartered bus had let us off in what once was a quarry. Prisoners—starving, brutalized, and freezing—had been made to carry rocks up this path, the very path we were walking. If they failed, they were made to run to the camp fence and summarily shot.

At the top of the quarry path, an old man wearing a prisoner’s uniform that was half a century old wept openly as prayers for the dead were recited in Hebrew. We looked into a barracks where Jewish prisoners had been crammed into bunk beds—two to a narrow mattress. We walked through an exhibit of Nazi camp records with lists of prisoners classified as Jewish, Gypsy, homosexual, criminal, or prisoner-of-war. We passed fresh flowers that had been placed on barbed wire as memorials to the dead.

At a small underground bunker, my father stopped short. “Oh! This was the worst place in the camp,” he said. “When they wanted to finish someone, they brought them here.” Steel rings were fixed to the wall, where prisoners had been secured and tortured to death. We walked down the steps and joined the crowd, which pressed in thickly on all sides. Murmurs in German, English, Polish, and Yiddish reverberated off the stone walls.

“Did they ever take you down there?” I asked my father. His laugh was short and sharp, a mixture of relief and pain. “Of course not,” he said. “I wouldn’t have come back.”

After ascending from the bunker, I was oddly relieved. I had needed to know I wasn’t alone in my quest, and now I had allies—Poles and Germans, Australians and Americans, Jews and Gentiles—who had cared enough to attend the commemoration at Mauthausen, who also had needed to be there.

Coming to terms with both the inner and outer implications of such an experience hasn’t been easy. I’ve had to face the fact that the human potential for violence, for flat-out sadism, is unlimited, that, as the poet and activist Carolyn Forché put it, “there is nothing one man will not do to another.”

Yet there were people who had given their lives to help others survive. There was the Italian woman who had sheltered my maternal great-uncle from the Nazis, only to be denounced and executed. And the Volksdeutschers, ethnic Germans residing in Poland, who had risked death to hide my father’s cousins.

What I found when I pushed through my resistance to facing the horror was barbed wire and flowers, resplendent beauty laid upon tortured flesh, arising after arising, gorgeous, sickening, and inexplicable, and the renewed strength to simply stay and witness it.

Through meditation, I have learned about my own walls, the ones I built myself. I saw how I projected my worst qualities onto others. I saw how I unconsciously incorporated into my personality the entire sadistic drama, how I used negative self-talk to continually shoot down my most vulnerable tendencies.

We all have our own worst place in the world. It might be an actual place, a site of trauma. It might be a recess in the mind that we have spent a lifetime fleeing. Whatever its shape, its particular sound or smell, if we are to awaken, we have no choice but to make the descent and face the shadow that bedevils us. I am lucky that I was able to make this descent in such good and vivid company. I am grateful to those who, then and now, refused to turn away from the stark violence that racial and religious prejudice can inflict. Most of all, I am grateful to my meditation practice for giving me the fortitude to look squarely at the shadow that walked behind me that whole time.

Roberta Werdinger is a poet, freelance writer, and editor in Ukiah, California. She lived at Tassajara Mountain Center and Green Gulch Farm Zen Center for ten years, and was ordained by Tenshin Reb Anderson in 2000.