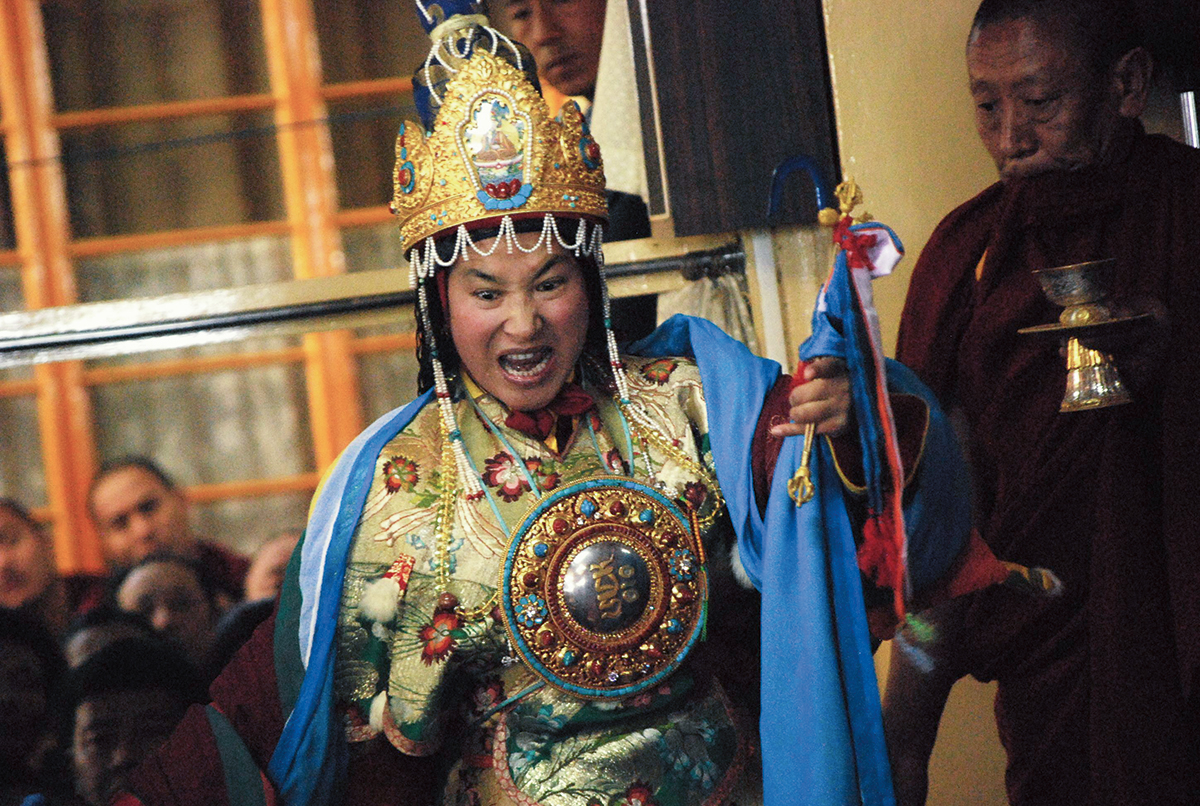 Walking by Kandy Lake on our first visit to Sri Lanka in 1981, my wife and I met a young man claiming to be the nephew of the abbot of a nearby Buddhist monastery. We were dubious, but when he offered to introduce us, we agreed. Before we knew it, we were in an ornate reception room at the vihara, bowing to an elderly monk and then sitting at his feet. We expected him to deliver a short discourse on impermanence or encourage us to observe the five precepts, or perhaps instruct us in mindfulness meditation, but instead, he spent the entire time talking about the importance of astrology and amulets and provided each of us with a talisman for our onward journey.

A few days later, we spoke with a monk at a bhikkhu training center near Colombo, and, without being specific, asked him, “What would you think if you met a Buddhist monk who only talked about astrology and amulets?” His reply was emphatic: “That is not Buddhism!”

These encounters typify the cultural and intellectual tension at the heart of Sam van Schaik’s wonderfully readable and eye-opening new book, Buddhist Magic. As van Schaik notes at the outset, magical practices in Buddhism “are still one of the least studied aspects of the religion,” primarily because of “the idealized image of Buddhism as a rational religion, essentially free from superstition and ritual.”

When presented with evidence of such practices in contemporary Asia, modern Buddhist practitioners and scholars often take them as evidence that through its blending over the centuries with popular traditions and ideas, Buddhism degenerated from the rational, philosophical, ethical, and contemplative religion taught by Gautama to the compromised and complicated cultural system we see in place today.

Van Schaik’s aim, then, is to counter the common modernist view that the varied “magical” practices of Asian Buddhists are simply “a lot of cultural baggage that is not really Buddhist.” He approaches his task as a textual and intellectual historian, plumbing a selection of written sources from premodern Asian societies to demonstrate the ubiquity of magic throughout the history of Buddhism—indeed, “as far back as we can go.”

Before embarking on his tour of the Buddhist magical world, van Schaik steps back to ask the obvious question: what is magic? He readily admits that “there is no word that exactly corresponds to magic in Asian Buddhist cultures,” but argues that the term has been “a lively and productive concept in the study of various rituals found throughout the world,” and hence it can be useful for understanding Buddhism, as well. He refuses to theorize or give an “essentialist” definition of the term (“magic is always and exactly x”), opting instead to search for “family resemblances” among different instances of magical practices found in a range of premodern and modern cultures. Along the way, he surveys the charms, spells, prayers, objects, and rituals described in the Indian Atharva Veda, the Chinese Shuihudi bamboo strips, the Mesopotamian library of Ashurbanipal, the Greek magical papyri, the Jewish Cairo Genizah, and European books of magic.

At the end of his survey, van Schaik offers a working definition of magic, which, he says, applies to Buddhist contexts as surely as to others: “[Magical] practices … are focused on worldly ends, including healing, protection, divination, manipulation of emotions, and sometimes killing. The effects of these techniques are either immediate or come into effect in a defined, short-term period. The techniques themselves are usually brief, with clear instructions that do not need much interpretation, and are gathered together in books of spells.” Although magical practices may be practiced by laypeople, they often require a specialist: a shaman, seer, priest, adept, or monk.

For his account of premodern Buddhist magic, which takes up the remaining chapters of the book, van Schaik specifies he will focus on texts “entirely performed for ‘this-worldly’ ends.” In this way, normative Buddhist ideals, such as liberation from samsara, the exemplary role of arhats and bodhisattvas, and the cosmological system of karma and merit fade into the background in the face of more pragmatic concerns: illness, infertility, inclement weather, danger from enemies, and common anxieties and afflictions. Magical practices don’t typically bring about enlightenment, but with the right specialist or the proper ritual, they are believed to offer some kind of power over the forces that disturb one’s life and make the pursuit of higher spiritual ideals difficult, if not impossible.

Van Schaik briefly analyzes the attitude toward magic at early Buddhist monastic sites in India, where statues of protective deities at entry points imply the magical invocation of divine forces to preserve the integrity of the sacred precincts. Turning to early Buddhist texts, he notes that on the evidence of the Pali canon, we cannot be certain what the Buddha thought of magic. In some suttas, the Buddha condemns magical practices, while in others he offers protective and medicinal spells. There is no question, though, that for many centuries the suttas best known by Theravadin laypeople have been those collected in a compendium called the Paritta, which is chanted primarily so as to ward off misfortune.

Furthermore, birch bark scrolls and other early texts found in Gandhara, Kucha, Gilgit, and other parts of Central Asia show that magical practices of all kinds—whether for protection, health, divination, or to influence others—were part of the repertoire of a great many Buddhist monks. Magic and medicine were not easily separable in the ancient world, and bhikshus were renowned throughout Asia for their medical expertise. In healing their patients, they resorted to both empirical analysis and magical rituals, and their medical and magical service to the lay community, in turn, ensured that monastic activities and institutions would receive continued support. Thus, magic was as much a part of the spread of Buddhism as its philosophy, psychology, or ethics—however sublime.

Next, the author surveys the role of magic in a number of Mahayana sources, analyzing the role of protective spells and rituals found in such major texts as the Golden Light, Great Cloud, and Lotus sutras. He then focuses particular attention on the Dharani sutras, a collection of spells and rituals that “were probably the most copied, recited, and well circulated Buddhist texts” of the first millennium. The Dharani sutras provide a bridge between “standard” early Mahayana and tantric Buddhism, in which “incantations, magic circles, anointment, and other techniques originally used for rituals to bring health and avert disease and disaster were placed front and center in the path to enlightenment itself.” Tantric practices, with their emphasis on a “magical” understanding of the malleability of reality, formed the ritual basis for later Mahayana practice in India, and still are a vital part of Buddhism in Nepal, Tibet, and Mongolia.

Van Schaik considers the variety of practitioners who have employed magic across the Buddhist world. Many are monks, but laypeople, like the wizards (weizza) of Myanmar or tantrikas (ngakpa) of Tibet, may also be regarded as spell holders, or vidhyadharas, a Sanskrit term that might come closest to being a translation for “magician.” He also discusses the variety of “monsters”—the dragons (nagas), ogres (yakshas), ghouls (rakshasas), ghosts (bhutas), and imps (sri)—invoked in magical practice.

In a final chapter titled “A Tibetan Book of Spells,” van Schaik translates and analyzes a thousand-year-old Tibetan spell book found in 1900 in the caves of Dunhuang in western China. This book, which “may be the earliest surviving compendium of Buddhist magic,” is divisible into nine sections, ranging from healing mind and body to controlling the weather and pregnancy rituals. It was reading this text that first inspired van Schaik to research the history of Buddhist magic, and his clear translation and explanation of it is a fitting culmination for his wide-ranging and persuasive analysis. 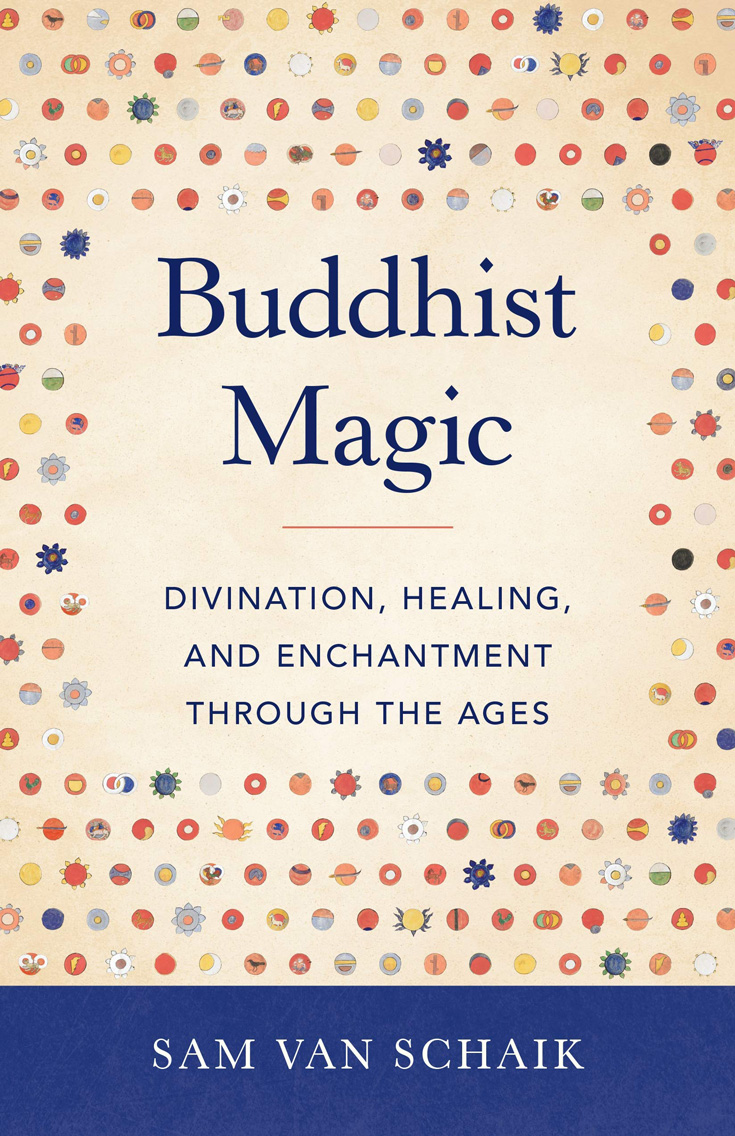 As wonderful as Buddhist Magic is, it would have been helpful if van Schaik had opened out his discussion in a few directions. While it may have been prudent of him to avoid proposing a theory of magic, readers might wonder what constitutes the “magical thinking” that has for so long been a potent part of human culture. In this regard, he could, for instance, have cited Stephan Beyer’s discussion of Tibetan tantric—and magical—assumptions about the “softness” of reality, the invisible connections among things, and the mage’s capacity to effect events at a distance, which seem to be the basis of magical practice in many places and times.

Moreover, it feels like a missed opportunity that the author chose not to discuss the magical abilities or superpowers said by Buddhists to ensue from meditative concentration, since they’re not always easily separable from the sorts of practices he attends to in the book (contemplative prowess is often a qualification for success in magic). Narrative and theoretical sources celebrating such powers go very far back in Buddhist history and would have added support to his general claim about the pervasiveness of magic in Buddhist cultures.

Van Schaik concludes with a brief but thought-provoking afterword, in which he reiterates his finding that, as far back as we can see, magical practices have been a key feature of Asian Buddhism, readily accepted, widely practiced, and vital to the religion’s success. He concedes that in our modern, dis-enchanted era, where Buddhism has become virtually synonymous with mindfulness, “there might be an argument for a different kind of Buddhism that does not include dealing with [pragmatic concerns], but that would be something quite new, not a return to a mythical pure, original Buddhism.” Rather than demean the practices of Asian Buddhists by saying—as my wife’s and my Sri Lankan interlocutor did—“That is not Buddhism,” we should acknowledge that Buddhist magic “has eased suffering … and built bridges between the high aims of Buddhism and the everyday needs of people who support it.” And if the true power of Buddhist magic is to ease the anxiety and suffering of ordinary Buddhists, then, as van Schaik says, “perhaps, after all, mindfulness and other therapeutic offshoots of Buddhism are the closest thing to Buddhist magic in contemporary Western societies.”

Or maybe not. As I completed this review, much of the world’s social and economic life had been shut down by the coronavirus pandemic of 2020. While Buddhists were often enjoined by their teachers to see their enforced social isolation as an opportunity for retreat, in which they could deepen their inner awareness and express compassion in new and creative ways, other teachers, especially from Tibetan lineages, were recommending practices that could easily have come from millennia-old magical texts. Indeed, one Indian goddess mentioned in the Dunhuang text studied by van Schaik, Parnashavari, long reputed to have power over epidemics, has been revived as a focus of prayer in the present crisis, her mantra suddenly on the lips of Asian and Western Buddhists alike, all entreating her to work just a little of her old, white magic to cure, or at least console us in our hour of need. Perhaps in the end it is as van Schaik says: “Magic is our shared heritage.”