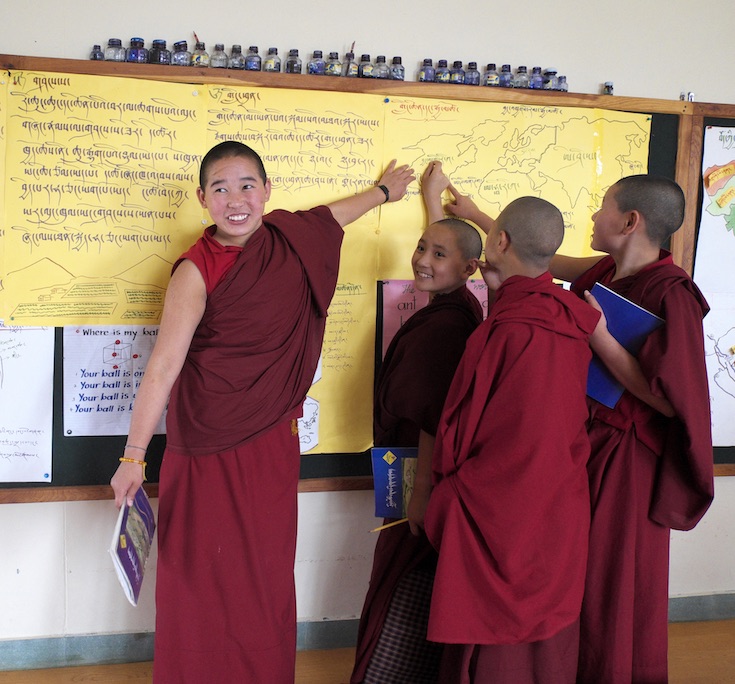 Thirty years is a long time. Just not long enough for Rinchen Khando Choegyal to forget what she saw when large numbers of refugee Tibetan nuns began arriving in India in 1987, after China started cracking down on the Tibetan independence movement.

The most pressing need then, the Dalai Lama’s sister-in-law says, was “to shelter and look after these nuns.” Many had been traumatized and physically battered after enduring torture and imprisonment in their homeland at the hands of Chinese authorities.

Enter the Tibetan Nuns Project, founded by Choegyal and other exiled Tibetans, and celebrating its thirtieth anniversary on October 30 2017. Today, with the help of its sponsors, the organization supports and houses some 700 Tibetan nuns at its eight Indian nunneries.

It is very important for the nuns to get the same quality education as the monks.

The project’s other central purpose can also be traced to those early days. Many of the Tibetan nuns who arrived after 1987 were illiterate. Their nunneries had offered them little access to education and religious training—a reflection of the second-class status generally accorded female monastics throughout Tibetan Buddhism.

Now, the ordained women cared for by the project receive the kind of higher education until recently almost unthinkable for Tibetan nuns. An important milestone was reached in 2016 when a group of nuns educated at the project’s nunneries became the first Tibetan women to pass all the exams for the Geshema degree, equivalent to a doctorate in Buddhist philosophy.

The project has helped break another major barrier. By supporting the Jang Gonchoe session, a month-long Buddhist debate, it is finally making a centerpiece of Tibetan monastic tradition available to nuns.

“It is very important for the nuns to get the same quality education as the monks,” says Choegyal, now a co-director of the project. “The education that enables them to understand the nature of life better will enable them to realize how the Buddha taught us to live a peaceful, joyful, altruistic life where people can be happy.”

Better-educated nuns also help spread the dharma. Already, they are taking on increased teaching roles in their own Buddhist communities. Choegyal hopes to someday send nuns to universities to improve their English, enabling them to “express their knowledge and wisdom to an even wider audience.”