The strength of mind that comes from meditation, says Norman Fischer, can help us end the denial that keeps a world of problems spinning. 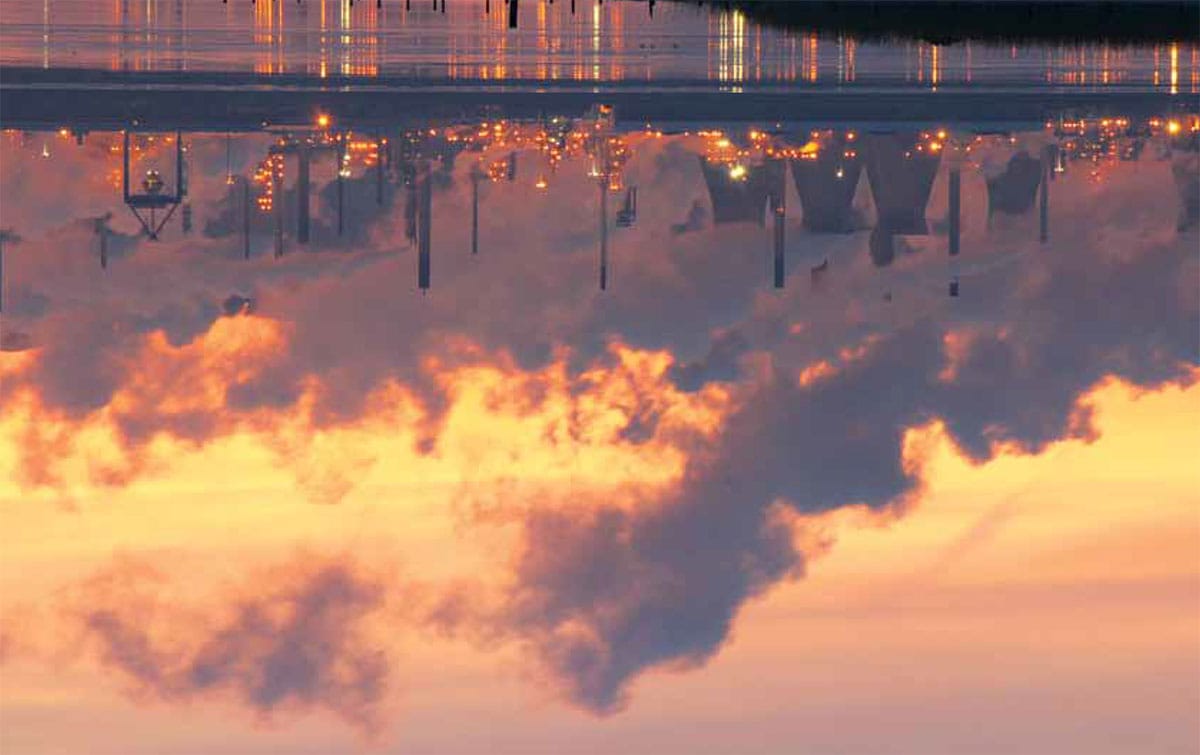 There’s an old Zen saying: “The world is topsy-turvy.” In other words, it’s an upside-down, crazy world. This may seem like an extreme statement, but only for a minute. If craziness means that we keep doing dysfunctional and destructive things, even when ensuing disasters are apparent, then it does seem that the world is crazy.

Who is not aware of this? Trevor Noah makes his living off it. But after we finish laughing, we start crying: the state of the world is painful to everyone. Yet the world careens onward in its topsy-turvy course, causing a pervasive sense of inward dread we can’t afford to entertain. This would explain the religious fanaticism, lunatic politics, myriad addictions, and other social and psychological aberrations that are so commonplace now. Deep down we all know the fix we’re in, but we can’t afford to face it. It’s just too much.

There are still people who deny the existence of human-caused climate change, though the scientific consensus is clear. We remain divided and confused. Is there a way we can digest, hold, and live with the scale of our current problems?

At present, several national economies are dangerously teetering. Jobs and basic social services are becoming scarce, governments are bankrupt, and the economic arrangements that have served us more or less (usually less) reasonably for so long begin to seem untenable. Behind this economic crisis, and the pain and injustice it has revealed, is a looming ecological crisis. The climate is certainly changing, yet there are still people who deny the existence of human-caused climate change, though the scientific consensus is clear. We remain divided and confused.

What’s the alternative to all this denial? Is there a way we can digest, hold, and live with the scale of our current problems?

The Buddha noticed that it is nearly impossible to take in all the suffering of the world, and yet there is no avoiding it. So he began his path with the insight that “all conditioned existence is marked with suffering.” The path to peace doesn’t come from avoiding suffering, he taught; it comes from facing and going through, rather than around, it. You can’t find peace in a troubled world by denying its trouble.

Meditation practice makes denial impossible and truth sustainable. It is impossible to sit on a meditation cushion for any length of time without noticing suffering, within and without. But as consciousness opens up little by little during the course of a practice life, it becomes big enough and resilient enough to see and withstand great difficulty. Though meditation practice may or may not help us produce rational solutions to seemingly objective problems, it does give us wide vision and deep stability in the face of difficult situations—and the courage to sustain the effort to do something about them, even against great odds. In trying times, these personal qualities may be just as important as rational solutions. Maybe even more important.

Joe Galewsky, an Everyday Zen priest from the Desert Mirror sangha in Albuquerque, is a climate scientist. A few years back, his studies took him to the polar ice caps of Peru, 18,600 feet above sea level, where he spent a full day at the margin of a melting glacier. “The overall experience of being in the presence of this glacier,” he wrote in his blog, “is one of immensity, stillness, and deep deep silence… The glacier is clearly melting, for sure, but I really experienced it in terms of the most basic Buddhist teaching of impermanence: All conditioned things arise, abide for a time, and pass away. As far as we can tell, this particular glacier has completely melted and regrown many times over the last hundreds of thousands of years. This impermanence is also very impersonal. It doesn’t matter what we think about it, or how we feel about it, or how we vote, or what we drive. This impermanence is simply the nature of things.”

Political, technical, and social action will bring the changes we need. There’s a lot of work ahead. This is where meditation practice and other forms of serious spiritual practice really help.

He goes on: “Don’t be too concerned for the earth, which is of the nature of continuous ongoing change, or for the glacier, which has come and gone many times in the past and will likely do so into the future, but for sure, we should be concerned about our fellow humans. As people, we are capable of a great deal of suffering, and climate change is likely to create a lot of suffering for people. I think that’s where we should place our emphasis in terms of where practice intersects climate change.”

Political, technical, and social action will bring the changes we need. There’s a lot of work ahead. Cages to rattle, courage and imagination to manifest. But we will need to sustain such effort over the long haul with compassion and clarity of vision if we hope to get anywhere with it. This is where meditation practice and other forms of serious spiritual practice really help. With it, we grow in our capacity for patience, fortitude, compassion, imagination, and love. Year by year, decade by decade, our practice helps us become mature, kind, capable individuals—the sort of people a troubled, crazy world will depend on to maintain stability and good cheer.

Beyond the personal qualities spiritual practice fosters are the valuable social skills it helps us develop. retreat practice teaches us to live simply, enjoy quiet, be perfectly happy with only a little, and live in supportive, harmonious community. These are skills the world at large lacks and sorely needs.

I lived for a number of years at Tassajara Zen Mountain Center, the San Francisco Zen Center’s monastic community in the Los Padres National Forest. We kept a demanding schedule of daily meditation, work, formal meals, and a round of daily ritual, living with no electricity, no heat, and very little personal time or space. Of necessity, we had to be self-sufficient, taking care of all cooking, cleaning, repair work, and so on.

While the life was rigorous and difficult to get used to, I felt happy and content there. I stayed long enough so the template of monastic life remains engraved on my spirit, a reference point for my life. Although my life now is more complicated, inside I still live at Tassajara. I know that if my material circumstances became reduced, I could be happy with less—maybe happier. I don’t need to panic when the stock market lurches or cower when it seems that our “way of life” might change in the future.

Here’s a good practice: if you have an extra room in your house, practice visualizing one or more of your friends or relatives living in that room. You may think it would be hard to live with lots of people, as our ancestors once did and people all over the world still do. Maybe so. But if—as we did as Tassajara, and as my wife and I often did later with our small children on rainy days indoors—you practice silent periods during the day and maintain simple rules for ethical and courteous conduct, then living together can be quite good. Maybe more satisfying than private living in private homes that are empty most of the time.

A few years ago I spent a day thinking about the future with a small group of engineers, social scientists, and political theorists. One of the engineers said that despite the enormity of the problem, climate change can be greatly meliorated, because the technical solutions to do it are available. But, he said, that makes no difference, since the political possibility of applying the solutions is pretty much zero. Ultimately, climate change—and probably all our social problems—are less technical than moral problems, a collective failure of imagination and courage, a narrowness of heart.

At the end of the meeting I said, “If we are in for hard times, it will go much better if our collective attitude is patience, kindness, love, and compassion, rather than panic and selfishness. So maybe the cultivation of these good qualities is really important now.” Everyone in the room seemed to agree. That would not be a crazy thing to do.