Gina Sharpe and Larry Yang share how the most diverse Buddhist teacher-training program in American history, now underway at Spirit Rock, came to be. 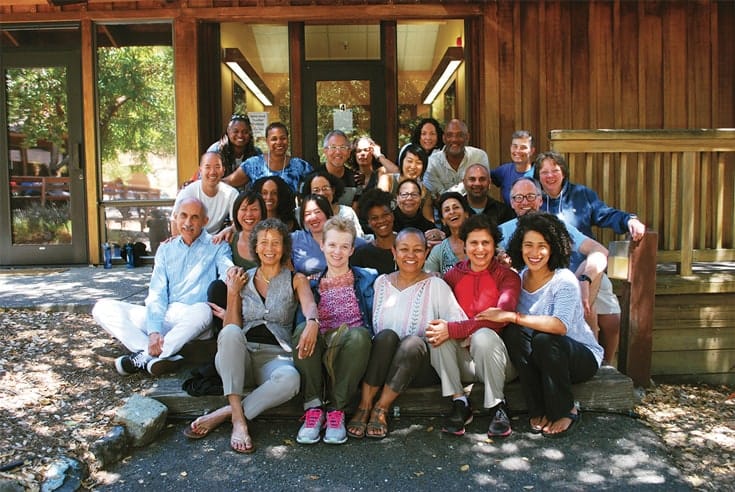 In nearly every sector of public life in the West, there remains a dearth of leaders from communities of color. And despite our best intentions and all our talk of liberation, Western-convert Insight Meditation communities have historically been no different.

While there have been a few token attempts in the past to cultivate individual teachers of color, the handful that do exist are the exceptions that prove the rule—specifically, the unexamined assumption that everything, including leadership, must be measured according to the standards of the dominant white culture. It has taken more than forty years for the idea of equity and inclusivity to finally break through to the surface in what has historically been a predominantly white community of practitioners exploring a faith tradition different from their cultures of origin.

As of this writing, there are only about ten self-identified teachers of color among the more than 350 trained dharma teachers in the Insight Meditation community. What message does this lack of diversity send? Given the often unspoken assumption that Buddhist teachers have achieved something that other practitioners have not—perhaps some deeper level of insight or compassion—could it suggest that people of color lack the wisdom or depth necessary to serve as a beacon to others?

This work will create an accelerated path for the dharma to reach those for whom access has been difficult.

Dharma practitioners and leaders of color hold this issue at the forefront of our minds and hearts. Having managed to survive a system that continues to favor white, heteronormative, able-bodied, upper-middle-class candidates for spiritual and dharma leadership, our diverse communities have worked collectively over the past twenty years to build a pipeline of experience, practice, and consciousness that promotes diverse participation in the dharma.

Communities of color and our allies in leadership have created—often outside formal institutional efforts—introductory and beginner classes, daylong events, weekend retreats, and residential retreats for people of color. These efforts have also included the initiation of fundraising to support POC practice and retreats, the inclusion of more people of color in governance at mainstream dharma institutions, and the work of influencing, designing, and developing community dharma leadership programs that open the door to more leaders of color.

To meet this urgent need for diversity, the two of us were invited by Spirit Rock teacher Eugene Cash to join the teaching team of the fourth Spirit Rock Community Dharma Leader (CDL) training program, which ran from 2010 to 2012. This CDL cohort was intentionally diverse, with 34 percent of the participants identifying as people of color, 30 percent coming from LGBTIQ communities, and a greater geographical diversity of participants than in previous programs. The program was designed to explore curricula that not only included classical dharma study but also encouraged reflection on the needs of the various communities in which people would be teaching.

This program began a decade of work toward a new system of leadership and teacher training that values diversity and inclusion. The expansion of the dharma into diverse communities continued in the fifth cycle of CDL training, which culminated in 2017 with 41 percent of participants from communities of color and 40 percent from LGBTIQ communities.

Then in September 2016, building on the groundwork laid during the two previous CDL trainings, the board of directors and community at Spirit Rock empowered us, along with our colleague Lila Kate Wheeler, to oversee the eighth Spirit Rock Dharma Teacher Training—the highest level of teacher training within the Insight Meditation tradition. Specifically, we were charged with creating fully authorized residential retreat dharma teachers and leaders representing diverse multicultural communities.

As we welcomed the future additions to our teaching community during our first weeklong teacher training retreat at Spirit Rock in July 2017, the mood was one of great joy, excitement, and optimism. Each participant selected to take part in the four-year training program identified as a member of a nondominant culture, whether by gender, race, orientation, ethnicity, or ability. With 90 percent of participants coming from communities of color and 55 percent from LGBTIQ communities, it is the most diverse cohort in the program’s history.

Participants started the process of knitting together the heart and mind of dharma and examining the roles of community leadership and activism into which they will be thrust as their training and experience evolve. They also began to form the collegial relationships and community of learning so essential to excellence in teaching and to modeling a life of integrity.

We who facilitated the retreat were profoundly moved by the historical implications of the moment. This great turning to inclusive dharma speaks, as the Buddha directed, in a manner appropriate to its immediate audience.

Bhikkhus, the word of the Buddha is not to be rendered into classical meter. Whoever does so commits an offense of wrongdoing. I allow the words of the Buddha to be learnt in one’s own language.

This work will create an accelerated path for the dharma to reach those for whom access has been difficult. It is a turning of the wheel of dharma into new cultural landscapes, bringing to life the vision of Thich Nhat Hanh, who declared “the next Buddha may be a sangha.”

It was a long road to get here. The idea that began with Larry Yang and Jack Kornfield during a 2012 Spirit Rock Teachers Council meeting was followed by four-plus years of difficult institutional, relational, and political negotiations with the two flagship organizations of our lineage: Insight Meditation Society (IMS) and Spirit Rock. We were able to gain institutional support from Spirit Rock, but that was not the case with the IMS, which chose a different design and path, making this outcome bittersweet. In August 2017, IMS launched its own four-year teacher training program with 75 percent of its trainees identifying as people of color.

In our first retreat, we laid the groundwork for the four years we will be together in training. We began with developing storytelling as a spiritual teaching skill. Participants shared their personal journeys not only as a means to sharpen that skill, but also to build and deepen connections with each other.

This was followed by presentations from scholars and teachers on topics such as the history of the dharma, a history of liberation in the Spirit Rock practice lineage, and personal histories of Spirit Rock’s founders. One session, “A History of Freedom,” included inspirational personal accounts of the march on Selma during the struggle for civil rights, as well as a Tibetan Buddhist scholar’s personal journey—woven into the story of Naropa and Milarepa—of growing up black in the American South. Finally, a panel discussion featured diverse teachers reflecting on how to teach with inspiration, faith, and aspiration.

Participants will be challenged to utilize their cultural, racial, sexual, gender, and class identities as part of their teaching, while at the same time understanding the emptiness of all formations of identity.

This is not watered-down dharma training shaped for social activists, nor is it “dharma-lite” intended for unfamiliar communities. Rather, it is designed to train teachers, in a broad and profound way, in consistent and ongoing practice as well as the study of Buddhist philosophy and thought from a scholarly and historical perspective in a way that illuminates and integrates that perspective into practice in this very life and cultural context. It is rigorous training that is robust and deeply transforming.

Over the next three years, participants will integrate textual dharma and experiential practice at a profound level. They will be challenged to utilize their cultural, racial, sexual, gender, and class identities as part of their teaching, while at the same time understanding the emptiness of all formations of identity. This training will foster an understanding that culture and language can either be barriers or pathways. Building on that recognition, we will provide ways to discern, encompass, embody, and go beyond the paradoxes of our practice and lives.

Contrary to the competitive model of individual attainment often reflected in Western Buddhism, we believe that true leadership is not solely a process of individual development or effort—such a view does not account for the collective needs of the community, nor does it fully serve future generations. In creating the next generation of dharma teachers, we cannot simply rely on familiar strategies that have been successful for only one particular community and generation. We must seek ways to empower spiritual leaders to hold and be of service to all practitioners, especially those generations to come.

Leaders from diverse communities need encouragement from all of us to come forward and share their dharma as teachers and leaders. If, as individuals and communities, we aspire to a higher vision of who we can be and collectively develop and support spiritual leadership that serves that vision, we can raise the communal level of our consciousness together. If we do this, the power of spiritual leadership will flow from individual to community and beyond, from generation to generation, and the dharma’s longevity will be enhanced. That shift is already happening. It can be felt, seen, heard, and understood in the tender hearts and brilliant minds of these teachers in training.

Larry Yang teaches meditation retreats nationally and is committed to creating access to the dharma for diverse multicultural communities. He is a Spirit Rock teacher and is a core teacher at the East Bay Meditation Center (Oakland) and Insight Community of the Desert (Palm Springs). His book Awakening Together is available at Wisdom Publications.