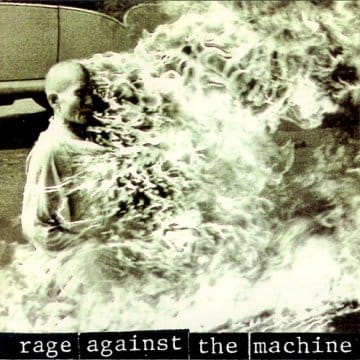 Rod Meade Sperry discusses the image of the burning monk on Rage Against The Machine’s 1992 album.

Outside of Howard Beale from the classic film Network, nothing in the popular culture’s consciousness conveys “I’m mad as hell, and I’m not going to take this anymore!” like the photo shown here, depicting Vietnamese Buddhist monk Thich Quang Duc setting himself on fire to protest his government’s oppression of his religion.

So it’s fitting that Rage Against the Machine, a band whose music embodied large-scale protest — on the corporation’s dime, much like Howard Beale! — would employ the image for its eponymous debut.  Rage weren’t Buddhists, but they knew that this photograph might make their already-long band name worth at least a thousand words.

In fact, the image turns out to be worthy of a $40,000 grant. After the jump, via Bates College: the story of Thich Quang Duc, and of Trian Nguyen, the Bates professor who hopes to more fully discover the monk whose 1963 self-immolation was not only one of the defining acts of the Vietnam War years, but one of the most significant images of the modern age.

On June 11, 1963, at a busy intersection in the South Vietnamese capital of Saigon, Buddhist monk Thich Quang Duc set himself on fire to protest the government’s discrimination against the nation’s Buddhist majority.

Captured in an Associated Press photograph that was distributed worldwide, this horrific act launched a series of events resulting in the fall of the Ngo Dinh Diem regime. Thich Quang Duc’s self-immolation also came to symbolize America’s unpopular involvement in Vietnam, and Malcolm Browne’s photo became an icon of the era.

Professor Trian Nguyen, who teaches art and Asian studies at Bates, has received an American Council of Learned Societies fellowship for field research intended to address what he perceives as the scholarly neglect in recent decades of this figure, who remains highly revered among Vietnamese Buddhists. Nguyen was one of 57 to receive the ACLS grant out of a pool of 1,136 applicants.

“Many questions related to this Vietnamese senior monk and his final act are still unanswered,” says Nguyen, assistant professor of art and visual culture and the Luce Junior Professor of Asian Studies.

In his project, Nguyen will study Thich Quang Duc’s personal items and letters, books, legal records and other documents kept at Buddhist temples in Vietnam, and some two dozen interviews with people involved in events around the monk’s self-sacrifice.

Culminating in the first full-length book about Thich Quang Duc in English, the research will bring to light significant new facts about the monk and his significance within the cultural context of the time. Nguyen hopes that the project will also reawaken awareness, within and outside Vietnam, of both the historic importance of the monk’s self-sacrifice and the existence of the research materials.

The completed work, Nguyen writes in his ACLS proposal, “will make a substantial and original contribution to the understanding of both this famous monk and Vietnamese Buddhist culture and history in the mid-20th century.”

The ACLS advances studies in all fields of the humanities and the social sciences, and aims to maintain and strengthen relations among national societies devoted to such studies.

Nguyen came to Bates in 2000 under the auspices of a grant from the Henry Luce Foundation, and is the first faculty member to teach Asian art history at Bates. He holds a doctorate in Asian art history from the University of California, Berkeley, and obtained his master’s degree in theological studies at Harvard Divinity School.

Nguyen’s primary research situates Buddhist art and architecture within the religious, political and social conditions of Southeast Asian culture. He has a particular interest in Vietnam. His teaching covers a wide range of topics in Asian art history, including the art of Zen Buddhism and Buddhist architecture, storytelling in Asian art and monuments of Southeast Asia.