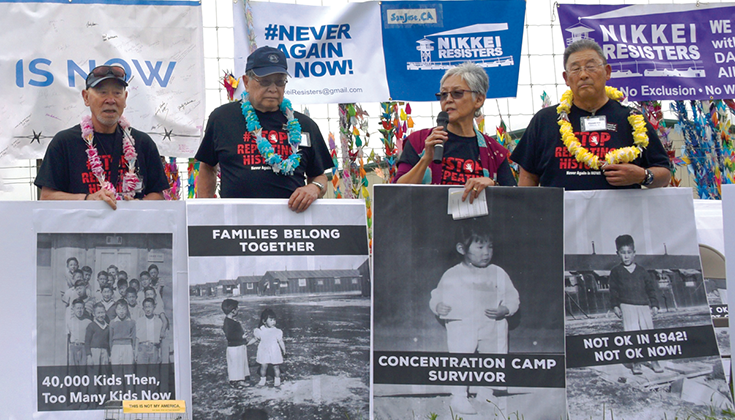 In March, I joined sixty other Japanese American and Japanese Latin Americans who paid homage to parents and grandparents who had been unjustly incarcerated during WWII at the Crystal City, Texas Family Internment Camp. We were reminded of the interconnectedness of all things as we proceeded to Dilley, Texas, where today 2,400 Central American women and children seeking asylum are being unjustly detained in prison facilities.

We wanted the children inside to know that someone outside cared. We wanted the world to know that we will not be silent when people are suffering at the hands of a cruel and unjust government policy so resonant of our own family experience.

I was already too familiar with the suffering happening behind the fences of such detention centers. Three years ago, a young Japanese American attorney working in the ACLU National Prisons Project, himself a descendant of internees, asked me if I would enter the detention facility in Karnes, Texas, working undercover as a “religious volunteer.” My task was to “visit” with mothers and their children while assessing them for symptoms of trauma.

After several visits, there was no doubt in my mind that the trauma being inflicted on families in the dehumanizing prison environment is causing lasting affects on the emotional well-being of both mothers and children. Here is a poem I wrote after interviewing a Guatemalan mother and child inside the Karnes detention facility in 2016.

You told me about the rogue gangs who murdered your husband,
taking your money after selling tortillas on the streets all day.

So you gathered your family and friends one night.
They each brought what little money they had.
The coyote arrived, promising safe passage.

He tells you, “When you see the man with the big hat,
Put your empty hands in front of you and they will take care of you.”
But coyote disappeared before reaching the border.

You were lost without food and water for three days.
Finally you see the man with the big hat.
Your children cling to you.
You put your empty hands in front of you.
You hear the snap of handcuffs on your outreached hands.
They let their dog menace your terrified child.
They put you and your children in the “icebox,”
A cement floor with no blanket.

You have been in the “family residential center” for nine months.
A prison with steel bars, guards with guns, cribs in cells.
Rows and rows of tiny shoes stocked in the supply room.

You tell me your nine-year-old son was separated from you.
You have not seen him since you arrived.
Your daughter refuses to go to school.
She tells me she’s afraid one of her friends will be gone.
And where do they go?
She answers, “Deported back home and murdered.”

You tell me she has night terrors, waking from sleep crying
and trembling.
She tells me she sees the giant dog bearing down on her.

You tell me she’s losing weight and won’t eat.
And you tell me they put black pepper all over the food,
that the water tastes bad.
While the guards have water bottles hanging from their belts,
the FDA approved the drinking water where fracking machines
surround the “family residential center.”

The guard stands and announces, “Time’s up!”
The little girl bolts straight up, marches to the locked door.
You wipe your tears with the back of your hand and say,

Here is what I wrote about our collective experience at the Crystal City Pilgrimage and Protest in March:

We Came Back for You

We came back for you because…we know mass incarceration.

We came back for you because…we know family separation.

We came back for you because…we know deportation.

We came back for you because…we care.

Some say, “It’s not our fight, it’s not the same.”
But we say incarceration of innocent people is inhumane,
we say mothers and children are not to blame.

Back in 1942, we disappeared.
Empty chairs in the classroom,
empty homes, shops, and farms.

America turned their backs on us.
No one marched, no one protested,
there were no petitions, there was no outrage.
Silence filled the empty spaces of our invisibility.
Silence was the scourge of our trauma.
Silence filled our hearts, our homes, our community so…

We came back to let you know that we will not forget you.

We came back to drum our message loud and clear.

We came back to hang paper cranes of hope and caring.

And in return you reached into your brown paper bag
and tied a string bracelet to my wrist,
You pushed a tortilla through the chain-link fence,
You welcomed us wearing ties and hats,

You even saved a rock from the old swimming pool,
placed it in my hand, saying
You had been waiting years for me to come back.
Your big brown eyes stared up at me as tears welled up in mine.

Little child, you are me. I am you.

We will not forget you.
We will not be silent.
We will come back for you.
And we will bring others until you are free!

Satsuki Ina, PhD, was born in the Tule Lake Segregation Center, a maximum security prison where Japanese American dissidents were held during WWII. She is Professor Emeritus at California State University, Sacramento and has a psychotherapy practice specializing in community trauma.