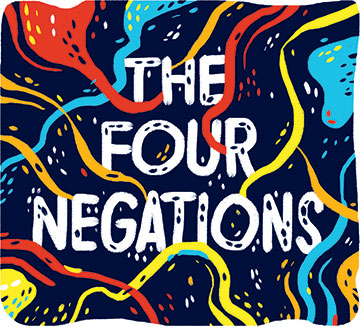 According to Mahayana Buddhism, any concepts we have about the basic nature of reality are incomplete, inaccurate, and in fact block our direct experience of things as they really are. The Middle Way (Madhyamaka) philosophy pioneered by the Indian Buddhist philosopher Nagarjuna (2nd–3rd century CE) uses reason to negate our mistaken concepts about reality. Take a pair of opposites, such as real and unreal. Madhyamaka logic looks at four possibilities—that things are either real, unreal, both, or neither—and refutes them in turn. So in this case, the four negations are:

3. Not both real and unreal.

4. Not neither real nor unreal.

Another way we can look at reality is as one (or “oneness” in spiritual terms), as many separate things, or as any combination thereof. So the four negations are:

4. Not neither one nor many.

You can practice Madhyamaka by studying its logical arguments why any assertions about the nature of reality are self-defeating. You can also use it as a kind of koan practice. Accept, for the sake of argument, that things are not real, unreal, both, or neither. Contemplate where that leaves you. In either case, the Middle Way philosophy cuts through conceptualization and points you directly to the true nature of reality.