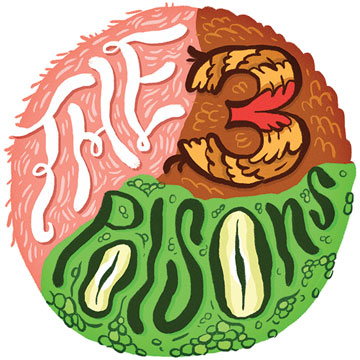 The three poisons are the energy of ego’s three basic attitudes—for me, against me, and don’t care. All unwholesome states of mind (kleshas) are variations on these three themes. Because the poisons drive our suffering, they are traditionally depicted as three animals—a rooster, snake, and pig—at the center of the wheel of life.

Passion (also called attachment, greed, or lust): Whatever feels good we want more of. Above all, ego is attached to whatever ensures its survival—physically, psychologically, or spiritually. At the same time, passion has in it the seeds of love and connection, and so of the three poisons, it offers the best path to enlightenment.

Aggression (aversion, anger, hatred): We try to repel anything we believe will hurt or threaten us. Because we are willing to hurt others to protect ourselves, even on a massive scale, aggression is the greatest cause of suffering. In the Vajrayana school of Buddhism, its energy is seen as wisdom when self-interest is removed.

Ignorance (indifference): If you’re not for me or against me, you don’t matter. This is not the basic ignorance of solidified, dualistic reality that is the foundation of samsara, but it is what enables people to prioritize their own pleasure over the suffering of billions of others. There is no real potential for enlightenment in this indifference.